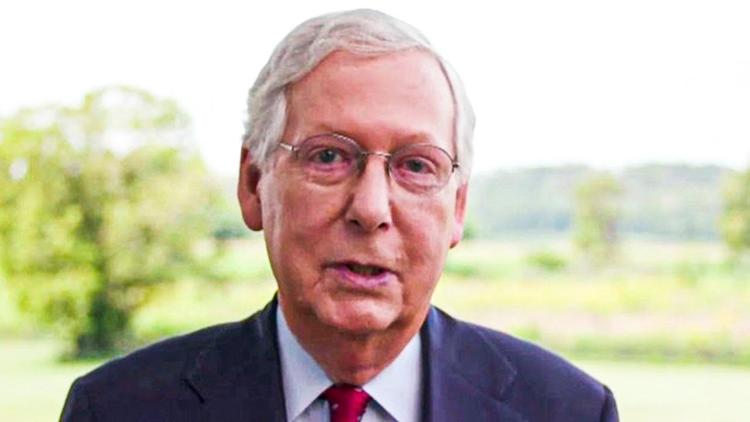 ( Otherwords.org ) – The Senate GOP leader’s refusal to pass COVID-19 aid without corporate immunity should be the scandal of the year. By Thom Hartmann | December 16, 2020

Probably the most under-reported story of the year has been how Mitch McConnell is holding Americans hostage in exchange for letting big corporations kill Americans without any consequence.

Mitch took you and me hostage back in May, when the House of Representatives passed the HEROES act that would have funded state and local governments and provided unemployed workers with an ongoing weekly payment.

Mitch refused to even allow the Senate to discuss the HEROES Act until or unless the legislation also legalized corporations killing their workers and customers. That is, McConnell wants to make it impossible to hold corporations legally accountable for COVID-19 infections caused by poor safety practices.

To this day, McConnell refuses to let the HEROES Act even be discussed in the Senate.

Meanwhile we’ve seen companies firing people for refusing to take their lives in their hands, executives organizing real-life betting pools on which employees are going to die first, and companies lying openly to their workers and customers about the dangers of COVID-19.

Mitch McConnell wants to protect them all. Even worse, his immunity can extend well beyond the pandemic and sets up a process that could put corporations above the law permanently, across every community in America, in ways that state and local governments can never defy.

While Republicans have fought against raising the minimum wage or letting workers unionize for over 100 years, what McConnell is doing now is giving corporations the ultimate right: the right to kill their employees and customers with impunity.

And McConnell’s holding your local police and fire departments, public schools, and state health care programs hostage in exchange for his corporate immunity.

This is beyond immoral. This is ghastly, and should have been at the top of every news story in America for the past six months. But many of the corporations that are looking forward to complete supremacy over their workers include the giant corporations that own our media.

America has suffered for over 40 years under Reaganism’s mantra, picked up from Milton Friedman, that when corporations focus exclusively on profit an “invisible hand” will guide them to do what’s best for people and communities. It’s a lie.

This is an assault on workers’ rights. But even greater, it’s a corporate assault on human rights. McConnell is saying that a corporation’s right to kill its workers and customers is more important than the lives of human beings.

As unemployment benefits are running out, evictions loom, small businesses are dying left and right, millions of families have been thrown into crisis, and more than 10 million Americans have lost their health insurance, McConnell continues to hold us all hostage.

It’s time to fight back. If corporate media continues to refuse to discuss McConnell’s blackmail, we must individually speak up among friends and communities, and also let our lawmakers know what we think. It’s time to raise some hell.

Thom Hartmann is a talk-show host and the author of The Hidden History of Monopolies: How Big Business Destroyed the American Dream. This op-ed was adapted from CommonDreams.org and distributed by OtherWords.org.

Thom Hartmann is a talk-show host and the author of The Hidden History of Monopolies: How Big Business Destroyed the American Dream. This op-ed was adapted from CommonDreams.org and distributed by OtherWords.org.

Via Otherwords.org , adapted from Commondreams.org.

Thomas Hartmann is a talk-show host and the author of The Hidden History of Monopolies: How Big Business Destroyed the American Dream.