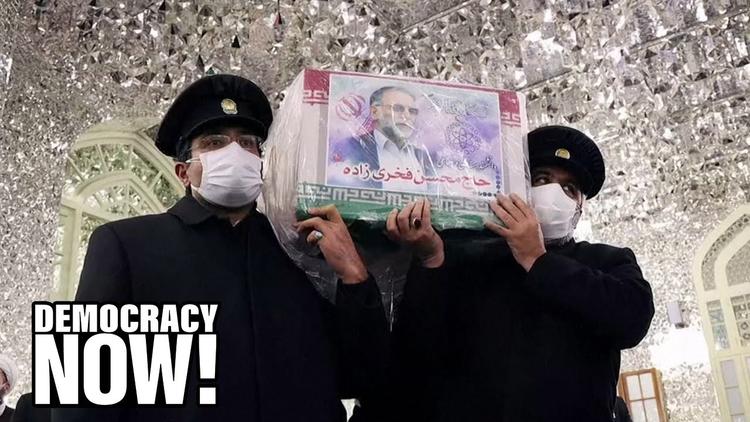 I don’t guess I’m thanking Israel for committing a flagrant act of terrorism. If Israel can murder a scientist in Iran, what is to stop it from murdering people it doesn’t like in other countries, including in the United States?

Former director of the CIA, John Brennan, put the reasons for our shocking ingratitude succinctly:

This was a criminal act & highly reckless. It risks lethal retaliation & a new round of regional conflict.
Iranian leaders would be wise to wait for the return of responsible American leadership on the global stage & to resist the urge to respond against perceived culprits. https://t.co/0uZhyBTM3S

I do not know whether a foreign government authorized or carried out the the murder of Fakhrizadeh. Such an act of state-sponsored terrorism would be a flagrant violation of international law & encourage more governments to carry out lethal attacks against foreign officials.

Brennan pointed out that in international law there is a difference between killing a member of a non-state terrorist group and simply murdering the citizen of a sovereign country.

By going public in this way, I suspect Brennan is trying to give the incoming Biden administration officials cover to distance themselves from Israel’s action. Brennan’s former deputy, Avril Haines, has been named by Biden the incoming CIA chief.

Brennan called Trump’s breach of the 2015 Iran nuclear deal signed by the permanent members of the UN Security Council and Germany “the height of folly” and a “disaster.” This is because Brennan knows that the Joint Comprehensive Plan of Action or nuclear deal closed off all four plausible paths for Iran ever to weaponize its civilian nuclear enrichment program. By destroying the treaty, Trump has left Iran free to enrich to higher levels, with more and better centrifuges than the treaty had allowed.

Israeli officials at least say that they do not accept this firm international consensus, and want to destroy the JCPOA because they hold it provides cover for a secret Iranian weapons program. This is no doubt a guilt complex speaking, since Israel has dozens of atomic bombs that it made clandestinely while promising Presidents Kennedy, Johnson and Nixon that they would never do such a thing. The difference is that the UN inspection regime in the JCPOA is rigorous, and no country under its inspections has ever developed a nuclear bomb. Israel on the other hand never accepted inspections, and so was free to make its deadly arsenal.

By going nuclear, Israel started an arms race in the Middle East that has cost the United States trillions of dollars. Iraq’s 1980s nuclear enrichment program was in response to the Israeli Bomb, and that Iraq so much as did those (failed) experiments helped lead to the disastrous 2003 Bush invasion and occupation of Iraq. Now we are going around about Iran and could well end up at war with it, a war Israel is goading Washington on to.

With the murder of Fakhrizadeh, its responsibility for which Israel is leaking to the New York Times, the government of Benyamin Netanyahu joins a rogues gallery of backers of state terrorism who kill civilians abroad.

They include Kim Jong-Un of North Korea, who had his half-brother, Kim Jong-nam poisoned to death at Kuala Lumpur International Airport in February, 2017.

Or there is the Saudi government, whose hit squad smothered Washington Post columnist Jamal Khashoggi to death in an Istanbul consulate on October 2, 2018 and then cut his body up with a bone saw.

And then there is Vlad “the Poisoner” Putin, who enjoys using toxins only a government has access to in order to signal his responsibility, even while denying it orally.

Here is the kind of thing Brennan was talking about: Both the Geneva Convention and the Rome Statute that governs the International Criminal Court forbid the murder of non-combatants. Dr. Mohsen Fakhrizadeh was a civilian. This action is a war crime, and if it is pursued systematically, it is a crime against humanity.

In 2010-2012, four other Iranian scientists were murdered — Masoud Alimohammadi, Majid Shahriari, Darioush Rezaeinejad and Mostafa Ahmadi Roshan, also likely by Israel through agents it ran inside Iran. So this activity does seem to be systemic and therefore is a crime against humanity.

The alternative to the 2015 Iran nuclear deal is, at some point down the road, war, which is what Netanyahu is plumping for. Only he is trying to goad the US into fighting that war for him.