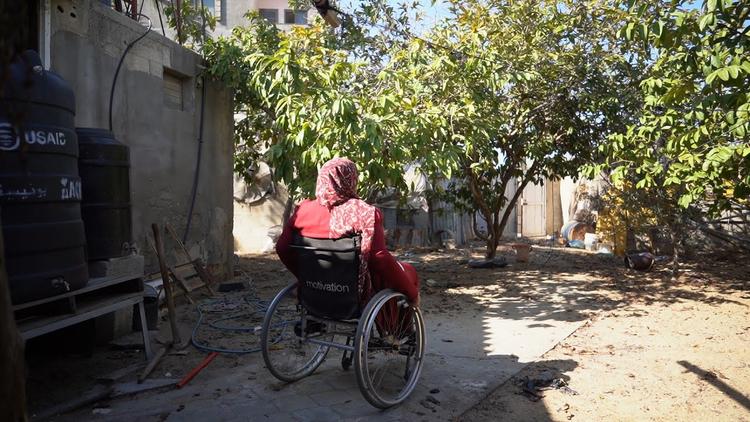 “I think I wouldn’t have achieved so much in my life without my disability,” said Doaa Qashlan, a university graduate and disability rights activist living in Gaza. Doaa, who was born with a physical disability and uses a wheelchair or an electric mobility scooter to move around, has a supportive family. She even became the first in her family to travel abroad. But back home in Gaza, life has been increasingly difficult.

Doaa uses her mobility scooter to get around the inaccessible streets of Gaza. “They’re my legs,” she says of her assistive devices. A few months ago, Doaa’s scooter was damaged. She has still not been able to fix it, she says, as many necessary parts can’t be found in Gaza and there’s a lack of expertise to repair damaged devices. In part this stems from sweeping Israeli restrictions on the movement of goods and people into and out of Gaza. Today, Doaa says, she feels trapped at home.

Doaa nonetheless maintains a sense of humor, resiliency, and a hope to see things change. She is a member of the Public Relations and Media Board of the Palestinian General Union for People with Disabilities and has collaborated with international and local organizations in Gaza to raise awareness on disability rights. Her work is a testament to her perseverance. Still, life in Gaza can be hard.

New research released on the International Day of Persons with Disabilities describes how Israel’s 13-year closure and Hamas authorities’ lack of services or efforts to make public spaces accessible contribute to making life extraordinarily difficult for tens of thousands of Palestinians with disabilities in Gaza. “The situation [in Gaza] is already dire,” Doaa said. “You see how people in Gaza suffer? People with disabilities suffer double.”

Electricity outages are Doaa’s biggest daily worry. She must keep her mobility scooter charged. But Gaza’s chronic power outages, a product of restrictive Israeli policies and squabbles between Palestinian authorities, leave residents with as little as five hours of electricity per day and up to 15 hours on the best days. For Doaa and other people in Gaza with disabilities, these electricity cuts present serious obstacles to daily life – especially for those who rely on equipment powered by electricity, such as elevators and electric mobility scooters.

Even when she can leave home, Doaa struggles with living in a relatively inaccessible area where it can be difficult for her to move about, and many in her community do not understand her needs. “Our neighbor built a speedbump in our area to slow cars down. He wasn’t aware that this could injure us.” 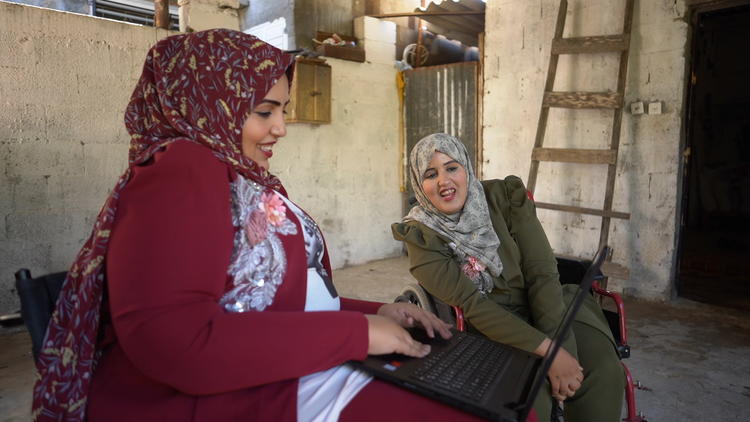 Doaa Qashlan and her sister Abeer look at a laptop during an interview with Human Rights Watch, November 18, 2020. © 2020 Yousef Mashharawi.

Doaa, like others with disabilities in Gaza, particularly women, faces deeply entrenched stigma. There are little to no job prospects and their social circles run small. Even things society places high value on, like marriage, are largely out of reach. For Doaa, this stigma is a constant source of frustration. “One day, a group of girls were speaking about marriage. They mentioned that a girl with a disability got married. One of them jokingly asked, ‘I wonder how she got married?’ I got angry and asked her, ‘Has anyone asked you how you would get married?’ The girl did not reply.”

Even getting an education presented challenges for Doaa, each step of the way. By grade five, Doaa’s muscles had begun to severely weaken and walking became challenging. She recalls an incident in grade six, when she used a walker. “I wanted to go to the bathroom. In order to reach the toilet, I had to walk a long distance on an unpaved, rocky path. Some students pushed me while I was walking, and I fell down and wet myself.” When her father came to get her, he took her out of school. It was only at her mother’s insistence – her mother even left the house until her father relented – that Doaa returned to school.

Doaa’s mother is a constant source of strength for her and her younger sister Abeer, who also has a physical disability and uses a mobility scooter. When Doaa went back to school, she would arrive early to change from her mobility scooter to her wheelchair, and sometimes her mother would go over schoolwork with her while they waited for class to begin. One day, a group of people saw them, and one of them said to Doaa’s mother, “Why are you teaching her, you think she will succeed? She’s half human, go and give birth to a complete human.” Doaa says that when she used to feel depressed and didn’t want to go to school at all, sometimes counselors would visit her for psychosocial support. Later Doaa found out her mother had been arranging for that herself.

Doaa received an opportunity to attend a training program in the United Arab Emirates through a United Nations program for young people with disabilities. But after two years, Doaa made the difficult decision to return home. She was distraught coming back to Gaza but enrolled in a university program in office administration. At one point, Doaa had to leave university for a year because she and Abeer had to share one mobility scooter between them, and Abeer needed it to finish secondary school.

Having a disability in Gaza can sometimes be life-threatening. During the war in 2014 between Israel and Palestinian armed groups, Doaa was constantly afraid of being unable to escape danger in the event of an Israeli airstrike. “Each time I got into the bathroom, I was afraid if a nearby escalation took place and I needed to flee quickly, I couldn’t. I was already slow.” Doaa and her sister would sometimes even hear family members say things like, “Your family might flee and forget you at home.”

During the war, Doaa’s and Abeer’s family did have to evacuate from their home. They went to live with their aunt, whose home was not accessible. Doaa was not able to use her wheelchair in the house and had to crawl to move about. But she was embarrassed to do so in front of her male relatives in the house, so would avoid moving when they were home.

And what if she and her sister needed to flee or quickly escape a building that came under attack? The stress of the fighting, compounded with not knowing what would happen to her and Abeer should their family have to evacuate, weighed on her emotionally. “The most difficult thing was when I heard my sister say, ‘I don’t want to die and leave you on your own. I don’t want you to die and leave me on my own.’”

Today, Doaa draws hope from her friends, all of whom also have disabilities, and from her desire to see the situation change in Gaza. Before her scooter was damaged, Doaa would spend her time at the General Union to work on disability rights-related activities or attend training sessions. She is excited about efforts by local organizations that can help people with disabilities, specifically women and girls. “Focus on youth and a double focus on girls. Girls need support because they’re incredibly marginalized. They need to get a space to speak out.”

One organization has made a huge difference in her life already. Recently, the nongovernmental group Humanity and Inclusion enhanced Doaa’s home to make the kitchen and bathroom more accessible. “Now I am able to get into the kitchen and make food for me and my family.” This small improvement left an enormously positive mark on Doaa’s life, highlighting how such modest efforts to improve accessibility can go a long way to relieving the immense barriers that people with disabilities face just trying to live independent lives.

When asked what Israeli and Palestinian authorities should do for the tens of thousands of people with disabilities in Gaza, Doaa had one simple message: “Remember we are humans.”