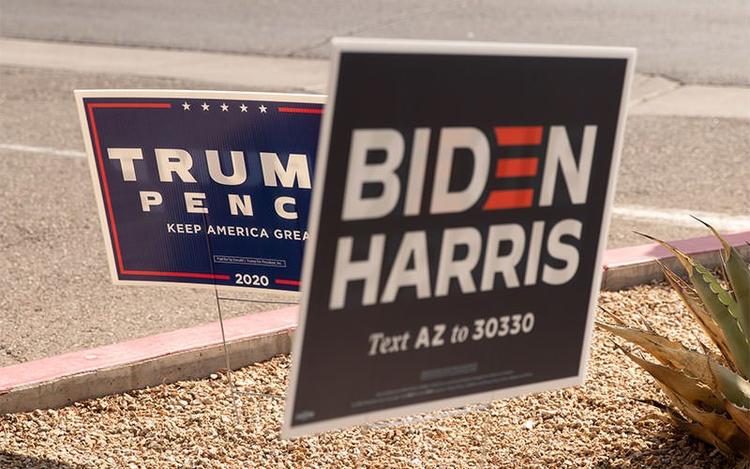 ( Cronkite News ) – WASHINGTON – For years, Democrats have argued that Arizona was about to turn blue, and this year they came closer than they had in decades, winning the presidential race and unseating an incumbent Republican senator.

Close, but not the “blue wave” Democrats had been hoping for.

While they grabbed the

“This year’s election does not signify a blue wave because Democrats didn’t win up and down the ballot in Arizona,” said Kim Fridkin, foundation professor of political science at Arizona State University.

Or, as Republican political consultant Jason Rose put it, the blue wave was more of “a wave that you might see at the bay, not the ocean.”

Still, Democrats see progress in the two big wins they did get. Yara Marin, the Arizona state political director for Mi Familia Vota, said even though “the blue wave didn’t trickle down the ballot, I want to really … state that this still is a historic moment.”

That historic moment was highlighted last month when Sen. Mark Kelly, D-Ariz., was sworn in to the seat that had been held by Republican Sen. Martha McSally and, before her, by Sen. John McCain, a Republican icon. Kelly joins Sen. Kyrsten Sinema, D-Ariz., to give the state two Democratic senators for the first time in almost 70 years.

And, despite desperate attempts by state Republicans to block it, the state cast its 11 Electoral College votes for President-elect Joe Biden, who beat President Donald Trump by 10,457 votes, the first time a Democratic presidential candidate has won in Arizona since 1996.

Despite those wins, the rest of the ballot stayed mostly red. Democrats still hold five of nine congressional seats, but missed what many thought was their best chance to knock off a Republican this year when Rep. David Schweikert, R-Fountain Hills, beat well-funded Democratic challenger Hiral Tipirneni by more than 18,000 votes.

In Maricopa County, the state’s largest jurisdiction, Democrats saw election night leads in county attorney, school superintendent and board of supervisors slip away, while the GOP unseated County Recorder Adrian Fontes, a Democrat.

The kind of split-ticket voting that gives a state two Democratic senators but a GOP-controlled Legislature is new, Rose said.

“It shows you how pronounced some of the frustrations were with the president,” he said. “It also speaks not just negatively but positively about a candidate like Mark Kelly, who is a political rock star in any cycle.”

But Fridkin argues that “prior to the rise of polarization during the last few election cycles, we did see a fair amount of ticket splitting.”

“It could be the case in this election that independents and Republicans – and maybe some Democrats – who voted for Biden wanted Biden to win, but they also wanted Republicans in Congress to be able to control Biden somewhat,” she said.

While the blue wave did not ultimately materialize, the possibility made Arizona highly prized battleground state.

Jessica Taylor, Senate and governors editor for the Cook Political Report, argues part of the state’s newly found competitiveness can be attributed to changing demographics.

“It was clearly a shifting state in terms of demographics, and one that started to flip in 2018 after decades of not doing so,” Taylor said. “I think, clearly, Democrats … thought it’s right for both the presidential level and the Senate level, and I think that paid off for them.”

Extending the 2020 gains could be a challenge, said Rose, who noted that Kelly is up for re-election in 2022 and will have to keep fighting for the seat.

“Just because the Democrats did well this year, that doesn’t guarantee them those same votes in a couple of years,” he said. “The political pendulum might come back against him.

“The political marketplace often convulses and it corrects,” Rose said. “In this case, I mean, we had a mixed result, with the Democrats certainly doing well in Arizona at the top of the ticket, but struggling a little bit down.”

Marin agreed that Democrats will have to keep fighting. She said the work of community organizations to reach minority communities within the state “helped bring what blue wave we did see in November.”

“This election is kind of evidence and a result of those years of hard work. It just didn’t go all the way down the ballot,” she said.

Catherine Fusillo is from Houston and expects to graduate with bachelor’s degrees in journalism and political science. She has been a political reporter at the State Press and an intern at KUHF in Houston.