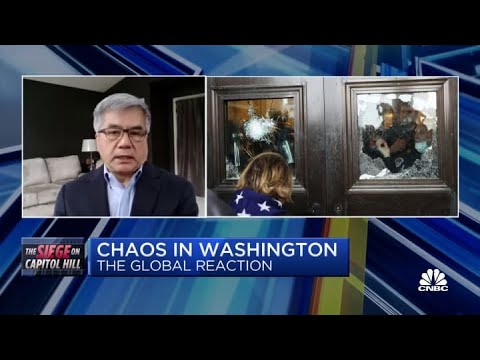 Ithaca, NY (Special to Informed Comment) – Given the mutual recriminations that characterize the sorry state of US-China relations as of late, it is hardly surprising that China’s state media should pounce on the humiliating optics of US democracy under siege. Indeed, one need only retransmit US mainstream media reports about a demented US president inciting rabid followers to ransack Congress to produce a vivid indictment of contemporary US politics.

The January 6, 2021 “incident” has gotten ample coverage in the Chinese media, though, perhaps against expectations, much of the reporting has stuck to known facts and is generally fair and balanced.

One glaring exception to the generally even-handed coverage of turmoil in the US capital concerns an out-of-context quote by US House Speaker Nancy Pelosi which has been twisted to suggest she found beauty in the vandalism and violence in the “riots” that beset Hong Kong in July and August 2019.

The quote is not in question, she did in fact describe a mass gathering in Hong Kong as “a beautiful sight to behold.”

But she was not talking about riots, violence in the streets or the takeover of the Legislative Council; her quote predates all of that. Yet somehow, the notion that she condoned mob violence as a thing of beauty has a seemingly unstoppable life of its own. The idea of karma coming home to roost is a compelling ‘gotcha’ narrative, even if the assertions it is based on have been misconstrued.

The first weaponized use of the Pelosi quote in reference to the Capitol attack that I have found comes from quirky, staunchly nationalistic Beijing tabloid.

Global Times Editor Hu Xijin was an early adopter, if not the initiator, of the incorrect observation that Pelosi was praising Hong Kong violence when she invoked the term “beautiful sight,” though in fact she was talking about something altogether different.

Hu Xijin, despite his reckless, and often careless characterizations, gets quoted far more often than he deserves to. As a state-sanctioned curator of outrage, his intemperate views make for colorful copy.

For better or worse his newspaper outlet, conveniently published in English, has become something of a global go-to source for quotes about “what China is thinking.”

Global Times is state media, linked closely with the People’s Daily, so it is not entirely wrong to imagine that opinions published under Hu’s byline reflect official thinking to some degree. But his column also bears the idiosyncratic imprimatur of a single individual, a firebrand who has at times found himself on the wrong side of the party line, though not often enough to diminish his usefulness.

Hu’s hawkish remarks can be seen as nationalist blather, but they are also test balloons. His virulent takes on circumscribed topics vents views not easily expressed in the tightly scripted world of Chinese diplomacy. With the rise of wolf diplomacy, however, as epitomized by often undiplomatic Hua Chunying and her associate Zhao Lijian, Hu Xijin is not a lone voice in the wilderness, either.

Hu Xijin’s appropriation of of Pelosi’s “beautiful sight” quote got ample play around the world, mentioned in Reuters, CNBC, Fox News, Time, Variety, Indian Express, Ahmedabad Mirror, New York Post, Independent and so on, but the place where his mockery is most volatile is on social networks where the meme, bite-size and digestible, feeds frothing commentary.

Hu posted a photo montage on his Twitter account on January 6 comparing violent scenes from the HK protests with violent scenes in Washington, DC. He takes on Pelosi directly, pairing a photo of a street aflame in HK adorned with her words, “a beautiful sight to behold.”

Next to that, a shot of a bearded protester sitting in Nancy Pelosi’s office chair is snarkily captioned, “seat occupied.”

The following day, Foreign Ministry spokesperson Hua Chunying linked coverage of events in HK and DC, making a direct reference to the quote first brought up by Hu Xijin:

“Back then, what words did they use to describe the Hong Kong protest? ‘Beautiful sight’.”

Lu Xiang, a US affairs specialist at the Chinese Academy of Social Sciences, was quoted on the topic that same day in the South China Morning Post. Inadvertently or not, he also echoes the meme launched by Hu Xijin.

“The US double standard will eventually hurt itself, because when they beautify violence in other places, it is actually fanning its own citizens. The bipartisan hypocrisy on this point is clear.

As the mean-spirited meme gained traction, Hu Xijin doubled down, retweeting his provocative message in full: “Speaker Pelosi once referred to the Hong Kong riots as “a beautiful sight to behold” — it remains yet to be seen whether she will say the same about the recent developments in Capitol Hill.”

Foreign ministry spokeswoman Hua Chunying, not known to mince words, spoke extensively on the topic of comparing violence in HK and DC in her January 8 press briefing, but the English transcripts of her comments make no mention of the “beautiful sight” quote. Perhaps she dropped it in respect to diplomatic protocol. Perhaps she was aware that House Speaker Nancy Pelosi originally made that comment in reference to a June 4th candlelight vigil, a topic that she would not relish debating with a roomful of Western journalists.

In either case, the out-of-context quote probably got more play in the Western media than in China.

Pelosi did indeed utter the famous words “beautiful sight” in reference to a crowd scene in Hong Kong, but she was looking at a photo of a mass candlelight vigil just held in Hong Kong. The gathering was huge, but orderly and peaceful, without a hint of vandalism or violence.

The candlelight vigil was not about Hong Kong, but staged in memory of the Beijing demonstrators who lost their lives in the Tiananmen demonstrations on June 4, 1989. Hong Kong, to its credit, is one of the few places in the Chinese world where this important event is openly remembered, an event which communist party censors have done their best to erase from public discourse, or frame in the worst possible way.

The voices and images of Capitol Hill, bastion of US democracy, under attack will not soon be forgotten. But it is also worth remembering that it was President Trump’s cocktail of lies, twisted quotes, and incendiary untruths that fired up the mob in the first place. Hua Chunying is correct in pointing out that words we use to describe political incidents matter a great deal. But she does injustice to her own point by quoting a misappropriated Pelosi quote that was willfully ripped out of context by media maven Hu Xijin.

Deliberately twisting a well-documented quote about the serene memorial of an event that cannot be discussed openly in China, and then pretending or imputing that it was a reaction to unrelated political acts of violence (which took place many weeks later) is plainly dishonest.

A demonstration can be a beautiful thing, as the photographic images of the peaceful candlelit June 4 vigil readily attest.

But the memory of that mournful event has been vandalized in the service of a false narrative propagated by agents of the communist party of China, and that is the ugly truth.

CNBC: “China is laughing at us because of yesterday: Fmr. ambassador”

Philip J. Cunningham has been a regular visitor to China since 1983, working variously as a tour guide, TV producer, freelance writer, independent scholar and teacher. He has conducted media research in China as a Knight Fellow and Fulbright Scholar.