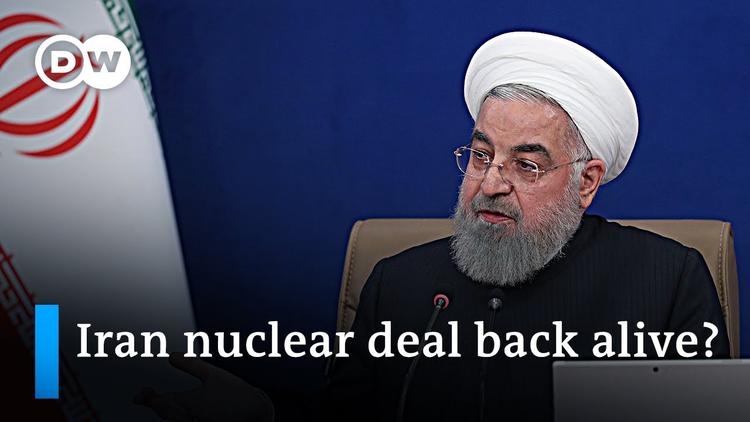 Ann Arbor (Informed Comment) – Two and a half days into the Biden administration, it is already clear that the Problem of Iran is going to loom large over its foreign policy.

There are already hard liners and moderates in the Biden team, just as there are in Iran. The first few Biden appointments, Antony Blinken as secretary of state and Jake Sullivan as national security adviser tilt to a hard line. They are on record as saying Iran has to come back into compliance with the 2015 nuclear deal before they will talk to Tehran. The deal was technically called the Joint Comprehensive Plan of Action and by the way, it was signed with the UN Security Council, not just with the US.

They also want Iran to be willing to negotiate about its ballistic missile program, though they don’t say they will make it a prerequisite for restoring the JCPOA.

If Blinken and Sullivan stand by what they’ve recently said, and if they aren’t just staking out an initial bargaining position, then there really isn’t much difference between their policy toward Iran and that of the Trump administration.

Since Iran was in compliance until May, 2018, when Trump trashed the treaty, and since Iran never received the sanctions relief in return for which Iran mothballed 80% of its civilian nuclear program, for the US to be making the demands here is rich.

Now it is being bruited about that Biden may tap Rob Malley, the CEO of the Crisis Group and a former Obama Middle East adviser, to take the lead on Iran. negotiations. Malley recently told The Financial Times he advised against “opening up” other issues than the original nuclear one: “As soon as you start opening anything up . . . you complicate it and by definition then you’re in a longer negotiation and you run the risk of during that period of seeing things go sideways.”

Malley’s is the sensible position here, and it will be a great good thing if he is given charge of Iran negotiations. He’s proven in the past that he values negotiation over bluster and is willing to take diplomatic risks to make peace.

Malley was immediately viciously attacked by all the Neoconservative usual suspects, who seem to want to pull the US into a war with Iran. That is another point in his favor.

Iran has elections in June that the hard liners are expected to win. This win will be courtesy the United States, which screwed Iran over on the nuclear deal by not only keeping sanctions on the country but then even preventing it from selling its oil, and ruining its economy. All this, even during the past year’s pandemic. The hard liners don’t want a deal with the U.S. They never want to hear from the United States again. They think they can do just fine with Russia and China.

If Biden doesn’t do a deal with the current president, Hassan Rouhani, in short order, and if the hard liners get in, then there likely won’t be a deal to be had. Since the US and Iran are on a war footing and the US is actively blockading perfectly normal trade with Tehran, things could spiral out of control at any time.

The US has Iran in a pressure cooker, and Trump plugged up the safety valve. If things go on like this, there is going to be an explosion, and the United States is not in a position to go to war yet again.

The people who talk a maximalist game against Iran are Donald Trump, Ted Cruz, Josh Hawley, and Tom Cotton. We already saw at the Capitol two weeks ago where their policies take us.

At his own confirmation hearing on Thursday, Blinken said,

“When it comes to Iran, a couple of things. First, President-elect Biden is committed to the proposition that Iran will not acquire a nuclear weapon, and we share I know that goal across this committee. An Iran with a nuclear weapon or on the threshold of having one with the capacity to build one on short order would be an Iran that is even more dangerous than it already is when it comes to all of the other malicious activities that it is engaged in whether it is support for terrorism, whether it is fueling and feeding its proxies, whether it is destabilizing the region an Iran with a nuclear weapon or with the threshold capacity to build one is an Iran that would act potentially with even greater impunity than it already is. So I think we have an urgent responsibility to do whatever we can to prevent Iran from acquiring a record for getting–weapon, or getting close to the capacity to having the fissile material to break out on short notice.

In my judgment, the JCPOA, for whatever its limitations, was succeeding on its own terms in blocking Iran’s pathways to producing fissile material for a nuclear weapon on short order. It also featured, and a feature that continues the most intrusive inspections and monitoring regime in the history of arms control. The challenge we face now is that we pulled out of the agreement, Iran is now taking steps to undo that various constraints that were imposed on it by the agreement.

And so it has increased its stockpile of low enriched uranium. It is now enriching at a higher level. It is deploying centrifuges in ways that were prohibited under the agreement. The result is, based on public reporting, that breakout time, the time it would take Iran to produce enough fissile material for one weapon has gone from beyond a year as it was under the JCPOA to about three or four months, based at least on public reporting. And that potentially brings us right back to the crisis point that we were reaching before the deal was negotiated.

And so the president-elect believes that if Iran comes back into compliance, we would too. But we would use that as a platform with our allies and partners who would once again be on the same side with us to seek a longer and stronger agreement and also as you and the chairman have rightly pointed out, to capture these other issues, particularly with regard to missiles and Iran’s destabilizing activities. That would be the objective.

Having said that, I think we’re a long way from there. We would have to see, once the president-elect is in office, what steps Iran actually takes and is prepared to take. We would then have to evaluate whether they were actually making good. If they say they’re coming back into compliance with their obligations and then we take it from there.”

It is disappointing that Blinken said nothing about the economic vise in which Washington is crushing Iran’s economic life, or about the fact that the US screwed Iran over royally. Somebody in Washington should be willing to be honest about that.

As for Jake Sullivan, he told Farid Zakaria on being asked about Iran:

“SULLIVAN: Well, first, just to set the groundwork here, President-Elect Biden has said that if Iran comes back into compliance with its terms under the nuclear deal, that is to say it reduces its stockpile, it takes down some of its centrifuges and other measures so that its program is back in a box, then we would come back in. But that would become the basis for this follow-on negotiation.

So he doesn’t answer why Iran should bother to reenter talks with the US, which stabbed it in the back after it behaved in good faith. And why should the onus be on Iran? I’d say the US owes Iran a lifting of some of the economic blockade as a token of good faith.

At least Sullivan is talking about the ballistic missile issue as a matter for “follow-on” negotiations and not foregrounding it as a prerequisite for reestablishing the JCPOA.

Rob Malley is the Realist here, and my fingers are crossed that he gets the gig. America will be safer if he does. And this time, the Dems should pass the JCPOA as a formal treaty, which will make it more difficult to sabotage it if it can be reestablished.

“Will the US under Biden reenter the nuclear deal with Iran? | DW News”