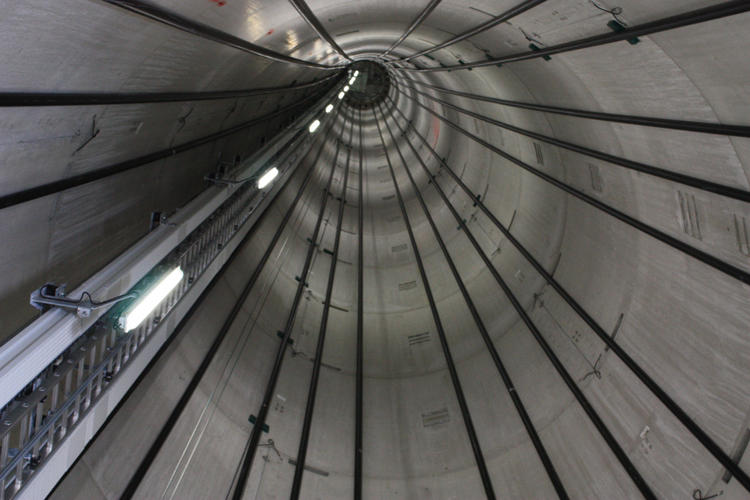 ( Clean Energy Wire ) – Onshore wind power – the cornerstone of Germany’s decarbonisation plans – has suffered from chronically low additional installations in the past years. The industry seems to have achieved a turnaround in 2020, connecting almost 50 percent more turbines to the grid than in the year before, but lobby groups warn that new construction still fails to match climate targets and rising green power demand. Making better use of existing locations through modernisation and a clear target on how much capacity is needed by 2030 are crucial steps to ensure that national and EU energy transition ambitions can be fulfilled, industry lobby groups cautioned . . .

The expansion of onshore wind power in Germany has seen a long-awaited boost in 2020 but still lags far behind the levels required to meet the country’s ambitious renewable power targets, according to latest wind power industry figures. Although expansion surged by 46 percent compared to the year before, the installation of 420 new turbines with 1.4 gigawatts (GW) capacity was still far too low given that onshore wind power is the most important technology Germany plans to use to bring its renewable power share to at least 65 percent by the end of the decade, up from around 45 percent last year, industry associations BWE and VDMA said.

Given that 203 old and smaller turbines were removed last year, net expansion stood at only 217 new installations, adding a capacity of 1.2 GW to Germany’s now total 55 GW onshore wind power stock. Matthias Zelinger of engineering association VDMA Power Systems said the lowest point in expansion levels seems to have been passed. “There’s a clear signal we are moving back up again. And this should be particularly noted during a year dominated by the coronavirus pandemic, which is testament to the industry’s resilience,” Zehlinger said. While Germany contributed only a small fraction to the 82 GW in global onshore wind growth, after being the biggest market for several years, its home market would at least be “back to the table” now, he added.

Onshore wind power provided about 20 percent of Germany’s gross power production in 2020, the biggest share of all power sources. The industry says it directly sustains about 100,000 jobs in the country and generates a turnover of 15 billion euros per year. Difficult licensing procedures due to red tape, environmental considerations and protests by local residents all have contributed to bring expansion to the lowest level in 20 years in 2019. This came as Germany’s parallel coal and nuclear phase-out, and plans to boost e-mobility and green hydrogen production, make abundant renewable power sources increasingly necessary.

The industry groups said a lack of permits and construction area continued to be among the main obstacles to new turbine construction, urging a better coordination between the federal government and the states to streamline and lift regulatory hurdles. About a third of auction volumes were undersubscribed in 2020, which still marked an improvement compared to the previous year, when half of all available capacity didn’t find investors. Uncertainty about their projects’ timely implementation due to sluggish licensing is seen as a main reason investors have shied away in the past years. 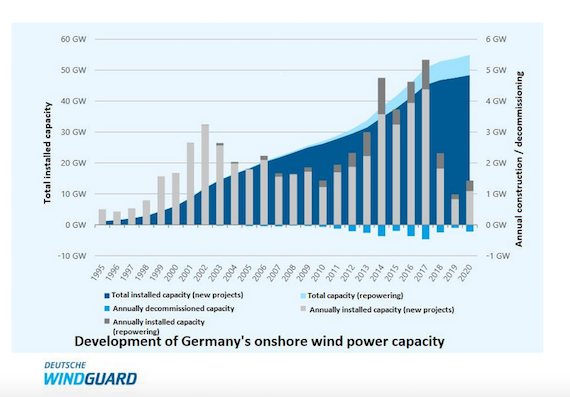 “Important to act even in election year”

In total, 3.3 GW received a permit in 2020, a strong gain compared to 1.9 GW in 2019. The lobby groups said the latest reform of Germany’s Renewable Energy Act (EEG) was a cause for optimism in the election year 2021, and stressed that a better repowering strategy is needed to prolong and enhance the use of existing wind farm locations.

Hermann Albers of the BWE, said the clear goal was to make sure auctioned volumes are all used. But rising deconstruction projections for older turbines, up to 14 GW capacity by 2025 according to industry estimates, meant that repowering measures had to be made a focus quickly. This would allow for the generation of higher yields at lower cost without using any new land area for construction, although new turbines are usually significantly bigger than the models they replace. “It’s important we act here even in an election year,” Albers warned. As more and more installations are set to go offline, net expansion figures would become ever more important, he added.

An analysis by the Climate Neutrality Foundation found that three major hurdles are prohibiting further and faster wind power expansion: the lack of land where wind turbines are allowed to be built, the unsolved conflict between climate action and species protection, and an overly complicated application procedure for project developers. To alleviate the first issue, the foundation suggests a change to Germany’s Federal Building Code that would obligate every municipality to give a minimum share of their land to wind power installations. With this – and by adjusting for the different municipalities’ locations and suitable space – Germany could use two percent of its total federal land area for onshore wind power, a share that would be required to reach the country’s need for renewable electricity if it wants to achieve climate neutrality, the foundation said. 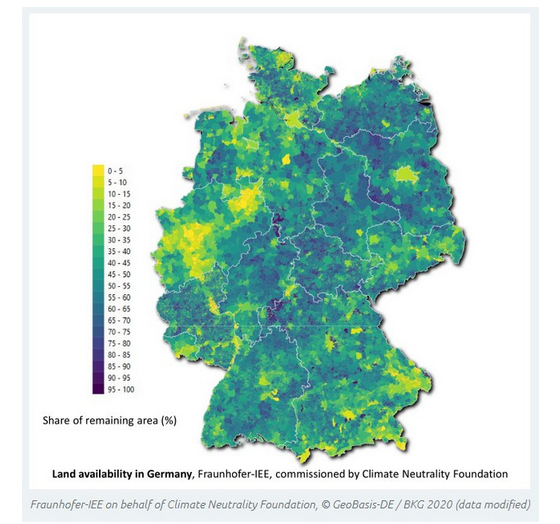 For 2021, the industry expects new installations will total up to 2.5 GW, but about 5 to 6 GW per year would be necessary to get on track towards the 2030 target and meet rising green power demand by companies seeking to decarbonise their business. The government has not yet come to a conclusion about what the projected total capacity at the end of the decade should be. Estimates range between 71 GW from the economy ministry to 95 GW by the environment ministry, with the latter more likely to account for the EU’s latest tightening of emissions reduction targets, the groups said. The Green Party’s Julia Verlinden said in an e-mailed statement that the still low expansion volume last year was a clear political failure which the EEG did not sufficiently address. She said her party would advocate for reaching at least 5 GW expansion annually.

NGO Environmental Action Germany (DUH) published a paper laying out what it sees as the “seven biggest problems” for renewables expansion under the reformed EEG. Among them are insufficient expansion plans over this decade, too little stimulus for citizens’ energy projects, and the fact that financial participation by local residents and communities is not mandatory.

“Our analysis shows: glaring errors in the EEG are responsible for the sluggish expansion,” said DUH managing director Sascha Müller-Kraenner. If the Renewable Energy Act were a house, it would be in danger of collapsing due to so many technical deficiencies.”

Featured Photo: Inside of a wind turbine tower in Germany. Photo: CLEW/Wehrmann.