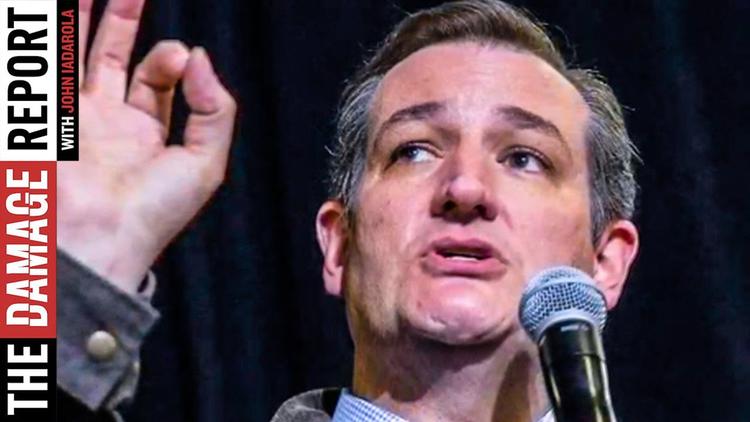 Like a political remake of Night of the Living Dead, the Republican Party — put to death by the Lame Duck’s poisonous presidency — has reanimated as the Zombie Party. This hollowed out duplicate looks the same, but has been implanted with the traitorous delusions of the demented ex-President. Denying the basic assumption of electoral democracy that the minority accepts the legitimacy of the majority winner, most Republicans supported or cowered quietly as the loser president engaged in a buffoonish but criminal attempt to overthrow the will of the people and sabotage the transfer of power.

This is the culmination of the past four years during which the Zombie Party mutely enabled a contaminated presidency infected with personal corruption, contempt for the Constitution, and malicious neglect of the pandemic that has now killed over 350,000 Americans. Even now, the brain-dead Party has nothing to say about the Lame Duck’s pardon of the Blackwater child-killers, his dereliction of duty in the face of a massive Russian hack that invaded over 250 federal agencies, and his indifference to the stagnation of “Operation Warp Speed.”

As the last gasp of the Lame Duck’s administration thankfully expires on January 6 when a joint session of Congress will vote to accept the electoral college results, more than a dozen zombified Republican senators — led by cadaverous Ted Cruz — will join the sedition caucus along with at least 140 Republican House members in voting to reject Joe Biden’s victory. Bloodless puppet Vice-President Mike Pence welcomed their rejection and, with them, descended into Conspiracy Land.

These anti-democratic Republicans seek the installation of the 2020 election loser as the winner. Defying the results of a free and fair election to indulge the Lame Duck’s futile attempts to retain power, they cite evidence-free, unsubstantiated allegations of voter fraud. Their aim is not, as they profess, to ensure election integrity, but rather to cater to the traitorous whims of an autocratic president and burnish their credentials with the demented MAGA base as loyal zombies for future elections.

A new GOP litmus test has been created by the Lame Duck — true Republicans must deny reality and assert that the election was stolen as result of some non-existent fraud. This is now a central dogma of the Zombie Party. Even a loyal stooge like Georgia Governor Brian Kemp was decapitated when he refused to intervene in the state’s presidential election after three re-counts confirmed Biden’s win. The Lame Duck demanded that Kemp resign and tweeted, “He is an obstructionist who refuses to admit that we won Georgia, BIG! Also won the other Swing States.” It would be no surprise if the Lame Duck staged a counter-inauguration in Mar-a-Lago and insisted that Republicans attend.

The has-been loser and his fellow Republican seditionists see January 6 as the last stand to contest election results. This is incredibly destructive, humiliating to the country, and pointless since the Democratic majority in the House will vote to confirm Biden’s victory. Nevertheless, in voting to reject Biden’s election, the Republicans align themselves with the despotic Lame Duck’s looney side-kick — the face-melted, failed Borat-actor Rudy Guiliani — while empowering the anti-mask MAGA fanatics, neo-fascist Proud Boys, and the crackpot Qanon cult. They also legitimize these dead-enders’ extravagant and bizarre “election-theft” mythology that is populated with thousands of dead people voting, international communist plots, hacked Dominion voting machines, massive illegal ballot dumps, mail-in voter fraud, urban voting irregularities, Hugo Chavez, Angels from Africa, and the Kraken.

The result will be a shameless show of support by craven Congressional Republicans for erasing the votes of millions of Americans — and, perhaps, mayhem in the streets, incited by the ex-president. “Big protest in D.C. on January 6th. Be there, will be wild!” he tweeted earlier this month in an appeal to his robotic followers. Hopefully, the damage from the chaos that the Lame Duck is urging doesn’t extend to human lives. The anti-democratic move by Congressional Zombies will force a contentious and embarrassing floor debate that Senate Republican leaders had hoped to avoid. Even if temporarily rational Republicans vote down the objection to Biden’s win, they are all responsible for turning their Party into an authoritarian movement.

Prior to the election of the ex-reality star, the GOP’s aversion to democracy was clear: it lost the popular vote in seven of the past eight presidential elections — a streak of futility unmatched in U.S. history. Democracy was not working for the Republican Party. The solution to its chronic inability to win a majority of voters in presidential elections was to embrace minority rule and exploit defects in the American system: the electoral college, voter suppression, the enormous imbalance in Senate representation that gives disproportionate power to red states, the gerrymandering of congressional districts, and the politicization of the federal courts — these methods became critical requirements for imposing the will of the minority on the majority.

“The Republican Party is on a continuum toward the kind of democratic erosion visible in other countries, including Turkey under Recep Erdoğan, Hungary under Viktor Orbán, or, in the most extreme example, Russia under Vladimir Putin,” says Susan Stokes, a political science professor and the director of the Chicago Center on Democracy at the University of Chicago. “In those nations, a party that wins office through a democratic election then seeks to use state power to tilt or completely undermine future elections.”

As a candidate in 2015, the Lame Duck spewed the truth that, as a force capable of winning presidential elections, the Republican Party was dead. In March 2016, he said, on his favorite propaganda show Fox &amp; Friends, that Democrats want “levels of voting that, if you ever agreed to it, you’d never have a Republican elected in this country again.” In this warped view of democracy, the Demagogue decides what “levels of voting” he agrees to allow so that Republicans can win. His ascent to the presidency galvanized the Republican revolt against democracy and helped institutionalize it. The Lame Duck’scurrentscheme to annihilate American democracy should be seen as part of the process by which authoritarianism is normalized.

The Republican automatons — parroting the Lame Duck — are an anti-democratic force that believe Biden’s win is a fraud because the Democratic party is not a legitimate political institution so its voters don’t count. This is why the authoritarian countermeasures emerging from the MAGA fever swamps— Supreme Court decree, martial law, the seizure of voting machines, and the replacement of state electors — are so openly discussed.

When they say the 2020 election was stolen, Republican zombies are expressing their view that the nation belongs to them, whether or not they actually constitute a majority, because they are the only true Americans. This fundamental Republican belief — fueled by the Birther-in-Chief — ties the election conspiracy theory to birtherism:neither Barack Obama nor the coalition that elected him was considered politically legitimate. Obama’s “illegitimacy” — according to the conspiracy theory — resulted from his designation as African, Muslim, and foreigner. It’s no accident that the Lame Duck’s phony election fraud claims have focused almost entirely on jurisdictions with high Black populations.

“Detroit and Philadelphia—known as two of the most corrupt political places anywhere in our country, easily — cannot be responsible for engineering the outcome of a presidential race,” said the Lame Duck on November 5. His failed legal challenges targeted cities with large Black populations. Black votes are considered illegitimate unless cast for Republicans, the party of true Americans. By this preposterous logic, tossing out Black votes for Biden is not anti-democratic, because they should not have counted anyway.

During the 2020 campaign, the incumbent president failed to even pretend to express a future vision open to citizen debate. Policy arguments are the relics of a democratic conception that the Lame Duck killed — the notion that an election is a contest for the support of a majority of voters. Such democratic arguments implicitly include the possibility that there is another, equally valid choice. That is exactly what the Lame Duck and the Zombie Republican Party refuse to accept. With no policy agenda for a second term, the Zombie GOP merely cloned its platform from 2016, without even bothering to delete its multiple attacks on “the current president.” Their policy was a promise to follow the mindless impulses and dictates of Dear Leader. When The Lame Duck spoke on election night about “a fraud on the American public,” he meant that the “public” consists only of his voters.

The panicked Lame Duck wants to legitimize the illegitimate, avoid accountability for his crimes, and create a permanent class of aggrieved citizens who will do and think whatever he says while continuing to give him money. Increasingly in the thrall of conspiracy theorists and right-wing extremists, the Zombie GOP wants to force the re-installation of this corrupt, toxic, dysfunctional administration. The incoherence and ineptitude of their attempt does not change the fact of its being an attempted coup. A catastrophe that was averted by the ham-fisted efforts of its would-be perpetrator invites a real catastrophe brought on by someone more competent and cunning. The malignant ex-President has established a playbook for stealing elections by mobilizing executive, judicial, and legislative power to support the attempt.

Fortunately, enough local Republican officials in 2020 recognized that their civic obligations outweighed their partisan affiliation. On a just-released phone call with Georgia officials, the delusional Lame Duck says, “I just want you to find 11,780 votes because we won the state.” Flagrantly abusing his power, he alternately reviles Republican Secretary of State Brad Raffensperger, begs him to act, flatters him, and even threatens him with vague criminal consequences if he refuses to capitulate. Throughout the non-perfect call, Raffensperger rejects the Lame Duck’s assertions, explaining that the president is relying on debunked conspiracy theories. Still, the next time a Republican president or senator seeks to stay in power after losing an election, there may not be enough civic-minded Republicans who place duty above party to prevent the power grab.

The infectious presidency of the Lame Duck has not been completely eradicated. Joe Biden hoped to arrive in the Oval Office — after it’s been fumigated — as a healer, intending to cure the country of division, suspicion, rage, and hate. However, in electoral terms, GOP constituents were not repulsed by the ex-president’s dumpster fire. They heard the Lame Duck say, repeatedly, that he would not accept losing the election. They witnessed the past few months of reckless disdain for democracy. They embraced his authoritarianism with enthusiasm. The assault on democracy now has a genuine, highly engaged, movement behind it — animated by racism, resentment, and revenge.

The Lame Duck may never stop menacing the country until he becomes disabled, deceased, or jailed. With the removal of presidential immunity, the latter possibility must be vigorously explored. “Few people have evaded consequences more cunningly,” writes Jane Mayer in the New Yorker,

That run of good luck may well end, perhaps brutally.”

Zombie Republicanism is a threat to the body politic. The treatment will require radical interventions, including the transformation or dissolution of the Republican Party, a purge of zombies from the government, and an investigation of the ex-president, his family, and his top cronies as a criminal enterprise. While the urge to move forward is understandable and dredging up four years of horror is painful, the Biden administration must take firm and decisive action against the illegalities and shattered democratic norms of the the Lame Duck’s hideous tenure.