Ann Arbor (Informed Comment) – There are no races. Human beings are all mixed up, and genomic history demonstrates this principle better than any other approach. So much of Middle Eastern politics depends on a kind of “sleeping beauty” nationalism (in Ernest Gellner’s phrase) in which it is alleged that there was an ancient race that fell asleep or became degraded but is now reviving as a modern nation-state. It is as much a fairy tale as the story of Sleeping Beauty herself.

A new genomic history published in Cell of what is now Lebanon, Israel, Palestine and Jordan (“the southern Levant”) has shed loads of light on the Canaanite peoples from which the Israelites and the Phoenicians stemmed.

This is a map of where the human remains came from for the study, which still yielded DNA thousands of years later:

The authors find that the multi-ethnic Canaanites originated in significant part from the Zagros Mountains in the northeast of what today is Iran.

The Chalcolithic period in the Zagros mountain range stretched from 5500 BC to 3300 BC and is marked by distinctive ceramics. Some of those people trekked down to the southern Levant and helped found the Land of Canaan of which ancient neighbors spoke and to which the Hebrew Bible often refers. 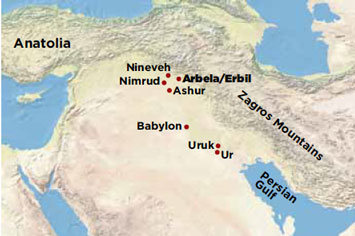 The Canaanites existed as multiple city-states from 3800 BC. Along the coast, the small kingdoms were oriented to Mediterranean trade. The principalities to the east in the hinterland practiced distinctive forms of agriculture, and there were pastoralists (who wandered arid, marginal land in search of pasturage for their sheep, goats and other animals.) They spoke or came to speak a Semitic language. Phoenician and Hebrew are essentially dialects of Canaanite, and Phoenician and Hebrew culture are developments out of Canaanite culture.

People came down from the Zagros either directly or through the Caucasus and what is now eastern Turkey, or both. The authors write:

“We . . . reasoned that the Chalcolithic Zagros component might have arrived into the Southern Levant through the Caucasus (and even more proximately the northeastern areas of the ancient Near East, although we have no ancient DNA sampling from this region). This movement might not have been limitedto a short pulse, and instead could have involved multiple waves throughout the Bronze Age.”

As for when people came from the Zagros down into the Levant, they suggest

“that gene flow into the region started before ca. 2400 BCE. This is consistent with the hypothesis that people of Kura-Araxes archaeological complex of the 3rd millennium BCE might have affected the Southern Levant not only culturally, but also through some degree of movement of people.Our data also imply an increase in the proportion of Zagros-related ancestry after the Intermediate Bronze Age…”

The northeast Zagros was dominated in the 2000s BC by the Hurrian people, who had a distinctive language that may not be related to any of the known major language families, that is, it may be what the linguists call an “isolate.” The Hurrian civilization petered out around 1000 BC.

The Canaanites were likely not one ethnic group but many, though they may have gradually adopted a common language. They were ruled by many different kingdoms, including in the second millennium BC the Pharaonic Egyptians. Akhenaten, the Pharaoh who tried to make a semi-monotheistic move toward worshiping the sun god Aten, ruled the Canaanites. Owen Jarus at LiveScience explains that the Amarna Letters of the 1300s BC

“show that Egypt held considerable power over these Canaanite kings. One letter written by a king of Babylon named “Burra-Buriyas” complains about the killing of Babylonian merchants in Canaan and reminds Egypt’s pharaoh that “the land of Canaan is your land and its kings are your servants.” (Translation from Brandon Benz’s book “The Land Before the Kingdom of Israel”)

Egyptian texts also show that Egypt’s pharaohs sent military expeditions into Canaan. A stele erected by a pharaoh named Merneptah (reign ca. 1213-1203 B.C.) claimed that “Canaan has been plundered into every sort of woe.” The same stele also claims that Merneptah “laid waste” to “Israel.” “

“Ludovic Orlando, a molecular anthropologist and geogenetics researcher affiliated with the University of Toulouse and the University of Copenhagen, emphasized that “populations, thus ancestries, are not static through space and time, and no modern groups can be depicted as descending from unique ancestors who once inhabited a single region.”

There are no races.