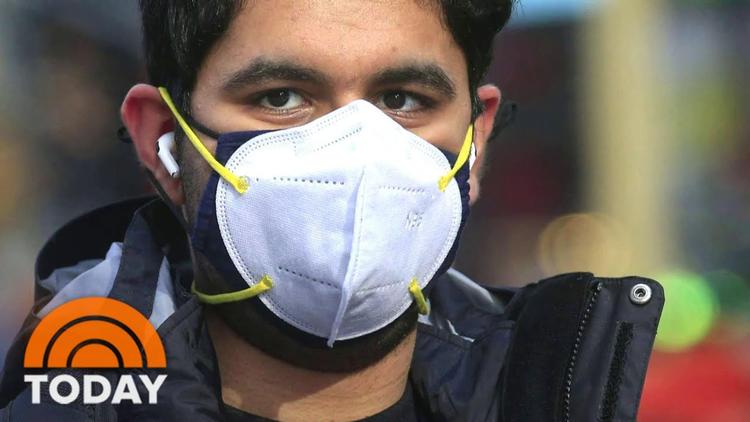 Ann Arbor (Informed Comment) – One of Trump’s biggest crimes for which he is unlikely ever to be held responsible was just discouraging mask-wearing in the midst of a pandemic of a respiratory disease. He, of course, contracted the disease himself, as did most of his prominent staffers, mainly because they refused to socially distance or mask up. There is no reason why Bible-thumping Republicans should have rejected mask-wearing, but Trump made it a culture wars meme.

A scientific poll of 6,000 Americans over the past year undertaken by the University of Southern California found that mask use by whites is substantially lower than in other populations, and it seems to me likely that it is a Trump/ GOP effect. USC’s news service writes,

“Two-thirds of Americans reported being in close contact (within less than 6 feet) with people outside their household in early December, but only about half of them said they mostly or always wore a mask while doing so.

Despite the advantages of whites in wealth and education, they are still behaving in a less informed and more dangerous way than other ethnic groups. As for the much-maligned Los Angeles, it has one of the highest rates of mask-wearing in the country.

Now that we don’t have a clown-in-chief discouraging people from wearing masks when they go out of their homes or meet with unrelated people, maybe some of the irrational opposition to basic hygiene will fall away. President Biden sets an example himself and has called for mask-wearing. His executive action requires masks on interstate transportation, and in federal facilities. Federal employees are some ten percent of the workforce, and hundreds of thousands of Americans fly each day, these policies are affecting millions and will save lives.

It is going to take a while to vaccinate enough Americans to stop the transmission of the novel coronavirus. The US is now vaccinating 1.3 million people a day. But at the moment they will need two shots, and we are unlikely to get to 70% inoculated before next fall. The US health delivery system is a hodgepodge and highly decentralized, and reaching 240 million Americans with shots is an enormous logistical challenge.

Worse, new variants of the virus are being rapidly transmitted in the US, and the existing vaccines may be less effective with some of them. Oxford’s AstraZeneca vaccine, not being used in the US, is only 10% effective against the South Africa strain.

Between the delay of many months in reaching herd immunity on the old vaccine and the unpleasant prospect of new strains against which the existing vaccinations may not be as effective, it is crazy for Americans to put all their hopes in immunization during the remainder of 2021.

We could, however, stop the virus, including new variants, in its tracks and save literally hundreds of thousands of lives with one simple step – avoiding as much as possible mingling with people outside our households and, when we do, wearing a mask.

Putting on two well-fitting cloth masks with a high thread count has been found to be 70% effective against transmission, which is as good as some vaccines. (See the clip below.)

High rates of mask-wearing account for the much more effective East Asian response to the coronavirus. Taiwan had very few deaths and most people mostly masked up. In Hong Kong mask-wearing was 98%. In China it was 82%. These are all much higher rates than for any group in the United States, and it shows. The US in contrast has had a much more drawn out experience of the pandemic (it was over last summer in East Asia, without a vaccine), with bad economic results and high death rates.

The old “Lone Ranger” television Western featured a masked hero. People would ask after his heroics, “who was that masked man?” The answer should be, all of us. That’s how to be a hero nowadays, too.