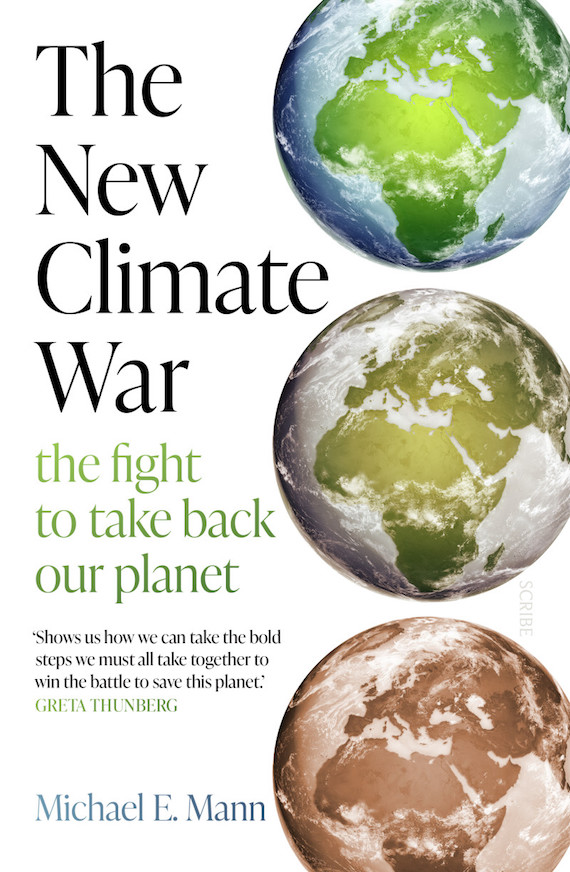 Ann Arbor (Informed Comment) – I am so pleased to present to our readers an interview with one of the world’s foremost climate scientists, Michael E. Mann of Penn State. I have followed him for a decade and a half and have learned tons from his informed, clear and absolutely crucial writing. In his journal articles, Mann does high-powered mathematics and science at a level that I can’t always follow. In scientific best practice, however, he comes back and clearly explains the significance of his findings for those of us in the general public.

Mann may be the closest thing we have today to a Carl Sagan.

Mann was targeted for a smear campaign by Big Oil interests and high officials of the Republican Party for his climate research, especially his famed “hockey stick” graph that demonstrated that global heating is spiking in dangerous ways. A man of enormous courage and steadfastness, he has never allowed the scurrilous attacks on him to cause him to waver in the slightest.

In his most recent book,

The New Climate War: The Fight to Take Back our Planet [click to buy], he turns the tables on his persecutors by laying bare for all to see the tissue of lies, misrepresentations and propaganda techniques used by the big oil corporations and governments like Russia and Saudi Arabia to suppress action to halt global heating and to address the climate emergency.

This book is essential reading for anyone who wants to be an informed environmentalist and who wants to understand the best way forward for climate activists. The book not only warns us against “doomism” (the false idea that it is too late for us to address the climate emergency) and “inactivism” (the various ways corporations plot to discourage us from taking a stand), but along the way it explains the true nature of the climate emergency.

Well, since I have Professor Mann here, let me turn the floor over to him.

Juan Cole:
1. Your new book highlights the danger of “doomism,” the hysterical allegations that the fight against climate change is hopeless and that inescapable global catastrophes await us no matter what we do. I think doomism is reinforced because most people don’t understand the notion of a climate budget such that the oceans will gradually absorb the billions of tons of CO2 humanity has pumped into the atmosphere, and earth will return to the pre-1750 normal if we just stop emitting CO2.

Could you just say a few words about the mechanism whereby the high carbon dioxide levels in the atmosphere (~415 ppm) will go back down if humans go green? What are the oceans’ limits in this regard?

Thanks for asking about this. It is indeed one of the most misunderstood and yet absolutely critical aspects about the science behind carbon emissions and warming. We can think about the situation as a sink with a faucet (human carbon pollution) and a drain (the oceans and plants which take drawdown carbon from the atmosphere). if the drain is open but the faucet is turned up high enough, the level of the water will continue to rise. That’s the situation we’re in right now with rising CO2 concentrations.

But if you turn off the faucet, and the drain remains open, the water level will start coming down. That’s what happens if we suddenly stop producing carbon pollution from fossil fuel burning (and agriculture and other carbon-generating activities). But while CO2 levels start to come down, we also have the “committed warming” effect where the oceans slowly warm up in response to carbon pollution that is already in the atmosphere. These two effects balance and surface temperatures remain roughly constant.

So if we stop burning fossil fuels, global surface temperatures will stabilize within a few years and stop increasing. That’s the good news. It means that there is an immediate and direct consequence to our efforts to reduce carbon pollution now. There’s also some bad news though. Some effects, like the destabilization of ice sheets and resulting sea level rise, and “ocean acidification” may still continue to progress for decades. So there is a real “procrastination penalty”.

2. You argue in your book that Big Oil is attempting to escape responsibility for its climate crimes by guilt-tripping ordinary people. They ask why climate activists fly, or drive cars. You recall the similar ploy of polluting industries back in the 1970s with the famous advertisement of the weeping American Indian, implying that people could fix pollution by just picking up trash. You argue that while individual activism is a good thing, the problem is so big that only government-led infrastructure programs would have a scale sufficient to meet the problem.

Do you think the infrastructural changes proposed so far by the Biden administration are a game-changer? How can ordinary people continue to help and stay committed, if government takes the lead here?

Joe Biden ushers in a new era of global cooperation, allowing us to repair much of the damage that was done to our reputation on the world stage by Trump over the past 4 years on the international front, while once again advancing policy action on the domestic front. But make no mistake, we still have a monumental challenge ahead.

The sobering reality is that even if every country meets their commitments under Paris (and many, including the U.S. and EU are currently falling at least a bit short), that gets us less than half way to where we need to be, i.e. on a path to limiting warming below an increase of 2° Celsius [3.6° F. -ed.] (let alone the more stringent 1.5C many are now calling for).

So Paris is a good starting point, but we need to go well beyond Paris now to achieve the reductions that are necessary. And we do indeed still face challenges and pushback from the fossil fuel industry, including the insidious tactics I describe in my book wherein fossil fuel lobbyists, advocates and allies in the conservative media, while moving away from outright denial—because it just isn’t credible anymore—have tried to distract, deflect, divide, and sow doomism in their effort to suppress support for climate action.

We must recognize those tactics and fight back, because we’re so close now to meaningful climate action we can taste it. Only these obstacles lie in our path. That’s the main overall point of my book.

Biden has put forward a bold climate plan with ambitious targets for reducing carbon emissions and support for both regulatory and market-driven policy measures. But executive actions alone won’t be adequate.

We need climate legislation. With a 50/50 split Senate, there is an opportunity for meaningful climate legislation but it will require some degree of compromise. We probably won’t see an expansive Green New Deal pass the Senate. But we might see significant action, including market incentives to accelerate the clean energy transition, that will complement the climate efforts by the administration.

It’s critical that people continue to put pressure on their congressional representatives to support climate legislation at the national level while also keeping the pressure on state and local representatives. We will need to see action at every level of government, from the federal level all the way down to the local level, if we are to meaningfully address the climate crisis.

3. You argue that a carbon price is really important in achieving our goals in the United States. With the exception of the pandemic hiccup, which temporarily reduced emissions, the U.S. typically puts out on the order of 5.1 billion metric tons of carbon dioxide a year, while the whole world puts out 33.1 billion metric tons. That is, the U.S. emits 15% of global CO2 but has only 4% of the world population. In contrast, some populous global south countries have almost no carbon footprint. It is clear that the U.S. has a steep hill to climb in getting to net zero carbon emissions, and that a carbon price would concentrate the minds of corporate CEOs on this problem. But Naomi Klein and others on the Left have argued that a carbon price is regressive. It will make it more expensive for working class commuters to get to work if you tack a tax on to their gasoline. The Yellow Vest revolt in France 2018-19 had a carbon tax as one of its issues. How can a carbon tax be both effective and progressive?

Thanks again for a great question Juan. This really gets at the heart of the matter. My thesis in The New Climate War is that bad actors have done their best to poison the well of support for carbon pricing with progressives. Russia is chief among them, as they see still-buried fossil fuels as their greatest asset and Putin has even speculated, wrongly, that climate change would be good for them.

With conservatives already largely opposed to it, getting progressives to stand against carbon pricing is a sweet victory for climate inactivists. We know that Russia played a role in instigating the Yellow Vest revolt, since this is ideal framing for them — i.e. the idea that carbon pricing is somehow inherently regressive.

As I discuss in the book, just the opposite has been true where carbon pricing has been successfully implemented, for instance in Canada, and for a few years in Australia (before the conservative government got rid of it with the help of a massive disinformation campaign by the Murdoch media). In both cases, the revenue has been returned to the people on a progressive basis, and low-income individuals and families have actually benefited economically. So it all depends on how carbon pricing is implemented.

But to be clear, carbon pricing is just one of the tools in our toolbox. It’s an important one, but we’ll need all of them, as I explain in the book, including other demand-side measures (e.g. subsidies for renewables) and supply-side measures (blocking new pipelines, not approving new fossil fuel infrastructure, removing subsidies for fossil fuels, etc). The Biden administration is doing what it can in each of these areas, but as I stated above, that must ultimately be complemented by congressional climate legislation.

I was one of a number of colleagues who had the honor of hosting Michael in Ann Arbor for the Academic Freedom Lecture Fund in 2017.

Here is the proof: 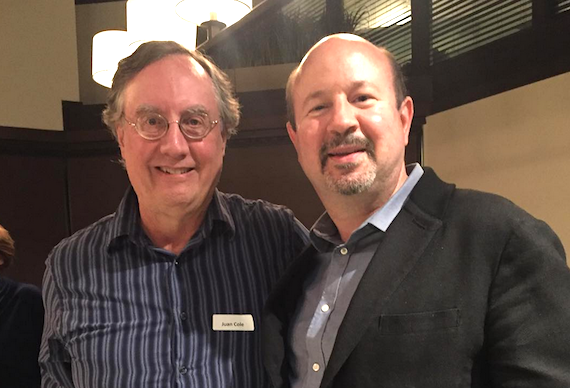