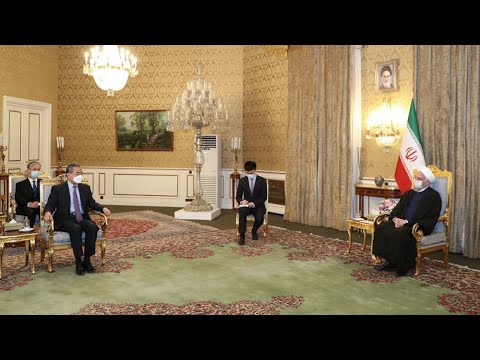 Ann Arbor (Informed Comment) – On Saturday, IRNA reports, Iran and China signed a 25-year cooperation agreement. The signatures were affixed in Tehran by Iranian Foreign Minister Mohammad Javad Zarif and the Chinese Foreign Minister Wang Yi at a ceremony on the 50th anniversary of the establishment of modern diplomatic relations between Iran and China.

The deal is a slap in the face of the United States, which placed a financial and economic blockade on Iran when Washington abruptly breached the 2015 nuclear deal in May, 2018. the Trump administration threatened third-party sanctions in the billions of dollars on countries that so much as traded with Iran. The Biden administration has kept this invisible blockade in place, though President Biden has at least said he intends to restore the 2015 deal.

It may be that China expects Iran to reenter the world economy during the Biden administration, and has put down a marker on its investment in Iranian resources.

In fact, it occurs to me that China may well pressure both Tehran and Washington to come back into compliance with the 2015 Joint Plan of Collective Action, since that would make this Iran deal much easier for Beijing to implement. Foreign Minister Wang Yi hinted as much in remarks on Saturday. President Biden may want to open a Chinese back channel to Iran.

China’s entry into Iran in such a big way is the most consequential change in the geopolitics of the Middle East since the fall of the Berlin Wall and the collapse of the Soviet Union, which made the US the sole Middle East superpower (this was visible in the 1991 Gulf War and the 2003 unilateral US war on Iraq). Moscow’s return as a patron for the Baath regime in Syria is small potatoes in comparison.

I don’t mean this pejoratively, but as someone who just published a book that is in part about the Mongol period in Iran, it strikes me that this deal will create the most extensive relations between east Asia and Iran since the Mongol empire, which ruled both Iran and China in the 1200s.

The treaty is the longest bilateral agreement that the Islamic Republic of Iran has concluded, and it covers economic, cultural and other relationships. On China’s side, it locks in an assured source of petroleum and natural gas for the next quarter-century, as China moves toward its 2060 goal of net carbon zero. It may be that China hopes initially to replace its coal plants, which now generate 60% of its energy, with Iranian natural gas, which would be half as carbon intensive, as a first step toward moving entirely to green energy.

A joint communique said, “We believe that this document will further promote the continuous and comprehensive development of the strategic partnership between Iran and China and will create prosperity for the two nations.”

According to Al Jazeera, Said Khatibzadeh, the foreign ministry spokesman, said that the 25-year agreement would concentrate on economics and politics, among other dimensions of the two countries’ relationship. It will, he said, bring Iran into China’s One Belt, One Road pan-Eurasian infrastructure plan.

The two countries will invest in one another’s ports, energy facilities, transportation networks, manufacturing and services.

Earlier estimates were that the deal would be worth an annual $16 billion in investments and trade for each year of the agreement, for a total of $400 billion.

“China plans to step in with large development projects of Iranian oil and gas , according to Global Construction Review. Iran will buy all its equipment in this sector from China, giving Beijing a monopoly. In addition, China will build new pipelines and roads, putting $120 bn. into transportation networks. One of the pipelines will take natural gas to Turkey, which is also defying the Trump severe sanctions on Iran. Beijing’s plan for Iran is similar to the Chinese Pakistan Economic Corridor, except it is ten times as ambitious (CPEC is a $50 bn. or so commitment).”

Outgoing Iranian President Hassan Rouhani complained that American military adventurism in the region had destabilized it.

He said that Iran and China are cooperating to keep the 2015 nuclear agreement in place, and urged Europe to join in that endeavor. Iran gave up 80% of its civilian nuclear enrichment program in return for an end to economic sanctions. Because the US Congress, dominated by the Republican Party until this year, refused to lift US sanctions and because of the Treasury Department’s threat of third-party sanctions, Iran received no economic benefit for radically scaling back its program, and indeed, was hit with harder sanctions than ever by Trump.

Iran and China have been doing an estimated $20 billion a year in trade in recent years. The amount was larger earlier in the teens before the steep fall in the price of oil.