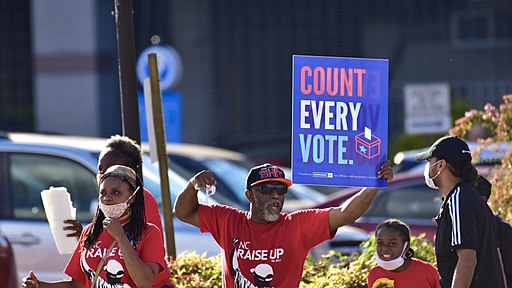 It’s not a crowd of rioters, like on January 6 — it’s a group of legalistic autocrats like Ted Cruz and Mitch McConnell.

( Otherwords.org ) – In February, Texas Senator Ted Cruz ran off to a luxury resort in sunny Cancún, Mexico during the deep freeze that devastated millions of his constituents.

But I wasn’t mad that Ted fled. What upset me was that the government let him back into our country.

Cruz is, after all, the self-aggrandizing ego that arrogantly and illegally tried to cancel the ballots of millions of voters in last year’s presidential election. Then he helped dupe a crowd of Trumpeteers into storming our nation’s Capitol in a violent and silly attempt to seize control of our government by force.

Now the wannabe autocrat is demanding that the Supreme Court suppress the people’s democratic will.

He’s teamed up with the sour old corporate plutocrat, Mitch McConnell, to back a ploy by Arizona Republicans to disenfranchise Latino, Indigenous, and Black voters.

Cruz and McConnell are demanding that the Court’s partisan Republican justices gut America’s landmark Voting Rights Act, which prohibits states from altering election rules to give minority voters less opportunity to participate in the political process than Anglos.

Arizona’s Republican lawmakers had passed a nasty provision declaring that any ballot cast in the wrong precinct, no matter how valid, must be tossed in the trash, rather than merely allocating it to the voter’s correct precinct. This almost entirely affects people of color, with whom GOP election officials play nefarious games — frequently moving their voting places, often at the last minute with little notice.

Instead of pushing their party to try winning these peoples’ votes, Ted and Mitch simply want to eliminate them. They’ve asked the Court to nullify the bothersome Voting Rights Act so their party can freely lock out minority voters.

The greatest threat to our democracy is not a violent mob, but a legalistic coup by thugs like Ted Cruz.

This file is licensed under the Creative Commons Attribution 2.0 Generic license.