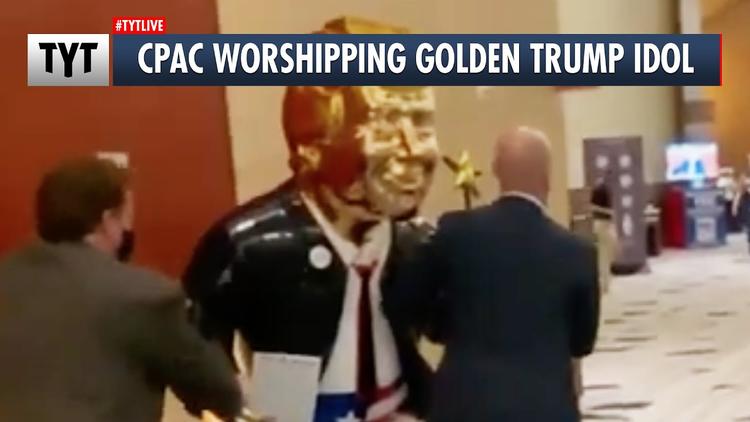 Ann Arbor (Informed Comment) – That someone at the conservative political convention, CPAC, thought it a good idea to put up a gilded statue of the odious Trump says it all. Today’s conservatives are literally worshiping a gold calf, for all the world like straying children of Israel who lapsed from their devotion to God.

Contemporary conservatism has fallen into the seven deadly sins of pride, greed, wrath, envy, lust, gluttony, and sloth. This listing of faults originated with Evagrius the Solitary, a fourth-century monk from what is now Turkey. His original list had eight sins, but both pride and vainglory were on it, and subsequent authors collapsed them into seven.

I have never found conservatism an interesting ideology, and it seems to me patently false. Its exponents seem to believe that the rich are rich because they are more capable than others and the poor are poor because they are lazy. They decry the role of government in the economy but no one manipulates the government for the benefit of their social class (typically the owners of businesses) more than they do. They believe that there are social hierarchies and that these are a good thing. I once heard William Buckley on the radio insisting that the lives of the blind are obviously less full than the lives of the sighted. The crass and embarrassingly glib argument seems to me to sum up the conservative obsession with some people being innately better than others.

Even Buckley, however, would be embarrassed by today’s conservatives, who have devolved into glassy-eyed cultists. They dance around denying reality, imputing the Capitol insurrection to “antifa” in contrast to FBI findings and the evidence of our own eyes. They insisted Joe Biden isn’t really the president. Making sure that the rich are not regulated or taxed in the interests of the public good, the old conservative objective personified by Mitch McConnell, is tame stuff by comparison.

Conservatism has become so prideful as to be narcissistic. Refusing to acknowledge that you lost an election fair and square is pride. This sin of pride led dozens of sitting congressmen to vote against certifying Joe Biden’s triumph. They were too full of pride to accept that they had been whupped. In fact, conservatism today cannot accept any criticism, any defeat on any issue at all. If they appear to lose, it is because of a conspiracy. Their increasing loss of touch with reality is driven by pride. They are constructing a fantasyland in which they always prove victorious. Their pride in being white Christians is also to the point of sin. They seem to have lost sight of that charity and humility business, and seem not to realize that the founders of Christianity were not “white” but brown Palestinian Jews.

The notion that people are rich because they are better than others also displays the sin of pride. Obviously, the rich are often capable people. Economist and former labor secretary Robert Reich points out, however, that most billionaires get to be that way through 5 techniques.

1. Exploit a monopoly
2. Insider trading
3. Buy off politicians
4. Extort investors into giving you a golden parachute
5. Inherit a sh*t-load of money

All five of these ways to get super-rich exhibit the sin of greed. Monopoly practices harm the public weal, and entrepreneurs who wield them are taking advantage of people while benefiting enormously themselves. Likewise, insider trading (which even some in Congress engage in) is a form of theft. Corrupting the political system the way Koch does, buying off politicians to lower his taxes, is also nothing but greedy. Greed is the desire to have and hoard a lot of something (in this case, money). The greedy don’t want to consume their gains, necessarily. Nor could they. Having a billion dollars is after all notional. You don’t actually have it. Most of it is directed by other people. The rich can only own so many appliances or eat so many meals. Most of their money is socked away in investments and does them no particular good as persons.

The Trumpist form of contemporary conservatism is all about wrath. Trump wants to punish those Republicans who voted to impeach him. He didn’t get animated at CPAC until he got to his enemies list. Conservatives are angry. Life isn’t fair to them (even though they are the richest and most privileged people on earth). They are angry at minorities for asking for equality under the law and eroding their white privilege. They are angry about polite requests that they help pay for the government services and infrastructure that allow their businesses to turn a profit.

Today’s conservatives are envious of the Civil Rights Movement and the New Left. These movements made it indelicate to express racist ideas publicly. They robbed conservatism of the racial epithets whereby they had kept some populations voiceless. That is why they keep crying reverse racism against whites. They have minority envy. They wish they could have the validation that comes with being oppressed. Hence, they imply, Jewish Americans are making a war on Christmas to the point where you have to say “Happy Holidays” instead of Merry Christmas. Christianity, the religion of 85% of the population, is being discriminated against. They don’t understand that activism on the part of the Establishment is not like activism on the part of the truly oppressed.

Conservatives don’t have a monopoly on lust. But the Trumpian brand that has taken over is ostentatious in its claims on white male privilege to sexually harass women. Trump himself is a notorious grabber of pudenda and a philanderer against whom many claims of sexual abuse have been filed. His brand of conservatism entails push-back against women’s desires to be treated like human beings instead of pleasurable objects. It seems clear from Rowan Farrow’s brave reporting that lust of this sort is common in corporate boardrooms, and its practitioners no doubt applaud Trump for parading it and trying to normalize it.

Gluttony is another sin of conservatism. It is the desire to consume as opposed to hoarding. Ted Cruz’s abandonment of Texas for Cancun was gluttony. He wanted to consume some nice weather and some leisure while the Texans he supposedly represents were shivering without heat or electricity in an ice storm. Trump is a notorious glutton, which can easily be seen in his girth. Many of the industries championed by conservatives involve gluttony. Flat top coal mining consumes the natural landscape, leaving only the husk behind. Likewise fracking. Promoting fossil fuels is a way of eating the earth right up. Belch.

The conservative approach to the pandemic last year was slothful. Trump and Republican governors just decided to let half a million people die rather than to take the needed actions. Indeed, Neoliberalism in general is slothful, consisting often in no more than a hope and a prayer that the market will swing into action and solve all problems. The market is, however, merely an artifact of social engineering and not a magic hand. Trump came into office promising to fix all those falling-down bridges and dilapidated airports. He never did. He was too lazy, as was his majority in Congress. They passed a tax cut on billionaires instead. The country is falling down around our ears because deregulating corporations and cutting their taxes are the primary goals of conservatives, not burnishing America’s assets.