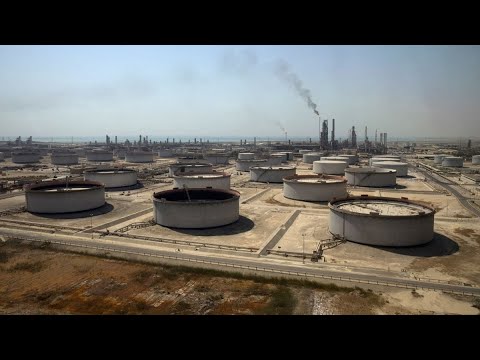 Ann Arbor (Informed Comment) – According to Al Jazeera, the Saudi military acknowledged that the Helpers of God or Houthis [pronounced like Ruthie] of Yemen targeted the Saudi oil port of Ras Tanoura on Sunday with a drone and ballistic missiles. A drone hit Ras Tanoura from the Gulf and pieces of a ballistic missile fell near a populated district of Dhahran.

The Saudis said that the drone that flew toward Ras Tanoura was aimed at oil storage facilities there, but was intercepted. The city is the largest oil shipping port in the world. Saudi Arabia typically produces 11% of the world’s daily petroleum supply, and over 6% of it comes out of Ras Tanoura.

The drones and missiles in the end caused no loss of life or damage to petroleum facilities. But obviously, this could have been a major disaster.

These cities are at the heart of the Saudi oil industry and the headquarters of ARAMCO, the Saudi-owned Arabian American Oil Company. Some 80,000 Americans live in Saudi Arabia, and the bulk of them reside in Camp Dhahran, a transplanted American suburb. The US embassy in Riyadh urged Americans to use caution when deciding to go out. That announcement angered some Saudis, who see doing business as usual as the only dignified response to the Houthi attacks.

Oil had already spiked toward $70 a barrel on the heels of Thursday’s decision by the Organization of Oil Exporting Countries (OPEC) not to raise output as the world economy begins to recover from the Covid recession. Rising demand without rising supply will raise prices. The possibility that Saudi oil facilities are in danger further sent prices up on Monday morning.

The Biden administration is pushing electric cars, which do not depend on Saudi petroleum but are run off free wind or sun rays, which can’t so easily be endangered by drones. Greening US transportation is key to our security, as Sunday’s attacks clearly demonstrated.

In response to the Houthi drones and missiles, the Saudis launched massive air strikes on Sana’a and other Houthi-held cities in Yemen. Gee, that should calm things down.

Houthi spokesman Yahya Sarie said that his movement was trying to damage Aramco, as well as attempting to hit some military sites at nearby Dammam. He said Houthi fighters had launched 14 drones and 8 missiles, targeting not only the kingdom’s Eastern Province but also military sites in Asir and Jazan. He maintained that the attacks were a proportionate response to constant Saudi bombing of Yemen.

The attacks are a setback to the Biden administration, which held talks in Oman recently aimed at gradually winding down the Yemen war. Biden is no longer helping the Saudis prosecute it.

Saudi Arabia and its coalition have intensively bombed Yemeni towns and cities for nearly six years with relative impunity. They have high tech American, British and other sophisticated fighter jets and rockets. Their enemy, the Houthis, have no air force and are mainly a land guerrilla force. They don’t even have much in the way of anti-aircraft batteries. Most Houthi weaponry is American, coming from arms depots of the old Yemeni government of the late president Ali Abdallah Saleh, who allied with the Houthis and gave them the keys. So the Yemeni capital of Sana’a and other north Yemeni cities have been gradually bombed to rubble by the Saudis, who according to one report manage to hit civilian targets like schools, apartment buildings and bridges one third of the time.

Rajih Badi, the spokesman for the Yemeni government in exile of President Abd-Rabbuh Mansour Hadi, which lost much of Yemen to the Houthis, blamed the Biden administration for the attack. Biden removed the Houthis from the terrorist watchlist because it prevented aid organizations from getting food and supplies to north Yemen (they would have to deal with the Houthis and so would become terrorists themselves). Badi’s statement is silly. The Houthis have hit Saudi Arabia occasionally, and the terror designation was a recent stunt of Trump’s secretary of state Mike Pompeo. He put it in place because he knew Biden would have to lift it to avoid the mass starvation of Yemenis, and then he could (like Badi) attack Biden over removing the designation.

The Houthis are engaged in hard fighting in a bid to take the southern Yemeni province of Marib, which, if they succeed, would deal a harsh blow to the Saudis, the United Arab Emirates and the Mansour Hadi government.

The Houthis are Zaydi Shiites, very different from the Shiites in Iraq and Iran. They don’t have ayatollahs and for the most part don’t engage in the same Shiite rituals. Iran gives them small monetary and arms aid, which is likely for the most part smuggled through the port of al-Hodeida on the Red Sea. The Yemen Civil War is, however, largely an internal, Yemeni affair and Iran does not have command and control over the Houthis.

The movement began as a Zaydi protest against Saudi attempts to proselytize them into adopting the Wahhabi form of Islam common in Saudi Arabia, the Saudi version of which despises Shiites of all kinds.