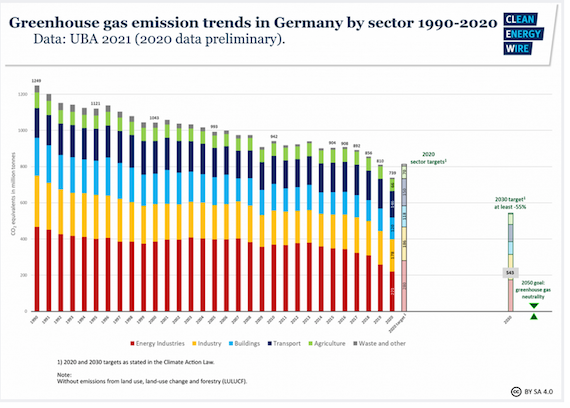 By Kerstine Appunn and Julian Wettengel | –

( Clean Energy Wire) – Germany’s greenhouse gas emissions dropped nearly nine percent in 2020 – the largest annual fall since 1990 – as the effects of the COVID-19 pandemic pushed down the use of fossil fuels and added to the effects of the shift to renewable energy sources, mild weather and rising CO2 prices. Estimates released by the Federal Environment Agency (UBA) showed that emissions fell in all economic sectors, most notably in energy and transport, as lockdown measures severely restricted economic activity and movement for months. This also means that almost all sectors have reached their emissions reduction targets for 2020 and Germany’s overall goal of a 40 percent emission reduction over 1990 has been achieved. The exception is the buildings sector, which emitted about 2 million tonnes of CO2 more than allowed. Germany’s newly installed Council of Experts on Climate Change will now assess the emissions data and present a report by mid-April.

Germany’s greenhouse gas emissions fell 8.7 percent in 2020, as the coronavirus pandemic threw Germany’s economy into recession and lockdown measures put a damper on public life and mobility. The pandemic added to the effects of the shift to renewable energy sources, mild weather and rising CO2 prices and caused the biggest emissions drop since 1990. Preliminary data released by the Federal Environment Agency (UBA) showed that all economic sectors decreased climate-harmful emissions, with a combined reduction of about 70 million tonnes CO2 equivalents (CO2-eq), bringing the country’s total emissions to 739 million tonnes.

“We see climate policy instruments starting to work, especially the expansion of renewable energies and CO2 pricing. But without the corona lockdowns and their restrictions on production and mobility, Germany would have missed its 2020 climate target,” UBA president Dirk Messner said at a press conference. This means that emissions will rise again when the economy picks up, he added, warning that this would particularily be true for the transport sector. Messner attributed one third of 2020 emission reductions to corona effects. “But that means two-thirds have been due to structural changes and climate measures,” he said.

Compared to 1990, German emissions decreased by 40.8 percent, which means the country has overshot its original target of reducing them by 40 percent. All but one sector reached their assigned greenhouse gas reduction targets for 2020. The exception is the buildings sector, which emitted about 2 million tonnes of CO2 more than allowed. However, Germany will have to introduce more ambitious climate action over the coming decade. The European Union has decided to raise its 2030 climate target, which almost certainly means Germany will have to do more as well.

Environment minister Svenja Schulze said: “The fact that Germany has now achieved its climate target for 2020 after all is no reason for us to rest on our laurels. The higher EU climate target will also demand more from Germany”. Schulze suggested that the government doubles the pace of wind and solar power expansion in this decade and said further measures have to be examined in the buildings sector. She said: “Disasters and economic slumps are no substitute for effective action against global warming”.

Patrick Graichen, head of think tank Agora Energiewende* said emissions are likely going to rise again in the next three years, due to catch-up effects after the corona crisis and the lack of expansion of wind and solar plants. “The current growth in renewable energies is not sufficient to compensate for the end of nuclear energy in 2022,” he said.

“Without the corona lockdowns, Germany would have missed its 2020 climate target.”
Dirk Messner, UBA president

Germany’s data mirror developments seen in major economies around the world. The COVID-19 pandemic in 2020 triggered the largest annual drop in global energy-related CO2 emissions since World War II, recent data published by the International Energy Agency (IEA) has shown. They fell by about six percent, but levels quickly rebounded as countries began to recover from the economic crisis. In December 2020, global emissions were two percent higher than they were in the same month a year earlier. Emissions in the European Union remained below 2019 levels throughout the year, as did Germany’s emissions (compared by quarter).
Total energy use at historic low, coal consumption plummets

The drop in Germany’s emissions was expected after energy market research group AG Energiebilanzen (AGEB) had said in December that energy consumption fell to a “historic low” in 2020. This pushed down energy-related CO2 emissions – those that come from using fossil coal, gas and oil to generate electricity or heat, which make up about 85 percent of total greenhouse gas emissions in the country.

The coronavirus lockdown measures reduced activity in transport – notably aviation, causing a drop in kerosene and oil use – and industry, manufacturing, trade and services, which reduced fossil gas consumption and electricity needs, AGEB had said. As less power was consumed and renewable sources increased their share, lignite and hard coal use fell significantly by 23 million tonnes CO2-eq and 13 milliton tonnes respectively. This was also due to rising CO2 prices in the EU Emissions Trading System (ETS) and low gas prices, triggering a shift to gas power instead of coal, UBA’s Dirk Messner said. In addition, mild weather, and long-term trends, such as increased energy efficiency, helped bring down emissions.
Info-Box: 2020 change in emissions in the sectors energy industry, transport, industry, buildings, agriculture and waste

All areas of the economy reduced their greenhouse gas emissions, with the energy sector leading with a drop of 14.5 percent to 221 million tonnes CO2 equivalents.

In the agricultural sector, greenhouse gas emissions fell by 1.5 million tonnes of CO2 equivalents (minus 2.2 percent) to 66 million tonnes, staying within its 2020 budget of 70 million tonnes. The main reasons were declining cattle numbers and dryer weather conditions which led to a reduced use of mineral fertilisers, UBA said. Federal agriculture minister Julia Klöckner said her ministry had delivered on the climate target by promoting state-of-the-art technology, by research and recommendations from its arable farming strategy.

Emissions in transport fell by 11.4 percent to 146 million tonnes CO2-eq, compared to 2019. “In the transport sector the effect of reduced mobility during the corona crisis has a very large effect, everyone in the transport ministry should know this and make sure measures are in place to reach future targets,” Messner said.

Michael Müller-Görnert, transport policy spokesman for mobility association VCD said the federal government must quickly revise its climate protection programme. “The shift aways from combustion engine cars has to be accelerated and the alternatives to owning a car strengthened.” “Instead of new motorways, we should create pop-up cycle paths and make them permanent; instead of company car privileges and distance allowances, we should promote cargo bikes and public transport subscriptions,” he said in an emailed statement.

While emissions in the buildings sector, which mainly come from heating, also fell slightly, it is the only sector which did not reach its target. Germany’s climate law stipulates that the responsible ministry of interior must propose an emergency programme within four months with measures to ensure the targets of the next years will be reached. This automatic response demanding immediate action from every ministry that fails to stay within its assigned emission budget could well be the “game changer” in Germany’s climate policy, Messner said. “It means that every minister is now also a climate minister,” environment minister Schulze said.

Liberal democratic MP Lukas Köhler on the other hand, said this proved “the pointlessness of the sector targets in the Climate Action Law”. “Just because people stayed home more because of corona, the government now has to announce immediate measures in the buildings sector instead of the transport sector,” he wrote on Twitter.
“First time the Council of Experts on Climate Change will spring into action”

Germany adopted its first-ever major climate law at the end of 2019. Thus, 2020 was the first full year for which each economic sector had binding greenhouse gas emission reduction targets under the new legislation. The law also introduced a council of independent researchers to evaluate the emissions data and provide a scientific assessment.

“This is the first time the Council of Experts on Climate Change will spring into action,” Brigitte Knopf, secretary general of the Mercator Research Institute on Global Commons and Climate Change (MCC) and one of the council’s five members, told Clean Energy Wire. “We will assess the emissions data published by the Environment Agency and present a report to the German government by mid-April.”

Should a sector not reach its target, the government would be obliged to present an emergency programme of climate action measures. The independent experts then get to assess “the assumptions regarding greenhouse gas emission reduction on which the measures are based,” says the law.

The role of the council was weakened from early drafts of the law to its final version. Originally, it was meant to assess the government’s annual climate action reports, much as the independent Energiewende monitoring commission comments on the annual German energy transition reports. 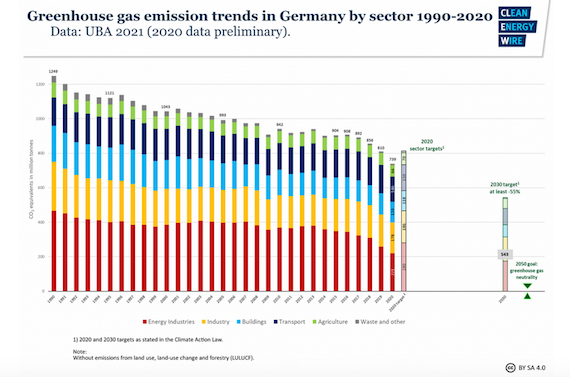 The drop in emissions is a “one-off effect of the coronavirus crisis” and they will rise again unless the government introduces effective climate policy, said Christiane Averbeck, managing director of Climate-Alliance Germany, a network of 115 organisations including environmental groups, development groups, churches, trade unions and consumer associations. “It is more important than ever that the German government sets the pace in climate protection. Even in an election year.”

Jan Kowalzig, climate expert at Oxfam Germany said that warned that “the usual climate action saboteurs will try to use the new data to argue against more ambitious targets and greater efforts”. “With its current commitment to climate action, Germany is still not making a fair contribution to limiting global warming to a maximum of 1.5°C […] and thus still not preventing catastrophic consequences, especially for the poorer countries of the Global South,” he said.

The Climate-Alliance Germany called on the government to initiate a reform of the climate action law before the national election in September. Germany will head to the ballots to elect a new federal parliament. Since the previous election in 2017, climate and energy have consistently moved up among voter priorities. A string of hot, dry summers that took a toll on the country’s environment have contributed to massive climate protests led by the Fridays for Future movement, which put emissions-reduction efforts at the heart of public debate. With the coal power phase-out and its comprehensive Climate Action Programme 2030, the government of parting Chancellor Angela Merkel also implemented major steps seen as crucial for climate neutrality by the middle of the century. At the same time, issues like reviving renewables expansion, transforming the car industry, green hydrogen production and carbon pricing are all energy transition challenges that continue to split opinions along party lines.

* Like Clean Energy Wire, Agora Energiewende is funded by Stiftung Mercator and the European Climate Foundation.