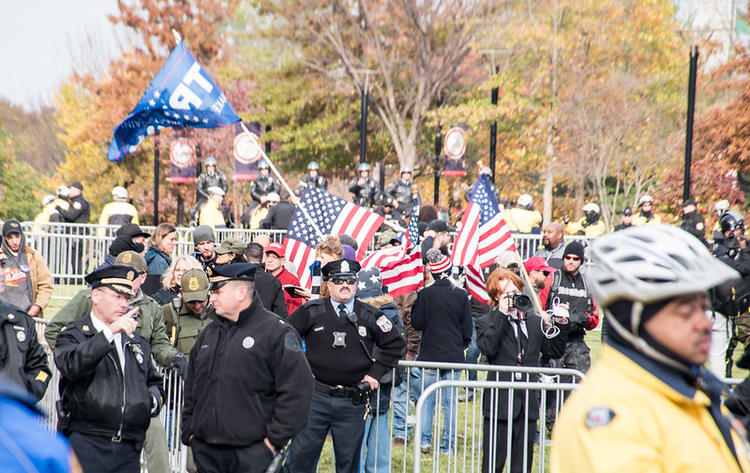 By Matthew Valasik and Shannon Reid | –

As the U.S. grapples with domestic extremism in the wake of the Jan. 6 insurrection at the U.S. Capitol, warnings about more violence are coming from the FBI Director Chris Wray and others. The Conversation asked Matthew Valasik, a sociologist at Louisiana State University, and Shannon E. Reid, a criminologist at the University of North Carolina – Charlotte, to explain what right-wing extremist groups in the U.S. are doing. The scholars are co-authors of “Alt-Right Gangs: A Hazy Shade of White,” published in September 2020; they track the activities of far-right groups like the Proud Boys.

What are U.S. extremist groups doing since the Jan. 6 riot?

Local chapters of the Proud Boys, Oath Keepers, Groypers and others are breaking away from their groups’ national figureheads. For instance, some local Proud Boys chapters have been explicitly cutting ties with national leader Enrique Tarrio, the group’s chairman.

Tarrio was arrested on federal weapons charges in the days before the insurrection, but he has also been revealed as a longtime FBI informant. He reportedly aided authorities in a variety of criminal cases, including those involving drug sales, gambling and human smuggling – though he has not yet been connected with cases against Proud Boys members.

When a leader of a far-right group or street gang leaves, regardless of the reason, it is common for a struggle to emerge among remaining members who seek to consolidate power. That can result in violence spilling over into the community as groups attempt to reshape themselves.

While some of the splinter Proud Boys chapters will likely maintain the Proud Boys brand, at least for the time being, others may evolve and become more radicalized. The Base, a neo-Nazi terror group, has recruited from among the ranks of Proud Boys. As the Proud Boys sheds affiliates, it would not be surprising for those with more enthusiasm about hateful activism to seek out more extreme groups. Less committed groups will wither away.

How does that response compare with what happened after 2017’s ‘Unite the Right’ rally in Charlottesville?

Neither the Capitol insurrection nor the Charlottesville rally produced the response from mainstream America that far-right groups had hoped for. Rather than rising up in a groundswell of support, most Americans were appalled – some so much that they have abandoned the Republican Party.

Additionally, right-wingers have been hit hard by the post-insurrection actions by large technology companies like Facebook, Twitter, Apple, Google and Amazon. They took down far-right group members’ accounts and removed right-wing social media platforms, including permanently blacklisting Donald Trump’s Twitter account and temporarily blocking all traffic to Parler, a conservative social media platform. Those steps are more significant than earlier moderation and algorithm changes those companies had undertaken in previous efforts to curb online extremism.

Another major difference is the lack of regret. Nobody on the right wanted to be associated with Charlottesville after it happened. Figureheads of the far right who had initially promoted that rally saw the negative public reaction and distanced themselves, even condemning the “Unite the Right” rally.

After the insurrection at the Capitol, their response was different. They did not split and blame other right-wing groups. Instead, conservative and extreme-right circles have united behind a false claim that they did nothing wrong, and alleged, despite all the evidence to the contrary, that left-wing activists assaulted the Capitol – while disguised as right-wingers.

Some members have left extremist groups in the wake of the Jan. 6 violence. The members who remain, and the new members they are attracting, are increasing the radicalization of far-right groups. As the less committed members abandon these far-right groups, only the more devout remain. Such a shift is going to alter the subculture of these groups, driving them farther to the right. We expect this polarization will only accelerate the reactionary behaviors and extremist tendencies of these far-right groups.

Right-wing pundits and conservative media are continuing to stoke fears about the Biden administration. We and other observers of right-wing groups expect that extremists will come to see the events of Jan. 6 as just the opening skirmish in a modern civil war. We anticipate they will continue to seek an end to American democracy and the beginning of a new society free – or even purged – of groups the right wing fears, including immigrants, Jewish people, nonwhites, LGBTQ people and those who value multiculturalism.

We expect that these groups will continue to shift more and more to the extreme right, posing risks for acts of violence both large and small.

Have far-right extremists’ views toward the police changed?

With a Democratic administration and attorney general, the far right will no longer view federal law enforcement agencies as friendly, the way they did under the Trump administration. Rather, they view the police as the enemy.

Even before Joe Biden took office and the Republicans officially lost control of the U.S. Senate, the Capitol riot showed this divide between right-wing extremists and police. A Capitol Police officer was assaulted with a flagpole bearing an American flag, and some members of the mob were police officers and military personnel. Many more were military veterans.

It’s not clear what this different view of law enforcement means for police officers, active-duty military and veterans who are members of right-wing groups. But we anticipate that only those who are most zealously committed to far-right causes will remain active. That, in turn, will push those groups even farther to the extreme right.

Has anything changed for militias since Biden has become president?

In 2009, the Department of Homeland Security issued a report warning about the growing membership in far-right groups, including their active recruitment of military veterans. Shortly after the report was released, Republicans in Congress pushed for the report to be retracted and for dramatically reducing the federal effort to monitor far-right groups in the U.S. This permissive atmosphere allowed far-right groups to grow and spread nationwide.

The Trump administration further served far-right groups by failing to pay out federal grants for grassroots counterviolence programs, by refusing to help local law enforcement agencies with equipment or training to deal with these groups, and by routinely downplaying the violence perpetrated by these white power groups. Essentially, far-right groups were unpoliced for the past decade or more.

But that approach has ended. Merrick Garland’s appointment as Biden’s attorney general is a big signal: In his career at the Department of Justice before becoming a federal judge, Garland supervised the investigations of the 1995 Oklahoma City bombing and the 1996 Atlanta Olympics bombing.

These were two of the most noteworthy acts of far-right domestic terrorism in the nation’s history. Garland has said that he will make fighting right-wing violence and attacks on democracy major priorities of his tenure at the head of the Justice Department.

In January, Canada designated the Proud Boys and other right-wing groups as terrorist organizations, which puts pressure on U.S. law enforcement to reconsider how they evaluate, investigate and prosecute these extremist groups. Beyond law enforcement’s treating these far-right groups like street gangs, there are also laws in place to combat violence associated with domestic terrorism.

It appears that U.S. prosecutors may finally begin to take seriously the violent actions of Proud Boys, especially as more and more members are being charged with coordinating the breach of the U.S. Capitol Building.

But as police power comes to bear on these violent right-wing groups, many of their members remain at least as radicalized as they were on Jan. 6 – if not more so. Some may feel that more extreme measures are needed to resist the Biden administration.