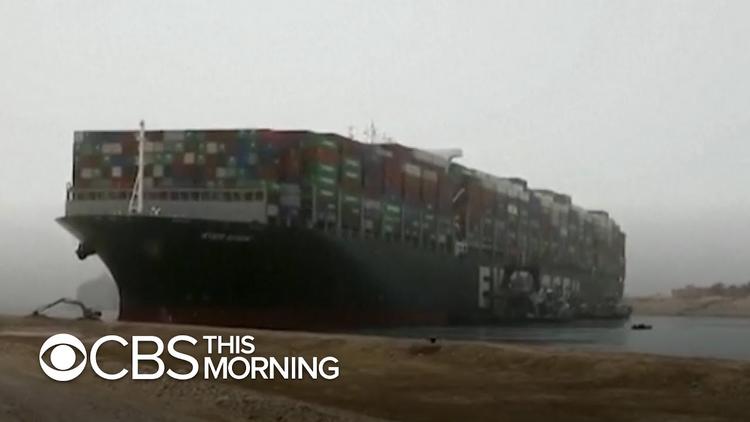 ( Middle East Monitor) – The world is closely following the details of the Suez Canal obstruction, a canal through which 12 per cent of international shipping trade passes. The obstruction was caused by a colossal ship that ran aground and the failure of the attempts to dislodge it.

A sandstorm caused the gigantic ship Ever Given to become wedged sideways across the canal, blocking the southern part that only allows traffic through one direction. This means that no other ships can pass through.

The Suez Canal Authority announced that the ship ran aground primarily because of the lack of vision due to bad weather conditions caused by a sandstorm passing through the country. As a result, the statement explained, control over the ship was lost, causing it to veer sideways.

Has the Egyptian government been able to manage the crisis?

Although this is one of the worst crises to hit this international waterway, the Egyptian government has dealt with it as if it were a domestic crisis. It began with disregard of the issue, then with the release of conflicting statements by officials, and finally, with the announcement that the crisis had been resolved and navigation across the canal had been fully restored.

As a result of the confusion over the Egyptian government’s management of the crisis, controversy prevailed across social media within Egypt. There are those who mock and criticise the Egyptian government’s mismanagement of the crisis, and those who highlight the significance of the new canal branch opened by the head of the military coup’s authority in 2015.

According to Reuters, the purpose of the new canal branch is to permit passage in both directions along the 35 kilometre stretch of the canal. However, this branch happens to be in the northern part after the region in which the canal expands into the Great Bitter Lake, whereas the incident occurred in the southern part of the canal that allows passage in one direction only.

The Suez Canal Authority allowed a flotilla of ships to enter the canal from its northern tip at Port Said on 24 March, in the hope that the Ever Given ship would by then have been floated. However, the vessels were forced to dock inside the waiting zone within the Great Bitter Lake.

What happened is that the Suez Canal Authority allowed a flotilla of ships to enter the canal from its northern tip near Port Said after a whole day of stoppage, in the hope that the ship would soon be floated.

How did the Egyptian media deal with the incident?

The Egyptian media celebrated the statement issued by the Suez Canal Authority in which it claimed that navigation had been restored after the ship was dislodged and floated, using satellite images to support its claim. Yet, the images showed that the ship had not moved nor changed its position.

That statement was followed by another, illustrating the extent of the blunder in dealing with the incident. Indeed, the situation had not improved in three days. Consequently, the Suez Canal Authority announced the temporary suspension of navigation across the canal, indicating that difficulties were being faced with dislodging and floating the ship.

Egyptian media attempted to belittle the magnitude of the crisis, observing that such an incident could happen in any other waterway around the world due to bad weather conditions or technical faults. A journalist close to the security agencies even went as far as to justify global interest in the Suez Canal ship incident as being due to the nonexistence of competition anywhere else in the world.

How long will the crisis last?

CNN has quoted an Egyptian official of the Suez Canal Authority, who refused to disclose his identity, stating that re-floating the ship is a rather complicated and technical job that could take days.

He also explained that the Suez Canal Authority does indeed have the necessary equipment to re-float the ship. However, it is not a question of possessing it, but rather a question of knowing how to operate it.

According to the Egyptian official, should the ship’s re-floating efforts be conducted in the wrong way, the matter could take a week. Meanwhile, if executed properly, it would not take more than a couple of days.

He added: “Had the efforts to re-float the ship been done properly right from the start, the crisis would have been resolved yesterday.”

The official went on to say: “After the success of the efforts to re-float the ship completely, it is unlikely that the ship will be able to continue sailing normally due to the damages it suffered. It will need to be tugged to the closest dock inside the Bitter Lake zone, 30 kilometres to the north.”

A salvation company has predicted that liberating the enormous container ship could take weeks. In the meantime, officials have stopped all ships heading towards the waterway since Thursday, in a new setback for world trade, according to Reuters.

Speaking to a Dutch TV channel, the chief executive of the Dutch firm Boskalis, Peter Berdowski, conveyed that it is too early to determine how long this task could take. He added: “It might take weeks depending on the situation.”

Ship tracking data noted that 206 container ships, oil and gas tankers and bulk substances ships were aggregating near the two ends of the canal. This catastrophe has become one of the worst cargo ship congestion incidents in years.

What is the expected amount of losses?

The media confusion and withholding of information about the ship’s incident indicate that the Suez Canal Authority is either unprepared for such an occurrence, and therefore is not up to standard, or that it does not realise the repercussions awaiting the Egyptian economy. Bloomberg noted that about $9.6 billion of daily shipping travel had been stopped by the incident. In addition, Saudi, Russian, Omani and US oil tankers have been hindered and are being held together with more than 300 other ships close to the southern and northern entrances of the Suez Canal, waiting for it to re-open and for navigation across the canal to resume.

However, according to Egyptian sea shipping expert Hamdi Barghout, this is a rather modest estimation. He told Masrawy: “The cost of re-floating the ship alone will be in excess of $100 million.” He pointed out that the cost of a tugboat is $6,000 per hour. Therefore, the losses are expected to exceed Bloomberg’s estimates.

What is the significance of the new Suez Canal branch?

In a statement to Arabi21, economic expert Ahmad Dhikrallah expressed that right from the start, there had been utter miscalculation and mismanagement of the Suez Canal crisis.

He also noted: “The miscalculation is evident in the delay in issuing press statements about the crisis for more than 24 hours, although all world newspapers and news agencies followed the incident and its developments. Furthermore, the first statement issued by the canal’s authority was not at the level of responsibility. It failed to identify the problem and to propose solutions or give sufficient information, just like other statements addressing the Egyptian masses, as if this was not an incident that is being watched by the entire world.”

Dhikrallah remarked that the Suez Canal is of great global importance since 12 per cent of international trade passes through it. As a result, the blockage of shipping across the channel constitutes a large-scale crisis.

He added: “Houses of expertise should have been resorted to right from the beginning, to deal with a crisis this big, especially since the canal represents a strategic and important source of revenues that inject into Egypt’s economic artery $5-6 billion a year.”

The economics expert explained that as of late, a vast number of retired naval generals were appointed to the canal’s authority as pilots. The total number of naval pilots reached 350, although the maximum number required by the authority does not exceed 120, not to mention the lack of competence on the part of these generals who are unable to perform well as pilots.

When the ships enter into the Suez Canal waterway, pilots climb onboard and direct them as a flotilla with the assistance of one or two tugboats. From time to time, ships veer to the side, but this is quickly resolved without significantly impacting other ships.

Dhikrallah affirmed that the boasting by Egyptian journalists that the incident has shown the importance of the new canal branch, which burdens Egyptians and the Egyptian economy, is mere dishonesty.

Dhikrallah also stated: “We compare the cost of the return, and what matters to us is the economic feasibility of the branch or the expansion, and the size of profits and revenues this brings to the Egyptian economy.” He stressed that the addition contributed by the branch to the canal’s revenues is nominal and almost negligible. Therefore, the branch, by virtue of its cost to the Egyptian economy and the Egyptians, had no economic feasibility, irrespective of the number of ships passing through it.

Has the incident affected the global standing of the Suez Canal?

Assessing the Egyptian government’s management of the crisis, expert on strategic management and development Samir Al-Wasimi concluded that it lacked the basic standards of transparency and professionalism in crisis and risk management.

In an exclusive interview with Arabi21, he added: “With the absence of transparency and professionalism in dealing with the crisis, due to the excessive centralisation that is the making of the military regime in Egypt since 1952 and until today, the Suez facility appeared to be weak and dilapidated despite possessing technical and specialist cadres.”

Al-Wasimi continued: “The existence of specialists is of no benefit in the shadow of despots who implement bad public policies that impact negatively on the performance of the state’s general administration and executive management.”

Al-Wasimi explained that the state of confusion in which the Egyptian government appeared to be regarding managing the crisis was the product of a bad public policy in the hands of a despot, affecting the ability to deal with crises professionally.

The strategic management expert concluded: “The minimum standards of transparency necessitate informing the Egyptian people and the world of what was going on inside the Suez Canal irrespective of the technical problem that is likely to occur in any facility anywhere in the world.”

CBS: “Suez Canal blockage felt across the world as trade comes to a pause”