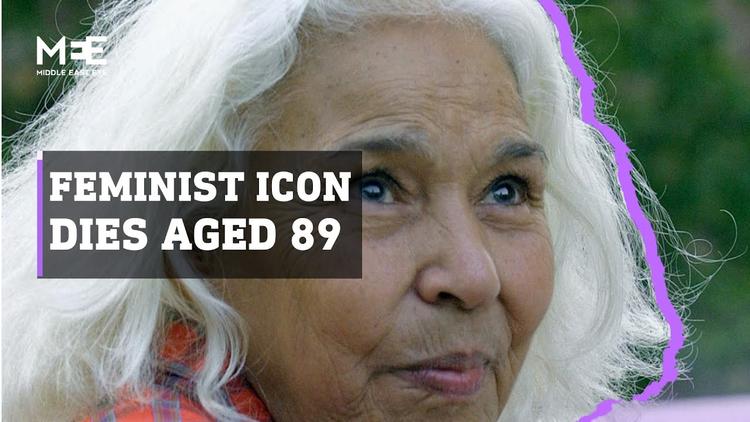 Egyptian novelist, physician, sociologist and global activist Nawal El Saadawi died on 21 March 2021 at the age of 89. The author of more than 50 books, she told me in one of our many interviews, in 2007, that she self-identified as

an African from Egypt, not from the Middle East … I am not from the third world. There is one world, that is a racist, capitalist economic world. I became a feminist when I was a child – when I started to ask questions to become aware that women are oppressed and feel discrimination.

Although her autobiography A Daughter of Isis (1986) is among the best known of her publications world-wide, she identified her vocation as that of a novelist: “I am mainly a novelist. Most of my books are novels.”

In fact, she was always writing a novel. Her 2004 work titled The Novel begins: “The novel caused tremendous outrage … Her life became her first novel.”

Arguably, the place to start in the evaluation of her works is what she deemed the function and perimeters of the novel. She wrote all her novels in Arabic. When asked about the translations of her works, she responded:

Can you translate music? So you can’t translate novels. At least 30% of the spirit of the work goes. Language is body, spirit, mind … You dream in your (native) language.

Yet she conceded that she wrote essays in English.

El Saadawi was a global iconoclast in the best sense of the phrase. In a world that has become compartmentalised, tribal, overtly racist, anti-science and unashamedly sexist, her novels espoused truths that made her unpopular with many in government and in the so-called establishment. Asked if there was one politician she respected, she explained, “In a system based on oppression, an angel will be corrupted. I don’t have in mind anyone who kept his promise.”

Her penchant for looking at a situation and calling out its components – even though they were shrouded in deceptive marketing – was remarkable. She once confessed to me, “If I don’t tell the truth, I don’t deserve to be called a writer.” She admitted in her autobiography:

Memory is never complete. There are always parts of it that time has amputated. Writing is a way of retrieving them, of bringing the missing parts back to it, or making it more holistic. If memory involves the recall of the things that happened, then the way to render a thing is to draw on creative thoughts.

A scientist and an artist

El Saadawi believed that to be whole – to recover the missing parts – one must embrace the science as well as the artistic and creative. She said:

I am a medical doctor … immersed in blood. I’d rather be with healthy people. I wanted to be a dancer. My father said, ‘Dancing means prostitution.’

Learning from such contradictions early on, El Saadawi became subversive in life and distinctly political in her writings. People have identified her works as political fiction and biographical fiction. To do so is to ignore the art or creativity of her writing. A more prudent evaluation would rest with the marriage of the politics of her life and the creativity that inspired her soul.

There is a clinical aspect to her writings. She relentlessly focuses on the issues without the trappings of romantic love and sentimentality. That is the key to evaluating and enjoying her works.

She admitted that she had been nominated for the Nobel Prize in Literature a couple of times, “but people don’t like my politics”. In a 2012 interview in Baltimore, El Saadawi told me:

This insistence on sharing her view of the truth on the condition of women, religion and politics is the key to the continued interest in her works. She never compromised because in many ways the condition of women globally has not much changed and because there is an ethos that persistently governs women, that, she believed, demanded unequivocal attention.

El Saadawi was born in 1931 in a village outside of Cairo. She refused to accept the limitations imposed on her by the religious, gender and colonial oppression most women of rural origin experienced.

She attended the University of Cairo and graduated in 1955 with a degree in psychiatry and rose to become Egypt’s Director of Public Health. Since she began to write over 50 years ago, her books – including the play God Resigns at the Summit Meeting (2006) have concentrated on women, specifically on Arab women, their sexuality and legal status.

In 1972, her first work of non-fiction Women and Sex evoked the antagonism of highly placed political and theological authorities in Egypt and the Ministry of Health was pressured into dismissing her. Under similar pressures, she lost her post as chief editor of a health journal and as assistant general secretary in the Medical Association of Egypt.

From 1973 to 1976 El Saadawi researched women and neurosis. In 1977, she published her most famous work The Hidden Face of Eve, which covered a host of topics relative to Arab women such as aggression against female children and genital mutilation, prostitution, sexual relationships, marriage and divorce and Islamic fundamentalism.

From 1979 to 1980 she was the United Nation’s advisor for the women’s program in North Africa and the Middle East. Later in 1980, as a culmination of the long war she had fought for Egyptian women’s social and intellectual freedom, she was imprisoned under the Anwar Sadat regime. She was released in 1982 and in 1983 she published Memoirs from the Women’s Prison in which she continued her bold attacks on the repressive Egyptian government. The year 1983 also marked the year that the English version of Woman at Point Zero was published after appearing in Arabic in 1975.

Even after her release from prison, El Saadawi’s life was threatened by those who opposed her work, mainly Islamic fundamentalists. Armed guards were stationed outside her home in Giza for several years until she left the country to be a visiting professor at European and North American universities.

She devoted her time to being a writer, journalist and worldwide speaker on women’s issues. In 2002, officials tried to forcefully divorce her from her husband, but international solidarity helped her to win her case. In 2004 she presented herself as a candidate for presidential election in Egypt. Then in 2007, the controversy of her play God Resigns at the Summit Meeting erupted. She said that those who condemned her hadn’t even read the play.

This was the power of Nawal El Saadawi, that her books – coldly scientific and endlessly creative – were seen as weapons in a war that is still to be won.