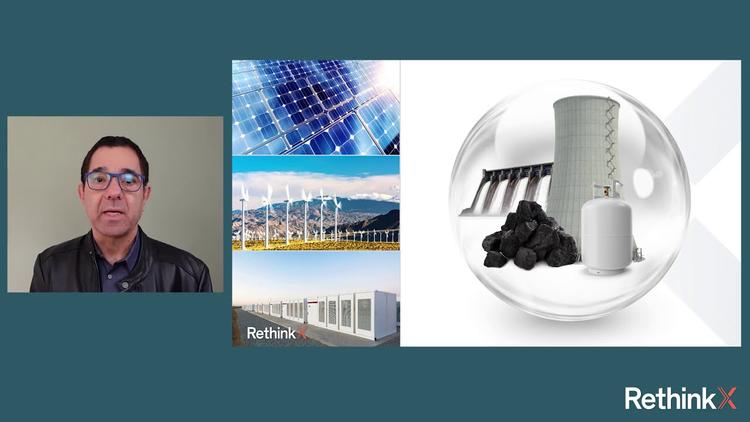 Ann Arbor (Informed Comment) – A new report by RethinkX, a think tank using the ideas of Tony Seba, who teaches Business at Stanford University, demonstrates that the value of fossil fuels and of the electric plants they fuel is vastly overstated by government agencies and financial analysts.

Seba and his colleagues point out that coal and nuclear have attracted $2 trillion in investments since 2010, on the basis that, say, a coal plant built in 2015 will go on producing electricity at 7.5 cents a kilowatt hour for 20 years, i.e. through 2045.

Bzzt. Wrong answer. Coal plants are routinely being driven out of business by ever cheaper solar, wind and battery installations, as well as by cheaper natural gas.

So coal can’t actually be expected to generate electricity at 7.5 cents a kilowatt hour (imagine burning ten 100-watt light bulbs for an hour) for twenty years.

Therefore, the coal plant isn’t worth what the Department of Energy or Wall Street thinks it is. It is worth much, much less. This is true of natural gas plants, too.

So what do you call it when people invest $2 trillion into an industry that is becoming worthless?

That, my friend, is a bubble.

A frightening characteristic of bubbles is that they burst. The market in securitized bad mortgages burst in 2008. The market in worthless fossil fuels could burst at any moment. That is, the over-valuation of coal and gas plants is a national security emergency.

One of the first big bubbles in modern capitalism was the tulip bubble or tulipomania in the Netherlands. Tulips were exported in the 1600s to Western Europe from the Ottoman Empire. They are fragile flowers and were hard to grow in Europe, but people went wild for them and everyone in the Netherlands of any standing felt as though they needed to have a collection. Wealthy Dutch merchants ran up the price in 1632, with fine bulbs costing the equivalent of $50,000 to $150,000, and some rare bulbs went for $750,000. People securitized tulips in the stock market and borrowed money to buy the securities, so they were highly leveraged. Since it was just a fad, and nobody actually needed a fancy tulip, the fad began passing, and the cost of each tulip declined. With each decline, people who had gone into debt to buy the flowers were more in debt, because they had expected future profits to cover the debts and now there were only future losses. The fad was over by the late 1630s, leaving many bankrupt Dutch behind.

So Tony Seba is saying that coal, gas and oil are like those early modern Ottoman tulips?

Tony Seba is saying that coal, gas and oil are like those early modern Ottoman tulips.

People are investing way too much money in death-spiral fossil fuels. (If you have them in your retirement portfolio, dump them fast).

Seba and his colleagues write,

“Capacity factor of conventional coal, gas, nuclear, and hydro power plants will not remain high or constant, but will instead decline dramatically over the next 10 to 15 years as they are outcompeted and disrupted by the combination of solar photovoltaics, onshore wind, and lithium-ion batteries (SWB). In fact, capacity factor in conventional energy has been dropping since at least 2010. For instance, the average capacity factor of coal in the United States has fallen from 67% in 2010 to just 40% in 2020 – first because of competition with cheap gas from fracking, and now because of SWB.14 In the United Kingdom, coal capacity factor has collapsed even faster, from 58% in 2013 to just 8% by 2019.”

One implication here is that coal plants don’t actually produce electricity for 7.5 cents a kilowatt hour in the U.S. any more. If you take into account the likelihood of severe under-utilization or early closure in the near future, it could be as much as 75 cents a kilowatt hour. All the money sunk in a coal plant on the assumption that it would have a 20 year life was invested based on a basic math error. Even still-experimental technologies like tidal power, using the energy of ocean waves, come in at 20 cents a kilowatt hour, considered too expensive to be practical. So what is practical about coal and gas?

Another take-away of this study is that the US government and private energy analysts have consistently and vastly underestimated the rate at which renewables are falling in cost. This underestimate has in turn helped falsely inflate the value of fossil fuels.

Seba and colleagues urge the Biden administration to take account of these findings to protect Americans from this de facto bubble and to move even more quickly to wind, solar and batteries.