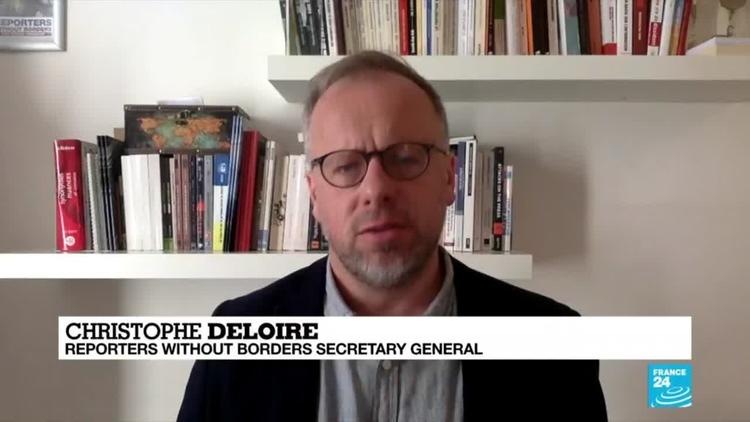 Ann Arbor (Informed Comment) – The France-based Reporters without Borders (RSF) has filed a criminal complaint with the Prosecutor-General of the Federal Court of Justices in Karlsruhe, Germany, against crown prince Mohammed Bin Salman and other Saudi officials for the murder of Washington Post columnist and US resident Jamal Khashoggi in 2018. The filing alleges a series of crimes against humanity committed against journalists in Saudi Arabia. The 500-page complaint, in German, presents the cases of 35 journalists, including Khashoggi. The other 34 are journalists and bloggers imprisoned in the kingdom, including blogger Raif Badawi.

The legal action comes on the heels of last week’s release by the Biden administration of a 4-page CIA memo assessing that Bin Salman was behind the assassination of Khashoggi.

Stephanie Kirchgaessner and Michael Safi at The Guardian note that the complaint was filed in Germany because German courts claim universal jurisdiction. As a result, a Syrian secret police officer was recently convicted in Germany of torture.

Interestingly, the RSF (the French acronym for Reporters without Borders) argued that Saudi Arabia is guilty of “crimes against humanity,” which international law defines as a deliberate, generalized and systematic attack on a civilian population. They identify journalists as the population being targeted by the crown prince and his fellow officials. This definition of crimes against humanity, present in the 2002 Rome Statute, has been incorporated into German law by virtue of a statute that recognizes “crimes against international law.” Reporters without Borders argues that journalists are victims of premeditated murder, torture, violence, sexual coercion, forced disappearance, illegal deprivation of physical liberty, and persecution. All of these are crimes against humanity according to German law.

RSF argues that since journalists are responsible for informing the public and holding officials to account, crimes against them are even more serious than in the case of other classes of people. I think they are saying that when journalists are persecuted the result is not only harm to them but also to the entire public, which is no longer able to find out information essential to the public weal or to hold government officials to account.

The complaint named five principal suspects, Mohammed Bin Salman, Saud al-Qahtani, and three others they charge are responsible for the assassination of Khashoggi.

The complaint quotes the CIA memo, released by the Office of Director of National Intelligence, in its entirety.

According to Reporters without Borders, Saudi Arabia ranks 170 out of 180 countries they surveyed on press freedom.

I think that in American law, RSF would have to prove standing, that is, that one of its members had been injured by these Saudi actions. I’m not sure it would be enough that they represent journalists in general. But given that German legislators have a law against breaking international law, all RSF is doing is asking the prosecutor general to find that Saudi Arabia violated that provision. Since German courts claim university jurisdiction, and since they have already convicted a Syrian for crimes he committed in Syria, it would be theoretically possible for the German justice authorities to rule against Bin Salman.

I don’t know enough about German law to know if it would be a problem that Germany would have to convict the perpetrators in absentia. Moreover, convicting the heir apparent of a fabulously wealthy and influential country is not like convicting a low level Syrian secret policeman and torturer.

Universal jurisdiction claims by a country’s judiciary can be very inconvenient for a country’s foreign policy. Belgium’s courts used to claim universal jurisdiction, but when a case was brought in them against Israeli prime minister Ariel Sharon, the Belgium legislature passed a law restricting the courts only to crimes committed on Belgian soil.

What the RSF complaint shows is that Bin Salman is likely to remain a pariah internationally because of his role in murdering Khashoggi, and that if King Salman were wise he would do as Abraham did and be willing to sacrifice his son’s political future for the sake of the welfare of Saudi Arabia.