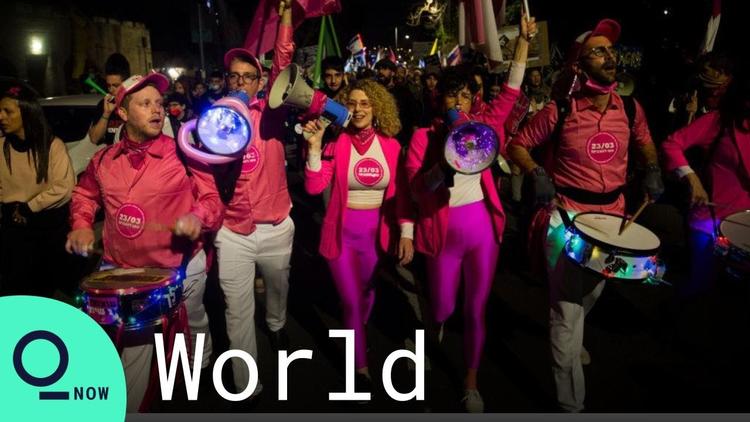 Ann Arbor (Informed Comment) – Thousands of Israelis demonstrated Saturday at various places against Israeli prime minister Binyamin Netanyahu, who is being tried for corruption, as the country goes to the polls Tuesday. This was the 39th consecutive weekly demonstration against the beleageured prime minister, who polls suggest faces an extremely close election. If he loses, and if the courts convict him, he could go to jail like his predecessor, Ehud Olmert.

The biggest demonstration was staged in Jerusalem in front of the prime minister’s official residence, with an estimated 20,000 joining in. It was the largest such rally since they began last week.

Crowds also gathered in front of Netanyahu’s private residence in Caesarea and at other big intersections, carrying placards urging people not to vote for him.

Tuesday’s election is the fourth in less that two years, amid doubts that Netanyahu and his allies will be able to form a government.

In an interview earlier on Saturday, Netanyahu vowed to reduce the power of the judiciary and to increase that of the executive, a reference to his hopes that another term as prime minister will allow him to tinker with the system in such a way as to make the prosecution of him go away.

Netanyahu is so desperate that he is courting the extremist Jewish Power [Otzma Yehudit] Party, which has a history of violence and wants to expel all persons of Palestinian descent from Israel and the Occupied territories. Netanyahu is also seeking to partner with “the Religious Zionist party headed by Bezalel Smotrich, a firebrand conservative and self-declared ‘proud homophobe.'”

Ironically, Netanyahu is also wooing the votes of Palestiian-Israelis. Many of the latter, though Israeli citizens, are living in “unrecognized” villages and the Israeli Right can sometimes attract their votes by promising to lift restrictions on new building or even repairs in these hamlets.

In parliamentary systems such as Israel, if no one party or pre-organized coalition gets 51 percent of seats in an election, party leaders can still make deals and put together a majority in the month after the election. But if the parties despise one another so much that they refuse such a coalition, you end up with a “hung parliament.” And there is only one thing you can do then.

Nidal Muhammad Watad reports in Arab48 that many Israelis are filled with dread that they’ll have to go to the polls again this summer and that there will be governmental gridlock in the meantime.

The proportions of seats that the major parties are getting in these serial elections are not changing much, suggesting that a hung parliament is a real possibility. Benny Gantz’s center-right Blue and White coalition formed a government of national unity with Netanyahu’s far right Likud Party after the last election, but a repeat of that development seems remote, hence Netanyahu’s desperation in scraping the bottom of the far-far-far right barrel looking for a seat or two.

Israel’s political crisis could be resolved easily if one of the large Jewish parties were willing to accept Palestinian-Israeli parties as formal partners. Such acceptance is off limits in Israel, for racialist reasons, sort of as though Democrats and Republicans in the US would refuse to allow Black people to join them.

Also on Saturday, Arab48 reports, Netanyahu said that he would not annex more of the Palestinian West Bank unless he got a green light from Washington. He was trying to deflect criticism from the centrist parties that his annexationist ambitions had put him on a collision course with President Biden, who is known to favor a two-state solution that further Israeli annexations would make impossible.

Benny Gantz, Netanyahu’s rival, expressed fears that Washington will “take revenge” on Israel for Netanyahu’s excesses during the past four years. (I.e., as long as Netanyahu had his special bond with Trump and Jared Kushner, he rushed to expand Israeli squatter settlements on Palestinian territory and threatened to annex large swathes of the Jordan Valley, steps that annoyed Biden.)

Arab48 is a newspaper for the 20 percent of Israelis of Palestinian heritage, who were not expelled in 1948 when Israel was formed, unlike some 740,000 Palestinians who were ethnically cleansed and whose descendants now for the most part live in Gaza, the West Bank, Jordan and Lebanon.