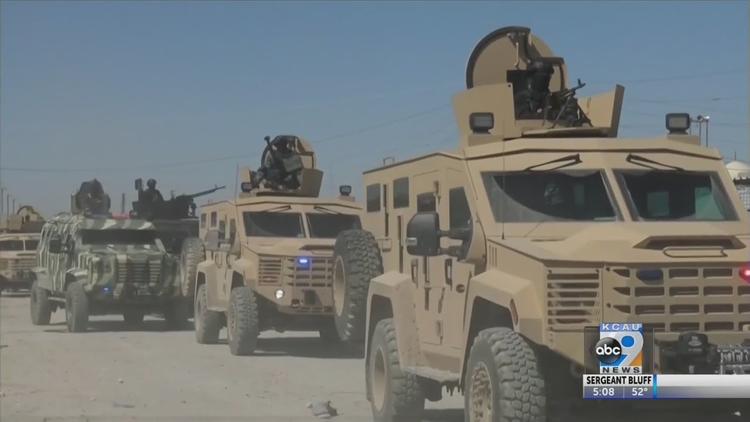 Ann Arbor (Informed Comment) – The Iraqi News Agency reports that Qasim al-Araji, Iraq’s National Security Adviser, said on Wednesday that his country had reached an agreement with Washington specifying that there would be no foreign military bases in Iraq. During a press conference alongside foreign minister Fuad Hussein, al-Araji added that the Biden administration had agreed to withdraw a significant number of its troops from Iraq. As of January, the Trump administration had ordered the US troop contingent in Iraq to be reduced to 2,500, so al-Araji is saying it would be much less than that. He said that Baghdad and Washington agreed that the Iraqi army was making excellent progress in mopping up the remnants of the ISIL terrorist group. He said, “it was agreed that our security forces would take over the mission of fighting the terrorist Daesh [ISIL].”

The implication is that the US military mission in Iraq, initiated by President Obama in 2014 when the country had lost 40% of its territory to the ISIL extremists, will now end.

As for those American service personnel who would remain as trainers, al-Araji said that Iraq would ensure their safety.

Bases housing US troops in Iraq have received almost daily mortar and rocket fire from Shiite militias who insist that all the foreigners should leave.

There are a lot of ironies about al-Araji making this announcement. He has been a fighter in the Badr corps, the Iran-trained Shiite paramilitary of the Islamic Supreme Couoncil of Iraq. Hadi al-Ameri, who now leads Badr, is the head of the Fateh bloc in parliament. He was arrested by the US in 2007 and held at Camp Bucca for nearly 2 years on suspicion of helping bring into Iraq war materiel from Iran that killed or injured US troops. He later served in parliament and in 2017 became the Interior Minister (the equivalent to the US head of the Department of Homeland Security). During the fight against ISIL in 2014-2018, al-Araji kept accusing the US of backing ISIL (also a common Iranian charge), which of course is pure, false propaganda.

After the odious Trump assassinated Iranian Gen. Qasem Soleimani on January 3, 2020 at Baghdad International Airport, along with Shiite militia commander Abu Mahdi al-Muhandis, the Iraqi parliament demanded that the prime minister find a way to expel US troops from the country. Iraqi Shiite militias (of the sort to which al-Araji belonged) began shelling bases housing US troops. The subsequent prime minister, Mustafa al-Kadhimi, slow-rolled this demand for expulsion of the US, but did achieve reductions in troop strength from 6,000 to 2,500. He is said to acknowledge in private that he had a duty to get US troops out, given the parliamentary decree. The US keeps saying it was an advisory opinion by parliament, but this is not true, it is just US propaganda.

Al-Zaman [The Times of Baghdad] says that Iraqi authorities are attempting to convince the US to withdraw all troops from Iraq within 1.5 years, rather than the three years that Washington apparently proposed. Moreover, during that year and a half, the Iraqi government wants the US troops to have solely a training mission, helping the Iraqi military up its game. That is, al-Zaman also says that the Iraqi position is that the US combat mission in Iraq has ended.

They also want to reassert complete Iraqi sovereignty over the Ain al-Assad and Harir airbases, where many American troops have been hosted. (Apparently these Iraqi bases were partitioned, with an American compound established).

President Biden has said that he would like to end the US Forever Wars.

Washington appears to continue to be afraid that if the US pulls out entirely, Iraq will fall under Iranian influence. Iraq needs Iranian electricity and refined fuel, and the US would like to try to find alternatives for Baghdad. The US has never understood Iran’s soft power with the 60% of Iraqis who are Shiites, a sentiment the departing US is unlikely to be able to change.