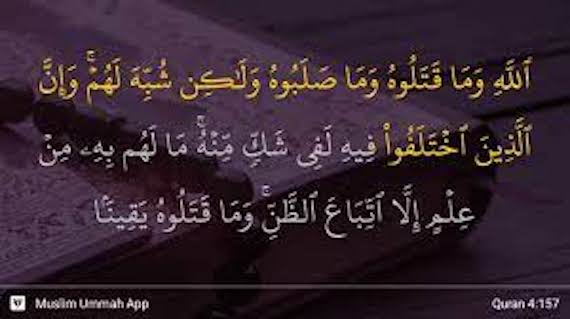 Ann Arbor (Informed Comment) – Through Christian history, and especially since Christians became numerous and powerful as the Roman Empire adopted the faith as its state religion, Jews have been senselessly victimized around Easter and falsely blamed for the killing of Christ.

Interestingly, the Qur’an denies that the Jews were at fault in Jesus’ execution. Christians could learn from it.

The charge that Jews were behind Jesus’ death is ahistorical, since crucifixion is a Roman method of execution, typically applied to robbers and political rebels. John Dominic Crossan argues that the later generations of Christians who produced the four gospels did not any longer have a firm grasp of the events that led to Jesus’ death. He suspects that Pontius Pilate, known to be a Roman hard liner who showed no sensitivity to local Jewish concerns, probably had Jesus summarily executed after briefly informing the Jewish high priest he intended to do so. That Pilate would have yielded to pressure from a Jewish mob is highly unlikely.

The Gospel of Mark presents a “two trial” scenario. First there is a Jewish tribunal, which finds Jesus a heretic but appears to have concluded that there was nothing the Jewish authorities could do about him. So they turned him over to the Romans, who were the ones to execute him. Mark is the least anti-Judaic of the Gospels.

The chapter of The Women, Qur’an 4:157, says of the Jews of Western Arabia:

“And their assertion, ‘We killed Jesus Christ the son of Mary, the Messenger of God.’ But they did not kill him, nor did they crucify him, but it was made to appear to them so. Those who disputed over this entertain doubts about it. They have no knowledge and are only followers of conjecture. They most certainly did not kill him.”

In a new article, I argue that the Qur’an is upholding history against the war propaganda of Iranian, Sasanian ruler Khosrow II (d. 628). Khosrow attacked the eastern Roman Empire in 603 and went on fighting it until his death, managing to grab the Near Eastern provinces of eastern Anatolia, greater Syria, the three Palestines and Egypt for Iran. It was during this early sixth century world war that Muhammad was preaching the Qur’an.

Khosrow II, a Zoroastrian, is alleged in eastern Roman sources to have taunted his rival Emperor Heraclius that the Jews killed Christ. He implied that if the Romans are so weak they worship a figure summarily dispatched by Jews, they can hardly hope to win a war against a Zoroastrian empire. Iranians of the time gloried in the teachings of their own prophet, Zarathustra, whose Gathas are hymns to the one God Ahura Mazda.

I think those Western Arabian Jews who made the boast were parroting Iranian propaganda and were probably allied with Iran. I think the Qur’an is largely pro-Christian and pro-Roman, and so is knocking down this Iranian propaganda. But it is also making a theological argument.

I discuss the war as a context for the Qur’an in my book:

Muhammad: Prophet of Peace amid the Clash of Empires (Bold Type Books, 2018),

In the article, I suggest a new reading of the Qur’an’s chapter of The Family of ʿImrān 3:42-56 as an account of Jesus’ two trials, after the fashion of the Gospel of Mark. The passage speaks of Jesus encountering rebelliousness (kufr) among his own people and of some of them conspiring against him. “They conspired, and God conspired, and God is the best of conspirators’ (The Family of ʿImrān 3:54).

I argue that 3:55-3:56 represents a change of scene, to one where it is implied that pagans (alladhina kafaru) have “defiled” Jesus. I think this is a reference to the pagan Romans, such as Pontius Pilate, crucifying him.

“God said, ‘Jesus, I will cause you to perish and raise you to me and purify you from the pagans (alladhīna kafarū), and will set those who follow you above the pagans until the Judgment Day. Then to me will be your return, and I will judge between you with regard to those things about which you differ. As for the pagans, I will chastise them excruciatingly in this world and the next, and they will have no helpers.’”

So it is God himself who tells Jesus, “I will cause you to perish,” i.e. through the instrument of Pontius Pilate, the pagan. I think alladhina kafaru always means “pagans” in the Qur’an, and that Jews and Christians are never referred to by this two-word phrase. There is a group called “those who paganized from among the people of the Book,” but the very need to distinguish it demonstrates that ordinary Jews and Christians are never called kafir (pagan).

But God will purify Jesus from the defilement of the crucifixion. God will then “raise” Jesus “up” to himself.

God’s agency here is in accord with with Matthew 26:54, where Jesus rejects Peter’s rescue attempt, saying, ‘But how then would the scriptures be fulfilled, which say it must happen in this way?’ That is, God had foreordained Jesus’ death. Consider also John 3:16, where it is God who ‘gave’ (edōken) Jesus so that all who believed in him might have eternal life. “Gave” here implies “caused to perish,” as in Qur’an 3:55. The statement that God raised Jesus up to himself resembles Luke 24:51, which says of the resurrected Christ, “While he was blessing them, he withdrew from them and was carried up into heaven.”

So I believe that the Qur’an was upholding a version of Jesus’ two trials similar to the account in the Gospel of Mark, except that it takes the Jewish tribunal much less seriously than Mark does. From the point of view of the Qur’an, the Jewish conspiracy against Jesus was deflected by God and nipped in the bud. The whole blame for his death falls, it is implied, upon the pagan Romans.

Some Muslims of the Abbasid era (750-1258) came to believe that the Qur’an’s assertion that the Jews did not kill or crucify Christ meant that Jesus was not crucified. The verse does not say that Jesus was not crucified, however, only that the Jews did not crucify him, which is certainly correct. Some adopted a Gnostic theory that God took Jesus up to heaven without his having died. Others adopted a Docetic theory that someone else was substituted for Jesus on the cross. Other Muslims accepted the crucifixion, including the Neoplatonic encyclopedists, the Brethren of Purity,

The Qur’an mentions Jesus dying on more than one occasion, and this adoption into Islam of a Christian Gnostic heritage is a relic of the medieval era for which there is no warrant in the scripture itself.

What is important here is that the Qur’an denies that Jews, past or present, bear any guilt or responsibility for the crucifixion of Christ. It was, 3:55-56 insists, a pagan affair and any way the working of God’s will. Jews, Christians and Muslims are united in their worship of the one God and their reverence for Old Testament patriarchs and prophets– Abraham, Joseph, Moses, Solomon, David. Christians and Muslims share a reverence for John the Baptist, Mary and Jesus. By focusing on what they have in common rather than on their doctrinal and other differences, greater harmony can be attained in our multicultural societies at a time of globalization.

A joyous Easter to Christians, a spiritually fulfilling Passover to Jews, and a blessed upcoming Ramadan to Muslims…