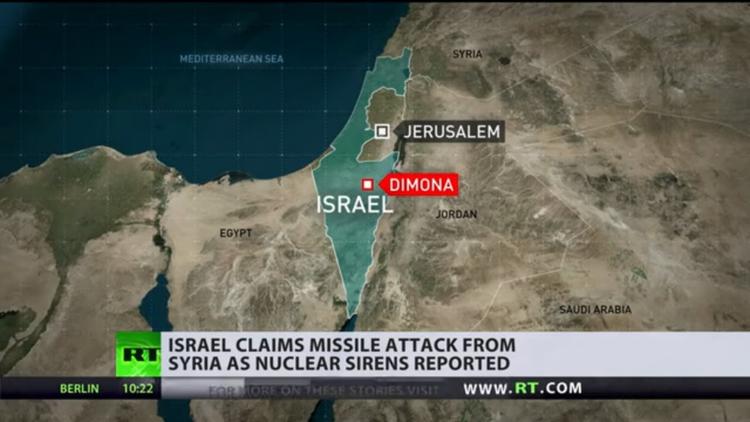 Ann Arbor (Informed Comment) – The Israeli site i24 reports that on early Thursday morning, a Syrian missile slammed into the desert very near to the Israeli nuclear reactor at Dimona, which Israeli authorities have used to produce an arsenal of an estimated two hundred nuclear bombs.

The Israeli military insists that the incident occurred when Syria fired SA-5 missiles from its Russia-supplied anti-aircraft battery at Israeli fighter jets striking targets near Damascus, and one of them overshot its target, landing on Israeli territory. Other observers suspect that the strike was deliberate.

The Israeli Air Force bombed the battery in response. Syria says the attack wounded four Syrian soldiers, and the Syrian Observatory for Human Rights says one Syrian officer was killed.

The S-200 surface to air missile (SAM) battery is termed by NATO the SA-5 Gammon. It is an ancient Soviet system that Syria purchased in the 1980s, and Damascus seems only to have a couple of such batteries left.

Observers were shocked that a missile with that sort of firepower could penetrate Israel’s air defenses and land near the highly sensitive Dimona site.

Had it hit closer to the nuclear reactor there could have been a release of radioactive material. Even a 25 kiloton warhead could throw up radioactive fallout from nuclear waste cooling ponds and other repositories in the vicinity of the plant. Moreover, a huge explosion of this sort could set the stage for a meltdown, as at Chernobyl.

Avigdor Lieberman, leader of the right wing Yisrael Beitenu party favored by the some one million Israelis who emigrated during the past two decades from the former Soviet bloc, put the blame for the near tragedy squarely on caretaker Prime Minister Binyamin Netanyahu. He said that the prime minister is preoccupied by his personal problems (he is being tried for corruption) and is paying no attention to the security of Israel, which is why a surface to air missile could so egregiously violate Israeli sovereignty.

Netanyahu has so far been unable to form a government, which would require putting together a coalition of parties with 61 seats in the 100-member parliament or Knesset. Lieberman says he refuses to sit in a Netanyahu government any longer. Netanyahu is willing to work with ultra-Orthodox religious parties, and recently has been playing footsie with the Palestinian-Israeli Muslim Brotherhood, whereas Lieberman and his party are diehard, militant secularists.

The missile incident underlines how dangerous nuclear power plants are, especially in the midst of a war zone. Ironically, Israel, which started the Middle East arms race, is always going on about the dangers of Iran’s civilian nuclear enrichment program, aimed at fueling its nuclear power plant at Bushehr, when it is Israel that actually built a substantial arsenal of nuclear warheads Iran has none, unlike the countries in its general neighborhood– Pakistan, India, China, the Russian Federation, and Israel itself.

Iran signed a nuclear deal in 2015 prohibiting it from enriching above 3.6 percent, and was observing its obligations until 2018, when Trump (urged on by Netanyahu in Israel and the Saudis) breached the accord and slapped a financial and economic blockade on Iran. Iran is now substantially out of compliance, though there is no evidence that it wants or could build a bomb.

Netanyahu is on his way to the annual conference of the American Israel Public Affairs Committee, the gargantuan pro-Israel lobby. While in Washington he will lobby the Biden administration and Congress to avoid reentering the 2015 Iran deal. Netanyahu uses the Iran bogeyman to attempt to take attention away from his corruption trial and from his ongoing colonization of the Palestinian West Bank.