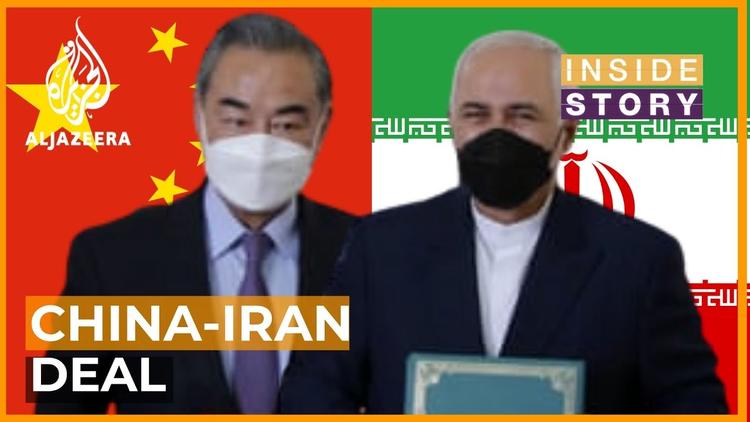 Beijing has inked a sweeping 25-year investment deal with Iran that could see China’s economic, political, and military influence there and across the Middle East expand.

( RFE/RL) – China and Iran signed the expansive deal during a ceremony in Tehran on March 27 between their respective foreign ministers, Mohammad Javad Zarif and Wang Yi. The agreement, in which Iran offered a steady supply of oil in exchange for Chinese investment under a vast economic and security accord, capped off a two-day visit that reflects Beijing’s growing desire to play a defining role in the region.

“China firmly supports Iran in safeguarding its state sovereignty and national dignity,” Wang said during a meeting with Iranian President Hassan Rohani before calling on the United States to drop its sanctions against Tehran and “remove its long arm of jurisdictional measures that have been aimed at China, among others.”

China became a lifeline for Iran’s economy and ties between Beijing and Iranian political leaders have warmed in recent years, as both have grappled with intensified diplomatic and economic confrontations with the West.

Former U.S. President Donald Trump’s administration pursued a policy of “maximum pressure” on Tehran over the latter’s nuclear and missile programs after withdrawing unilaterally from a 2015 nuclear agreement between Tehran and six world powers, including China. His successor, President Joe Biden, has kept those tough policies in place while also signaling a readiness to revive the so-called Joint Comprehensive Plan of Action (JCPOA).

While the Chinese deal with Iran is about furthering Beijing’s regional and global ambitions as a leading power, they also undercut Washington’s efforts to keep Iran isolated and better position Beijing ahead of any future nuclear negotiations regarding Iran.

“China wants to show that it is indispensable in solving some of the world’s thorniest problems,” Daniel Markey, a professor at Johns Hopkins University and the author of China’s Western Horizon, told RFE/RL. “Beijing is looking to portray itself as an evenhanded broker, while painting the United States as the more problematic global player.”

Decades And Hundreds Of Billions

Neither the Iranian nor the Chinese government gave specifics about the agreement during the signing, but a leaked draft obtained by Western newspapers in July pointed to large investments in Iranian infrastructure.

It has become impossible to tell the biggest stories shaping Eurasia without considering China’s resurgent influence in local business, politics, security, and culture.

China In Eurasia is the new monthly newsletter by correspondent Reid Standish in which he builds on local reporting from RFE/RL’s journalists across Eurasia to give you unique insights into Beijing’s ambitions. It’s sent on the first Wednesday of each month.

According to The New York Times, the draft covered $400 billion worth of Chinese investments in exchange for a steady supply of discounted oil to fuel China’s economy, although a draft seen by RFE/RL does not specify the amount of the deal.* Those investments would focus on energy and high-tech sectors as well as plans for other fields such as telecommunications, ports, railways, and health care, while also promoting Iran’s role in Chinese leader Xi Jinping’s signature foreign policy project, the Belt and Road Initiative, over the next quarter century.

The leaked draft also reportedly called for deepening military cooperation, including joint training and exercises, as well as intelligence sharing.

Iranian Supreme Leader Ayatollah Ali Khamenei has publicly backed the deal, which was said to have been proposed by Xi during a January 2016 trip to Iran.

But the deal has been met with criticism inside Iran that officials are hiding details amid fears that Tehran may be giving too much and selling off the country’s resources to Beijing.

After last year’s leak of the draft agreement, Iranians were skeptical and lashed out on social media, with many urging the government not to sign the deal.

In August, RFE/RL’s Radio Farda quoted many ordinary Iranians saying they were worried about the long-term implications of the ambiguous deal and that it would not benefit the country.

Critics have cited previous Chinese investment projects that have left countries in Africa and Asia indebted and ultimately beholden to Beijing and Chinese firms.

Beyond internal pushback, it is also not immediately clear how much of the agreement can be implemented with U.S. financial sanctions reimposed after the JCPOA withdrawal limiting how much business Chinese entities can conduct in Iran.

Delivering On The Deal

It also remains to be seen how many of the ambitious projects detailed in the agreement will come to fruition.

Should the nuclear agreement remain stalled or worse, Chinese firms could face secondary sanctions from Washington. Beijing also has a mixed track record in Iran when it comes to executing large projects.

China National Petroleum Corporation (CNPC), the state-owned oil and gas company, signed a contract to develop Iran’s South Azadegan oil field in 2009 after a Japanese firm pulled out. But Tehran ultimately ended the arrangement due to alleged underperformance and delays.

CNPC also inked multibillion-dollar contracts to develop a gas field, but the effort was abandoned after numerous delays.

“Signing an agreement is one thing; its materialization is quite another,” said Vaez. “China’s track record indicates that it often overpromises but underdelivers to Iran.”

‘A Friend for Hard Times’

Despite lingering concerns over the controversial deal signed with China, Beijing has offered Tehran a vital economic and political lifeline.

While Xi first proposed the strategic investment deal back in 2016, negotiations moved slowly.

Tehran signing the JCPOA nearly six years ago and reaching a deal with Washington to ease sanctions on its economy opened the door for European companies, who courted Iran with investments and plans to develop oil and gas fields.

But the Trump administration’s withdrawal from the deal and ensuing sanctions forced European companies to leave, leading Tehran to look east to China once again.

After signing the deal with Wang, Zarif said that “China is a friend for hard times,” referring to the economic and diplomatic support that Beijing has provided in recent years.

As the Biden administration looks to revive nuclear talks with Iran since taking over in January, Chinese support will be crucial for Tehran.

U.S. officials say that steps can be taken to bring Iran back into compliance with the terms of the agreement while the United States gradually lifts sanctions, but Tehran insists those penalties be lifted before any negotiations resume.

While calling for a return to the nuclear deal, China has so far backed Iran and demanded that the United States act first to return to the agreement by lifting sanctions that have strangled Iran’s economy and its currency.

John Calabrese, an expert on China-Iran relations at The Middle East Institute, a Washington-based think tank, said he thinks Beijing is looking to preserve the JCPOA and prevent Iran from developing a nuclear weapons program. He warned that such a program could lead to further regional instability and jeopardize Beijing’s diplomatic inroads in the Middle East, where “Chinese stakes in energy and other economic sectors have grown significantly.”

China continues to play a growing role in the Middle East.

Prior to his visit to Iran, Wang visited Saudi Arabia, Tehran’s main rival, and was warmly received in Riyadh. The Chinese foreign minister also visited Turkey and the United Arab Emirates, with additional stops in Bahrain and Oman.

Beijing has long avoided taking sides in conflicts in the Middle East, and Wang has offered China’s diplomatic capital to be a “peace broker” in the region. At a press conference at the annual National People’s Congress on March 8, Wang talked up Beijing’s deepening ties with the Arab world and said a host of agreements heralded “a new chapter” of Sino-Arab relations.

Calabrese, who is also an assistant professor at American University, said that given China’s diverse ties in the region and ambitions for the Middle East, it will be treading cautiously following this month’s deal not to alarm Saudi Arabia and the United Arab Emirates, Iran’s regional rivals.

Moving forward, he said, Beijing is positioning itself to play a more central role in reviving the Iran nuclear agreement and de-escalating tensions between powers in the Middle East, which could be a major diplomatic win for China.

“If that is the case and [it] bears fruit, then Beijing comes out stronger and [looks] stronger all around,” Calabrese said.

*CLARIFICATION: This article was amended to clarify uncertainty over the reported $400 billion figure of the investment deal. A draft of the agreement seen by RFE/RL does not list an amount for the 25-year pact.

Reid Standish is a correspondent for RFE/RL focused on China in Eurasia. He previously worked for Foreign Policy magazine in Washington and Moscow and has reported across Europe and Central Asia for The Atlantic, The Washington Post, and Politico Europe.

Al Jazeera English: “What is behind China and Iran’s ‘strategic’ deal? | Inside Story”