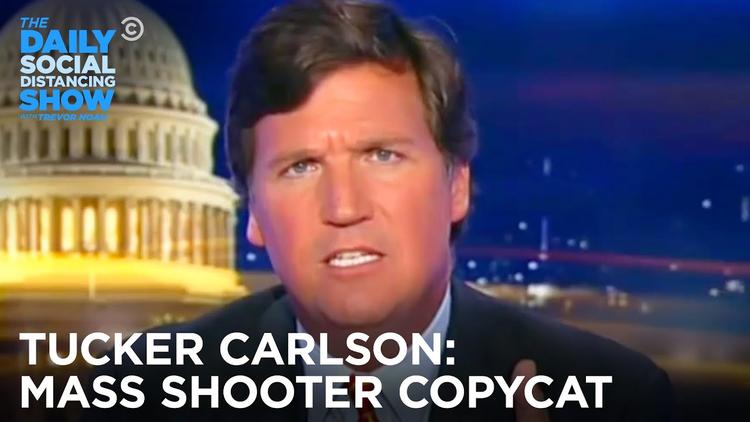 Ann Arbor (Informed Comment) – Grand Dragon Tucker Carlson went on another Fox News show to push his streaming program, and while there was struck with diarrhea of the larynx, oozing amid loud excretions a hateful farrago of antisemitic white supremacy. He openly embraced the tin foil hat conspiracy theory of “replacement,” the notion that sinister forces (often alleged to be Jewish) were deliberately swamping the US with immigrants so as to replace hard-to-control free white people with docile, poorly paid brown immigrants.

The Neo-Nazis who marched in Charlottesville, Va. in 2017 chanted “Jews will not replace us.” The mass shooter at the Tree of Life Synagogue in Pittsburgh on October 27, 2018, carried out his grisly murders of Jews because he believed in replacement theory.

Tucker blamed “the Democratic Party” for the alleged replacement scheme. Since over 70% of Jews vote Democratic, this diction can be seen as a dog whistle. Jewish civil rights groups have called for Carlson to be fired.

Studies show that immigrants don’t take jobs from locally-born Americans. Rather, they create jobs. Moreover, immigrants are associated with increased economic growth, so everyone gets better off, as even the conservative American Enterprise Institute argues.. The alternative to immigration is to decline, as the Japanese are doing. They’re expected to fall from 130 million to 80 million, and no one knows what that will look like economically or geopolitically, but it seems clear that they will shrink on both accounts if they let it happen. I don’t need to try to knock down the monstrous charge that Jewish Americans are in any way responsible for immigration policy, which was passed in 1965 by a largely WASP Congress and signed by Lyndon Johnson, a member of the Disciples of Christ.

Tucker Carlson’s own family could easily be targeted by the hate he spews. Despite his WASP name and demeanor, Carlson is descended on his mother’s side from Cesar Maurice Lombardi (1845-1919), a Catholic Swiss Italian who immigrated to the United States during the big wave of 1850-1924.

Let us just recall that in 1891 some of New Orleans’ most upstanding and prominent citizens participated in one of the largest mass lynchings in US history, of 11 Italian-Americans. Tucker Carlson’s great-great grandfather could have been among the victims if he had immigrated to that city.

Carlson works for Rupert Murdoch, the owner of Fox “news,” an Australian of “English, Irish and Scottish” ancestry, who immigrated to the United States and became a naturalized citizen. In fact, if it weren’t for the immigrant Murdoch, Carlson would have been fired long ago. His advertisers have fled because he is so horrible, and Murdoch, a multi-billionaire, carries him as a loss leader.

Carlson says that immigration violates the principle of “one person, one vote” and that his franchise is being diluted by the newcomers.

Well, I have an ancestor who fought in the Revolutionary War, and my Rudolph and Cole ancestors came to the US before Mr. Lombardi (in 1785 and 1830 respectively). So did Tucker Carlson’s family deprive mine of the franchise and dilute our vote? Hell, did Rupert Murdoch deprive me of the franchise by coming here from Melbourne and ruining American news the way he ruined Australian, with appeals to racism and climate change denial and illegal wiretapping and monopoly practices?

The multiple waves of immigrants who have come to the United States haven’t “diluted” the “white” vote because “whiteness” is made up. It hasn’t meant the same thing two decades in a row. Mr. Murdoch’s Irish line would have caused him to be called “black” in Boston in the 19th century.

As I pointed out to the odious Trump and Ann Coulter, founding father Ben Franklin only really thought the English were white:

That’s right, between a grandmother who was an Anderson and a mother who was a Lombardi, Carlson is not white by Ben Franklin’s definition. Every day, he dilutes the votes of the white English who have been driven into the minority by his like.

“I’m laughing because this is one of about 10 stories that I know you’ve covered where the government shows preference to people who have shown absolute contempt for our customs or laws or system itself. And they’re being treated better than American citizens.

Now, I know that the left and all the little gatekeepers on Twitter become literally hysterical. If you use the term replacement, if you suggest that the Democratic Party is trying to replace the current electorate, the voters now casting ballots with new people, more obedient voters from the third world, but they become hysterical, because that’s, that’s what’s happening actually.

Let’s just say it, that’s true. If look, if this was happening in your house, if you were in sixth grade, for example, without telling you, your kid, your parents adopted a bunch of new siblings, and gave them brand new bikes, and let them stay up later and help them with their homework and give them twice the allowance that they gave you.

You would say to your siblings, you know, I think we’re being replaced by kids that our parents love more. And it’d be kind of hard to argue against you, because look at the evidence. So this matters on a bunch of different levels. But on the most basic level, it’s a voting rights question.

In a democracy, one person equals one vote, if you change the population; you dilute the political power of the people who live there. So every time they import a new voter, I become disenfranchised as the current voter. So I don’t understand why you don’t understand this. I mean, everyone’s making a racial issue out of it. Oh, the, you know, white replacement?

No, no, this is a voting rights question. I have less political power, because they’re importing a brand new electorate, why should I sit back and take that? The power that I have, as an American guaranteed at birth is one man one vote, and they’re diluting it. No, they’re not allowed to do that. Why are we putting up with this?”