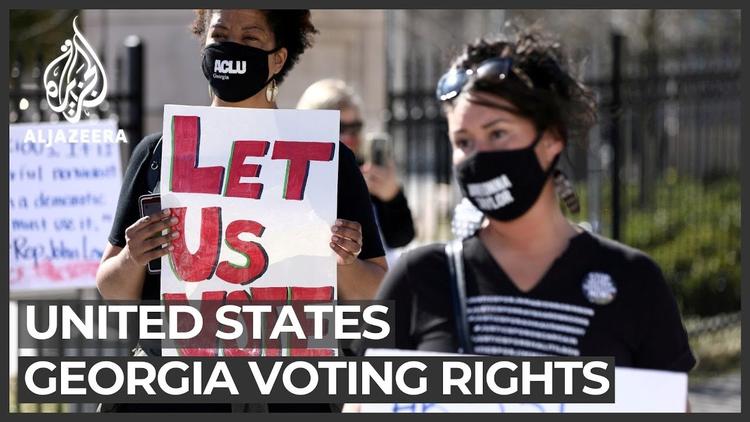 My faith teaches me to stand with the marginalized, whose voting rights are now under sustained assault.

The bill, formally SB 202, infamously makes it illegal to give people food or water while they’re waiting in line to cast their ballot. Providing food for the hungry and water for the thirsty are tenets of my Catholic faith.

So is standing with the marginalized. People don’t like to bring race into the conversation, but we have to be honest about how this bill harms people of color.

Georgia’s new law seems designed to make these lines longer — and to punish anyone who tries to make them more comfortable. This disproportionate impact on Black, Latino, Native, and Asian communities isn’t an accident. It’s the result of public policy.

Long lines make people less likely to vote in future elections. Republicans know this. That’s why these long lines are concentrated in areas where voters are more likely to cast their ballots for Democrats.

For many voters of color, the ballot box is how we advocate for our needs — and how we defend ourselves against legislation that might harm us. Make no mistake, this bill is about silencing voters of color and chipping away at our political power.

The new law also chops the period of time when voters can request an absentee ballot in half, imposes stricter voter ID requirements for mail-in voting, and slashes the number of locations where voters can cast a ballot.

More worryingly still, it strips control of the state’s election board from Georgia’s secretary of state — and gifts it instead to the Republican-controlled state legislature.

Last year, Georgia’s Republican Secretary of State Brad Raffensperger refused President Trump’s calls to “find” 11,000 more votes for the president, who lost the state. Now, by giving themselves power over the board, Georgia Republicans are plainly laying the groundwork to decertify any future election results they don’t like.

The GOP used to shout their commitment to religious freedom, the rights of businesses, and freedom of speech from rooftops. Now, with their wide net of voter suppression drawing the condemnation of faith groups as well as businesses, they’re stumbling over their own hypocrisy. When Georgia-based businesses like Coca-Cola and Delta spoke out against these new laws, Republicans tried to raise their taxes.

To top it all off, Republicans, including Senate Minority Leader Mitch McConnell, are now telling businesses to “stay out of politics.”

That’s rich coming from McConnell, a lifelong defender of corporate “speech” whose super PAC took in an unbelievable $475 million from corporations last year alone. It’s like if businesses do anything other than write checks, Republicans cry “cancel culture.” Give me a break.

GOP lawmakers are pushing hundreds of bills like Georgia’s in nearly every state in the country. These coordinated attacks on voting rights will inevitably leave poor people and people of color vulnerable to harmful public policy.

As a Catholic, I’m deeply offended by this assault on our democracy. No matter what your faith is, you should be, too.