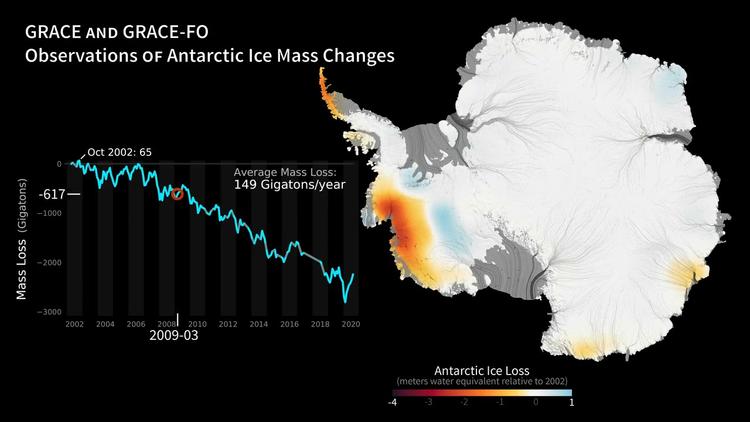 Ann Arbor (Informed Comment) – A new article in Geophysical Research Letters found that four times as much of the Antarctic ices shelves would melt under a scenario where we heat the earth by 7.2 degrees F. (4 degrees C.) as opposed to the current Paris Climate Treaty goals of 1.5 degrees C. or at most 2 degrees C. So this is not a serial progression, like 1, 2, 3, 4. It is 1, 2, 4, 8. Double the amount of extra warming and you get four times the destabilization of ice shelves.

The paper, by Ellen Gilbert and Christoph Kittel, “Surface Melt and Runoff on Antarctic Ice Shelves at 1.5° C, 2° C and 4° C of Future Warming,” did a computer simulation for each scenario with regard to the continent’s surface mass balance (whether the ice shelves are gaining or losing ice on the surface). They discovered that increased global heating will produce meltwater, which will speed up the fracturing of the ice shelves– causing them to crack and disintegrate.

In other words, by driving gasoline cars and producing heat and electricity with coal, we are heating the atmosphere with greenhouse gas emissions, which in turn is creating rivers in the ice shelves, which will break them up.

Ella Gilbert issued a statement saying, “Ice shelves are important buffers preventing glaciers on land from flowing freely into the ocean and contributing to sea level rise. When they collapse, it’s like a giant cork being removed from a bottle, allowing unimaginable amounts of water from glaciers to pour into the sea.”

I have to say that at the moment we are on track for the 7.2 degrees F. increase. That may not sound like so much, but remember that it is an average increase of the earth’s surface temperature, including the cold oceans and mountains. Any particular place could see a much greater increase in temperature– 20 or 30 degrees F. Even with the pandemic slowdown, we put extra carbon dioxide into the atmosphere last year, bringing it to 412.5 parts per million, something not see for three million years, when the whole world was tropical and sea level was 75 to 90 feet higher than today.

Antarctic has two kinds of ice shelves. Some are already in the Pacific, and their melting won’t change anything, just as ice cubes in a glass of water don’t cause the glass to overflow when they melt. They’re already in the water.

But then there are ice shelves over the Antarctic land mass. They are not in danger (any time soon) of sliding into the ocean themselves. But some of these land based ice shelves are the main barriers keeping glaciers from advancing into the sea. They need to be firm to do so. I once visited the Portage Glacier near Anchorage, and was amazed at how it moved, almost like a fairy tale giant. Some glaciers are so huge that if they fall into the sea, just one of them could cause a ten foot sea level rise. That would be deadly to Miami, New York, New Orleans and other coastal cities. So the fracturing of the ice shelves holding back the glaciers could allow those bad boys to advance into the ocean.

At 7.2 degrees F., some 34 percent of Antarctica’s ice shelves would be destabilized.