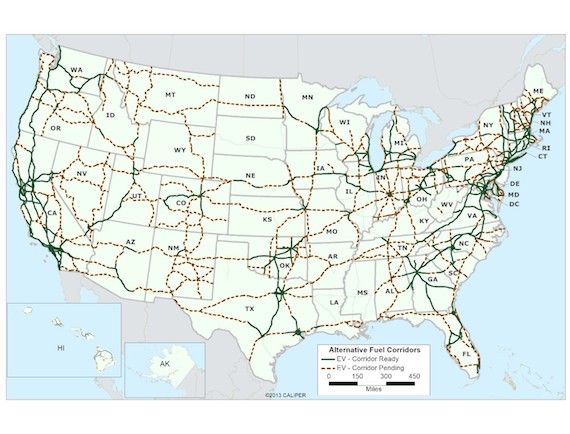 Ann Arbor (Informed Comment) – The White House issued a fact sheet Thursday on how President Biden intends to move the US vehicle fleet to electric in short order, using money already appropriated for his jobs plan.

Biden is ahead of world trends in his ambitions. The UN’s International Energy Agency predicts that the current world total of electric vehicles of 11 million could increase some 21 times over the next decade to 230 million if governments promote EVs. Things could go even faster than that. It takes about 14 years to turn over the existing fleet, and if more states follow California in banning sales of new internal combustion cars after a certain date, the turn-over rate will ensure a greening of the national fleet.

Moreover, the automobile companies themselves are planning for the end of gasoline cars. Volkswagen and Audi have dumped any further R&D for internal combustion engines and expect 70% of new car sales to be electric by 2030.

Studies show that anxiety about charging electric cars is one of the impediments to their adoption. Personally, I think this is silly. The average automobile trip is like 5 miles and the newer models of electric cars mostly get above 200 miles on a charge. I had a Chevy Volt for a while, which had limited range, and never came close to using up the charge. Still, it is also true that Tesla owners are particularly satisfied when it comes to fast charging states, which Elon Musk has sited all over the country. So President Biden is going to give all American drivers the Tesla charging experience.

His American Jobs Plan includes $15 billion to build a national string of half a million charging stations. The federal government will partner with state and local government as well as the private sector to get charging stations into apartment buildings and public parking as well as in stations along the highways. Making sure that apartment dwellers can charge their electric vehicles on site is important to greater adoption. I used to just charge my Volt in the garage, but people in apartments don’t have that opportunity. The White House points out that the installation and maintenance of charging stations will create jobs.

Secretary of Transportation Pete Buttigieg is also busy, partnering with states and local government to designate alternative fuels transportation corridors. Some of these concern the use of biofuels or natural gas, which don’t interest me much because the former are not really sustainable (we need to grow food not just auto fuel) and the latter is still a fossil fuel even if it burns more cleanly than the others. But, the Federal Highway Administration has designated purely electric-vehicle corridors on 59,000 miles of highways in 48 states plus Washington, DC. (The South Dakota and Mississippi state governments seem to be in the death grip of Big Oil, so have no such designations, but even they will get aboard in due time.) See the map above.

The government will also fund research and development on fast charging stations. Biden is offering $10 million for research to reduce the cost of the chargers. And $20 million is on offer to communities who can come up with new ways of deploying electric vehicles for community purposes.

The federal government itself owns some 700,000 vehicles, and Biden is going to switch this fleet to electric, striving for a “Zero Emission Vehicle” (ZEV) fleet. In a little over three months, the administration has acquired more electric vehicles than were bought in all of last year. Year on year, 2021 will see a tripling of such acquisitions. And those fast charging ports? They’re going to be installed at federal facilities.