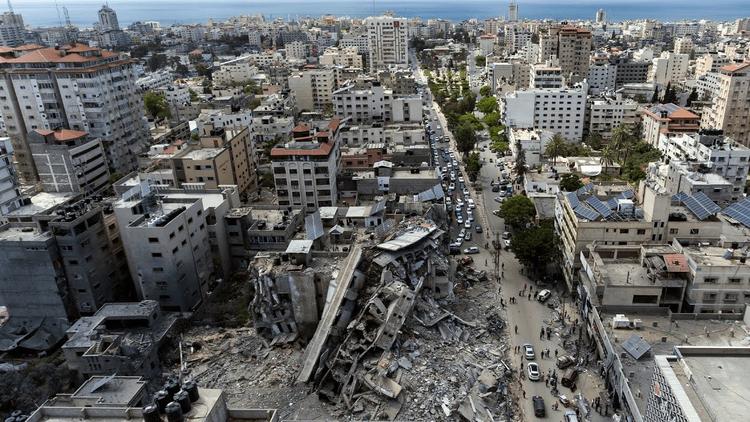 ( Middle East Monitor) – After 11 days of Israeli bombardment of the besieged Gaza Strip, an Egyptian-brokered ceasefire came into effect on Friday. Throughout the deadly attack on Gaza, Israeli occupation warplanes hit nine high-rise buildings, claiming they were being used as “military infrastructure”.

Among the buildings destroyed was the Al-Jalaa Tower, which housed the headquarters of Al Jazeera Network as well as the Associated Press in Gaza. These buildings also contained residential apartments, training centres, companies, clothing and cosmetics shops, media offices and other civilian enterprises. Palestinians have accused the Israeli occupation of targeting civilian structures in order to undermine systemic infrastructure and economic sectors in Gaza.

An Israeli pilot who participated in the aggression on the Gaza Strip publicly commented that blowing up residential blocks “was a way to vent the army’s frustration after they failed to stop the rockets firing from Gaza.” He spoke, along with many others, in an interview conducted by the private Israeli TV station Channel 12. Identified only by the first letter of his name, Major Pilot ‘D’ said he did not underestimate the intensity of the attacks he and his colleagues carried out, adding that they used tonnes of firepower and ammunition during the deadly assault.

D also discussed his and his colleagues’ thoughts during the attacks.

he said, adding: “We failed to stop the rocket fire and harm the leadership of the terrorist organisations, so we destroyed the towers.”

According to a statement issued by the Israeli army, Palestinian factions fired about 4,000 rockets towards southern Israel as well as central cities, including Tel Aviv, killing 12 Israelis and wounding hundreds.

After hearing the interviews on Channel 12, former Israeli pilot Yonatan Shapira commented that Israeli pilots who bombed residential towers in the Gaza Strip committed war crimes. In an interview with Al Jazeera, Shapira said that the actions of these pilots are the result of years of brainwashing at the hands of the Israeli army.

Shapira joined the Israeli army in 1993, resigning in 2003 during the Second Palestinian Intifada. He was arrested and imprisoned several times due to his work in solidarity with Palestinians. In an interview, Shapira told Andalou Agency that he had received an education which encouraged him to join the Israeli army to defend his people. However, during his service in the Israeli Air Force he realised issuing instructions to drop bombs on civilians was a “terrorist act”. The former pilot criticizsd the Israeli media and education system, pointing out that Israelis are being brainwashed, and that Israeli children are brought up in a militaristic Zionist educational system.

Engineer Nazi Sarhan, undersecretary of the Minister of Public Works and Housing in the Gaza Strip, confirmed that nearly 1,800 housing units were completely destroyed by Israel’s bombing campaign, while the number of partially damaged housing units reached 16,800.

“The financial losses of the demolition of buildings and residential facilities amount to $150 million, and these estimates are preliminary. We need $350 million to rebuild the housing sector, which suffered heavy losses during these latest aggressions,” he added.

Some analysis and political experts have called this round of escalation an “assault on Gaza’s towers.” They explain that Israel seeks to demonstrate dominance over the resistance by increasing the “costs on the popular support for the resistance”, forcing it to retreat and accept “a lull without price”.

However, as the resistance has expanded its “circle of fire” to include essential targets within Tel Aviv, the equation is different this time.

Israeli forces targeted towers and residential buildings, displacing inhabitants and causing destruction to water and electricity infrastructure, which are all actions that constitute war crimes under international law.

Through this policy, which falls within the framework of internationally prohibited acts of revenge, Israel aims to terrorise and intimidate peaceful civilians, casting them into the furnace of violent confrontation to manufacture a major humanitarian crisis which it can use as a point of leverage to pressure the resistance.

This round of bombing began when occupation forces assaulted Palestinians in occupied Jerusalem, causing tensions to spill over across the occupied territories and within Israel. The resistance responded.

Israel now wants to make sure the Palestinian resistance can never make such a move again.

Wafa Aludaini is a Gaza based journalist.

The Telegraph: “Drone captures scale of Gaza City destruction from above following the ceasefire deal”