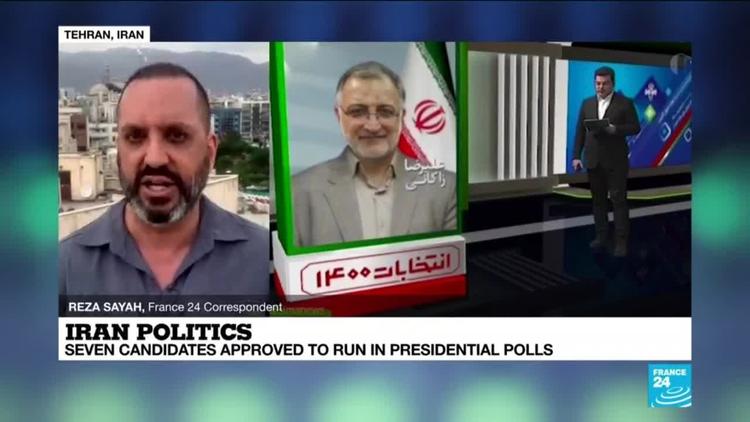 Oxford, U.K (Special to Informed Comment) – Although Iran is one of the few countries in the Middle East that has regular presidential, parliamentary and local council elections, those elections are far from free and fair when judged by the standards of advanced democracies. The June, 2021 polls will be even more flawed, in large part because powerful right wing figures have determined to exclude other candidates even more extensively in the past. But the United States is also partly to blame.

In 2013, the voters had turned to a moderate and centrist candidate, Hasan Rouhani, who won in the first round of the election. Rouhani promised a more open society at home and the resolution of the nuclear dispute with the West. As the result of the energetic efforts of Iranian Foreign Minister Mohammad Javad Zarif, and President Obama’s decision to recognize Iran’s right to enrich uranium for peaceful purposes, the landmark nuclear deal was signed. When Zarif returned to Tehran after having signed that agreement, there were nationwide celebrations and many people went to the airport and carried Zarif on their shoulders.

The deal meant that Iran’s nuclear activities became open to IAEA inspections and Iran adopted the provisions of the Additional Protocol. Consequently, the fear of Iran producing an atomic weapon was removed. The lifting of the sanctions meant that the Iranian economy experienced a period of rapid growth and Iran placed billions of dollars of orders for civilian aircraft and for the development of its oil, gas and petrochemical industries.

Unfortunately, President Trump’s withdrawal from the nuclear deal and imposition of a vast array of illegal sanctions on Iran meant that the Iranian economy went into a nosedive, and the latest chapter of Iranians’ hope of rapprochement with the West collapsed. Many Iranians felt cheated and betrayed, and although Rouhani and Zarif were initially very popular, economic hardships, the banning of Iranian visitors to the United States, and Pompeo’s relentless campaign of the demonization of Iranians turned the people against the moderates.

This time, 590 candidates, including 40 women, registered for election on June 18th, but all of them were eliminated with the exception of seven. Apart from Ahmadinejad, other prominent candidates who were eliminated included Ali Larijani who had served as Majles speaker for 12 years, and was also the secretary of the Supreme National Security Council and Iran’s chief nuclear negotiator during the first round of negotiations with the EU-Three.

There are a number of reasons why Iranian voters cannot vote for their favored candidates. The first reason is that the most basic pillar of any democratic system is freedom of expression and assembly, both of which are lacking to a large extent in Iran. Freedom of speech is very restricted and politicians and even journalists often get into serious trouble, including disqualification, jailing and worse, by expressing views that are contrary to the narrow range of views tolerated by the leading figures of the regime.

Even presidents have been censored when they got out of line, as was the case with the first president of the Islamic Republic Abol-Hasan Bani-Sadr who was impeached for opposing Ayatollah Khomeini, was forced to flee and has lived ever since in exile in France. Mir-Hossein Mousavi, former Prime Minister and presidential candidate in the landmark 2009 presidential election that led to nationwide protests and the birth of the Green Movement, has been under house arrest ever since.

Former Reformist President Mohammad Khatami who won the election by the largest margin in post-revolutionary elections has been banned from appearing in public or engaging in any political activity since 2009 when he too supported the Green Movement.

Mahmud Ahmadinejad, the two-term president, was also censored by Ayatollah Khamenei when he opposed Khamenei’s interference in his government by reinstituting the minister of intelligence whom Ahmadinejad had dismissed. The Guardian Council rejected his qualifications when he tried to run for president in the 2017 presidential election and again in the 2021 election.

The second reason why Iran cannot be regarded as a functioning democracy is the lack of an independent judiciary that can enforce the law regardless of political considerations. The current judiciary in Iran is one of the weakest links in the Iranian establishment. Not only is it corrupt and severely politicized, it is clear that many dual nationals that are tried and jailed by the judiciary or by the even the more objectionable revolutionary courts affiliated with the Islamic Revolution Guards Corps (IRGC) are in practice hostages that are detained as bargaining chips for deals with foreign governments.

The third and the most obvious factor that undermines democracy and fair elections in Iran is the undemocratic role played by the Guardian Council that is in charge of approving the credentials of the candidates. The Guardian Council has 12 members, six of whom are senior clerics appointed directly by Ayatollah Khamenei, and the other six are chosen by the judiciary, whose head is also appointed by Ayatollah Khamenei and answerable to him.

Ahmad Jannati, the 94-year old chairman of the Guardian Council who has been a member of the Guardian Council since 1980 when he was appointed to the post by the late Ayatollah Khomeini, and has been its chairman since 1988, is one of the most rightwing elements in the Islamic Republic. He also occupies the prominent post of the Chairman of the Assembly of Experts, the body charged with choosing the next Clerical (Supreme) leader. By selecting a list of candidates that particularly favors Ebrahim Raisi, the current Head of the Judiciary (Chief Justice), Jannati is practically ensuring Ra’isi’s promotion to the post of Supreme Leader after 82-year old Ayatollah Khamenei’s death.

In all former elections, the Guardian Council made sure to include the names of the candidates from different political groups in Iran, mainly divided into Reformist, Centrist and Fundamentalist (that call themselves Principlists). Therefore, although the voters had a narrow choice of candidates who had been vetted and approved by the rightwing Guardian Council, at least they could choose between the bad and the worse.

In fact, an amazing feature of Iran’s presidential election has been that power has been passed round between one of those three groups and usually when one main party was in power it was followed by a president belonging to one of the other camps. After Khomeini’s death when the then President Ali Khamenei who belonged to the more conservative wing was chosen as the Clerical Leader, Hashemi-Rafsanjani who portrayed himself as “the commander of reconstruction” and belonged to the centrist or moderate wing of the establishment was elected president.

In 1997 after Hashemi-Rafsanjani, Mohammad Khatami who was the leader of the Reformist Movement asked Khamenei if he would be allowed to run. Wanting to provide a semblance of competition for the establishment candidate Ali Akbar Nateq-Nuri, Khamenei agreed with Khatami’s candidacy. Once people had a real choice between a hand-picked conservative figure and one who promised to provide greater freedoms at home and better relations with the world, they flocked to him and he won in a landslide with more than 70 per cent of the votes. He lived up to his promises and introduced what could be described as a reformist revolution in Iran and extended the hand of friendship to the West with his Dialogue of Civilizations.

Predictably, Khatami was opposed by the rightwing opponents in Iran who attacked his reformist policies, and unfortunately his approaches to the West were repulsed. He expressed his condolences to “the great American people” following the terrorist attacks on 9/11, and his government even helped the United States in its war against the Taliban by persuading the Northern Alliance to cooperate with the Americans. However, the Neoconservatives in the U.S. administration who have always been worried about any rapprochement between Iran and the United States, responded to his friendly gesture by adopting the “dual containment” policy against both Iraq and its enemy Iran, and they even included Iran in the so-called “Axis of Evil”.

The humiliating failure of Khatami’s policy of rapprochement with the West led the voters to move from one extreme to the other, and elect the radical candidate Mahmud Ahmadinejad. The controversial 2009 presidential election, which many Iranians regarded as fraudulent, and the emergence of the Green Movement led to the voters’ disenchantment with Ahmadinejad. As we have seen, his successor, Rouhani, was made to look like a fool when Trump reneged on Western promises of sanction relief, casting doubt in the electorate on the effectiveness of such centrists.

The hard liners have taken advantage of this skeptical mood in the public, as detailed above, to simply sideline anyone outside their tight clique. Another prominent figure who has been rejected is the current First Vice-President Eshaq Jahagiri who was one of the candidates of the Reformist group. All Reformist groups had put Mohammad Javad Zarif’s name at the top of their list, but the leaking of the tape of three hours of his conversation with the Iranian economist Saeed Leylaz in which he talks disparagingly of the excessive power of the IRGC over domestic and foreign policy, and reveals Russia’s destructive role in the nuclear talks put an end to his chances.

The seven candidates who have been approved include Ebrahim Raisi, the hard-line head of the judiciary who was a member of a committee that approved the execution of thousands of jailed members of Mojahedin-e Khalq on Khomeini’s order. So, from the chief executioner and the chief assassin he became the Head of the Judiciary and most probably will be the next president

Mohsen Rezai, the former commander of the IRGC, who ran unsuccessfully in 2005, then again in 2009 and 2013, registered for the June election on May 15, the last day allowed, and was chosen as one of the seven candidates. Saeed Jalili, the hard-line former nuclear negotiator under Ahmadinejad is another approved candidate. Other candidates are minor and little-known conservatives, with the sole exception of Mohsen Mehralizadeh who is known as a Reformist but was not on the list of main candidates by the Reformist groups.

Although Iranian presidents are not the ultimate sources of power in Iran, it is quite wrong to dismiss them entirely. They are in charge of the extensive executive branch and can change the direction the country takes. There clearly was a great deal of difference between a hardliner like Ahmadinejad, a Reformer like Khatami and a Centrist such as Rouhani.

It seems that the next Iranian government will be headed by a radical, right-wing president in close alliance with the IRGC. The lack of any real competition means that the next presidential election is a sham and more an appointment of a pro-regime functionary than a real election. It is predicted that the level of public participation will be the lowest in the history of the Islamic Republic. So, the democratic element in Iranian politics will become even weaker.

Although most of the blame for this abysmal situation lies with the fundamentalist, clerical system in Iran, the move to the right can partly be blamed on former President Trump and his policies. If instead of withdrawing from the nuclear deal he had built on it and had brought Iran closer to the West, most probably someone like Zarif would be at the top of the list of candidates and would have had a good chance of winning. So, Trump did a great disservice to Iran, to the United States and to the cause of peace in the Middle East.