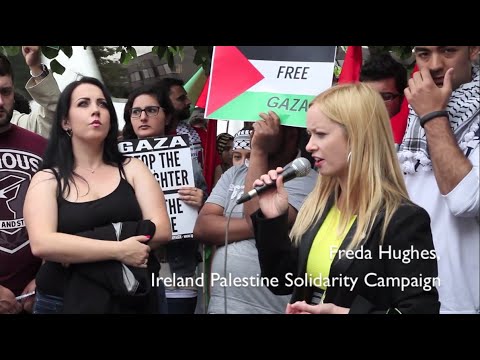 Ann Arbor (Informed Comment) – The recent Israeli assault on the Palestinians in Jerusalem and the West Bank, and the bombardment of Gaza, has stirred passions in the Irish Republic, where public opinion has swung around to be strongly in favor of Palestinian rights and critical of the Apartheid, Occupation government of Israel.

Rallies have been being held all over Ireland for Palestine during the past two weeks, and even on Friday, after the announcement of the cease-fire, some 23 protests were staged throughout the country. The leftist Sinn Fein has introduced a measure in parliament that will be voted on, on Tuesday, calling “on the government to adopt a resolution to take ‘all measures within its powers’ to seek ‘equal rights’ for people in Palestine,” according to the online thejournal.ie.

The 160-seat Irish parliament is dominated by three major parties, each of which won 30-odd seats in the 2020 election– the conservative Fine Gael, the center-right Fianna Fail, and the democratic socialist Sinn Fein. The Greens have 12 seats, and the far left Solidarity has 5.

Sinn Fein spokesman John Brady urged the other parties to support the motion, saying “The Dáil must send out an important message that the ongoing actions of the Israeli government towards the Palestinians is unacceptable to the Irish people.”

Passions in Ireland ran high even a couple of weeks ago as the Israeli bombing began. Deputy prime minister [Tanaiste] Leo Varadkar of the center-right Fine Gael Party had told parliament, as the conflict heated up in mid-May,

“Annexation, expulsion, plantation and the killing of civilians, deliberately or in terms of collateral damage, is not the behaviour of a democratic state in the 21st century and it is simply unacceptable that such a state or any state should behave in this way.”

So reported Daniel McConnell at the Irish Examiner.

The same report quoted member of parliament Mick Barry’s demand that the Israeli ambassador be expelled:

“The Irish State has sent observers to the scenes of the mass evictions in east Jerusalem. Do these actions go far enough? They do not. Is it enough to merely call in the ambassador? The ambassador is the representative of a state that is pursuing a policy of systemic racism. The ambassador should be expelled and I put it to the Tánaiste that this should also be Government policy.”

Barry is a member [Teachta Dála or TD] of the lower house of parliament from the small socialist Solidarity Coalition.

“Israel has reigned terror and murder on the people of Gaza. In eight days, over 200 people have been killed including 60 children, murdered for doing nothing, murdered because they’re Palestinian. The world is watching while the state of Israel conducts collective punishment against the Palestinian people of occupied lands . . . when is the right time to expel the Israeli ambassador to Ireland. If it’s not now Taoiseach [prime minister], when is the time?

This has been going on for generations where the Israeli government with impunity has murdered and caused terror to the Palestinian people. We in Ireland should know we have been occupied, brutalized by another oppressor. So when is the time to expel the Israeli ambassador and show solidarity to the world and Palestinian people.”

Kenny put his finger on the reason for which Israel is in such bad odor in Ireland. For many Irish viewing a conflict abroad, the question is, which side is playing the British Empire (which brutally occupied Ireland for 400 years), and which side is playing the oppressed Irish? Earlier in its history, Israel looked like the underdog, and had fought its own anti-colonial rebellion against Britain in the 1940s, and many Irish warmly supported it. Since 1977, as the Israeli right wing has become more dominant and its treatment of the militarily occupied Palestinians has started looking an awful lot like a long term colonization of the sort the Irish suffered from, Israel increasingly looks like it is playing the British Empire in this drama.

Barry further called for the lower house to again attempt to pass into law the Occupied Territories Bill that would prohibit importation into Ireland of the produce of Israeli squatter-settlements on Palestinian land in the West Bank.

The bill was passed by parliament in 2018 under a previous government but was opposed by the ruling party and blocked on the grounds that it was an opposition bill that would cost the treasury money.

The measure is opposed by the prime minister [Taoiseach] Micheál Martin of the conservative, Christian Democrat Fianna Fáil party on the grounds that it would contravene European Union law and prerogatives. Many of his backbenchers, however, are strong critics of Israel.

Not only Solidarity but also the Green Party is pressing for implementation of the Occupied Territories Bill.

Now it appears that the Irish parliament will vote on the question of expelling the Israeli ambassador this week, according to the Jerusalem Post. Many members of parliament in the Sinn Fein and Fianna Fail parties are also strong supporters of Palestinian rights, and will be joined by the Greens and Solidarity.

Despite the stance of many of his party colleagues, Taoiseach Martin is also opposed to expelling the Israeli ambassador, and likely could find ways to block the measure even if it is voted in. But that it has risen as an issue to the point where it is even being voted on tells you how incensed many Irish are about Israel’s actions.

Dublin Protests In Solidarity With People Of Gaza