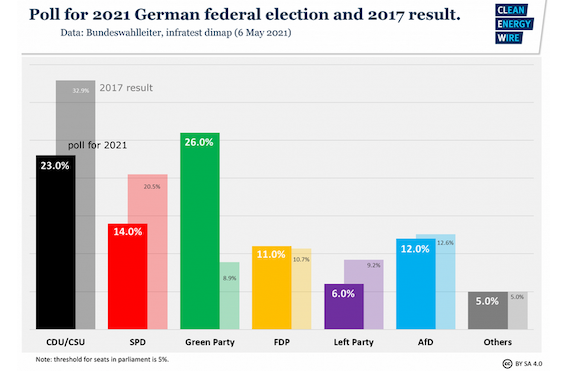 The co-leader of the German Greens, Annalena Baerbock, emphasised possibilities for closer cooperation between Germany and the U.S. on issues including climate action at a virtual event of the Atlantic Council. “We as Europeans and we as German Greens are not very far apart from the current U.S. administration,” Baerbock said.

The chancellor candidate highlighted the opportunity to create a ‘transatlantic green deal,’ thereby “investing in a future of carbon neutrality with a strong movement of social justice.” Baerbock also called for an end to the construction of the controversial Nord Stream 2 gas pipeline, which is to connect Russia and Germany, citing the security threat for Ukraine as the main reason.

Germany will head to the polls on 26 September to elect a new federal parliament and government. The Green Party has been leading national polls in recent days, surpassing the conservative CDU/CSU bloc and increasing its chances of providing the next chancellor to follow Angela Merkel.