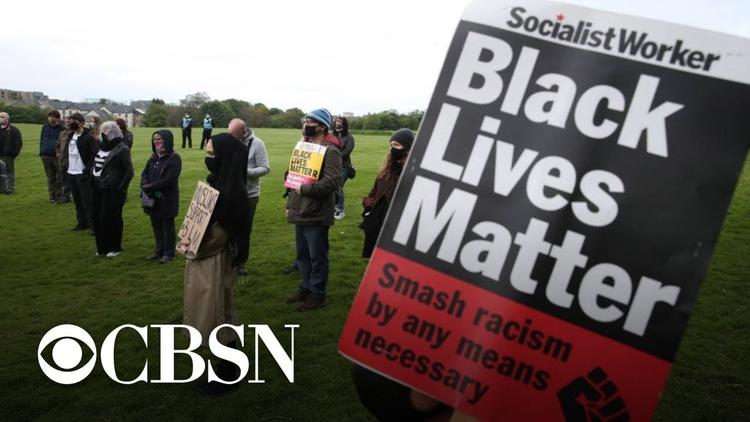 Ann Arbor (Informed Comment) – May 26 was the one-year anniversary of the murder of George Floyd by Minnesota police, and President Biden had the victim’s family to the White House, where they lobbied the president on police reform. George Floyd could not have imagined how he would become an international symbol of the victimization of the poor and the weak by authoritarian institutions. His example hit a special nerve among Palestinians.

Some observers have suggested that one of the reasons for the difference in the way the recent Israeli crackdown on the Palestinians was perceived in the U.S. this April and May as compared to past such episodes is that it took place in the wake of the killing of Mr. Floyd by police and subsequent protests. In the context of Black Lives Matter and the demand for an end to police brutality and an end to different treatment for minorities than for the white majority, Palestine looks different.

Most Americans have no idea that Israel is militarily occupying 5 million Palestinians, many of whose families it expelled from their homes in Israel proper in 1948. Some 70% of the Palestinians in Gaza were chased off their farms or out of their towns by militant Zionist militias in 1948. Hagana (the main Jewish paramilitary) even boasted that 75 percent of Palestinian flight was owing to its activities, in a document that was seen by Israeli historians in the Israeli archives, but then became unavailable. There had been over a million Palestinians in British Mandate Palestine. 720,000 of them were expelled by 500,000 European Jewish settlers allowed in by the British, who then erected Israel on 78% of the old Mandate.

But today’s problem is not a refugee problem. It is a problem stemming more from 1967, when Israel made an audacious grab for the Gaza Strip and the Palestinian West Bank. The civilian Palestinians who lived there had played no role in the 1967 Six Day War. They were not even areas awarded Israel in the toothless UN General Assembly partition plan of 1947. There had been no significant Jewish settlement of those areas in the first half of the twentieth century. It was pure land greed.

Although Israeli elites argued about what to do with the new territory, within five years the colonialists had won out and the government began backing Israeli colonies in Palestinian cities like al-Khalil (which the Israelis call Hebron). Israel invoked Ottoman-era laws on eminent domain to grab Palestinian farms and make them available as sites of apartment complexes for Israelis where no Palestinian is allowed. This colonization of Palestinian land violates the Fourth Geneva Convention on the treatment of occupied people and the UN Charter, which forbids a state to aggrandize itself with land seized violently from neighboring peoples. These international laws were enacted in a bid to stop a repeat of what Germany did to Poland in WW II, when it invaded and occupied Poland, expelled Poles and brought in ethnic Germans to take their place.

But today’s problem is not merely a colonialism problem, either. Palestinians are stateless. Israel will not allow them to have a state. They are not citizens of anything. They don’t have passports, just laissez-passer, which many governments won’t honor. They don’t have a right to their own property, because Israeli courts often back the Israeli state and Israeli squatters who steal that property. Palestinian courts cannot overrule such decisions. Palestinians are spied on. They are arbitrarily woken up in the middle of the night by Israeli military patrols. They are killed with impunity.

And here is the place where George Floyd and the Palestinians begin to meet. George Floyd was an American citizen. But his citizenship was not fully recognized by the Minneapolis police department. He was not treated like a citizen. A man’s knee was pressed down on his neck for over nine minutes, choking the life out of him. Among the general rights accorded to citizens by the state is access to oxygen. Mr. Floyd was not accorded that right. The death penalty was imposed on him for trying to pass a counterfeit $20 bill. His life was only worth $20.

Now, it is a general principle of U.S. law, affirmed by the Supreme Court in 1967, that Americans cannot be deprived of their citizenship. How that ruling was arrived at is very interesting in our context.

Congress had passed a 1940 Cold War law mandating that Americans lose their citizenship if they vote in the election of a foreign country.

This law was challenged in 1958 in Perez v. Brownell, but was upheld by a narrow 5-4 majority. In that case, Clemente Perez was a Texan of Mexican descent who moved to Mexico during WW II to avoid the draft, for which he never registered, and while there in the 1940s he voted in Mexican elections. His citizenship was revoked and SCOTUS agreed that the Department of Justice had acted properly.

Chief Justice Earl Warren dissented in this case. He wrote,

“To secure the inalienable rights of the individual, ‘Governments are instituted among Men, deriving their just powers from the consent of the governed.’ I do not believe the passage of time has lessened the truth of this proposition. It is basic to our form of government. This Government was born of its citizens, it maintains itself in a continuing relationship with them, and, in my judgment, it is without power to sever the relationship that gives rise to its existence. I cannot believe that a government conceived in the spirit of ours was established with power to take from the people their most basic right.

Citizenship is man’s basic right for it is nothing less than the right to have rights. Remove this priceless possession and there remains a stateless person, disgraced and degraded in the eyes of his countrymen. He has no lawful claim to protection from any nation, and no nation may assert rights on his behalf. His very existence is at the sufferance of the state within whose borders he happens to be. In this country the expatriate would presumably enjoy, at most, only the limited rights and privileges of aliens,5 and like the alien he might even be subject to deportation and thereby deprived of the right to assert any rights.6 This government was not established with power to decree this fate.”

Because of Warren’s dissent and the narrowness of the verdict, the 1940 law was tested again in 1967, in Afroyim v. Rusk.

Beys Afroyim was a Polish Jew who immigrated to the U.S. and got citizenship in 1926. In 1950, after the establishment of Israel, he moved there, and voted in the 1951 election for the Knesset or Israeli parliament. When he tried to renew his US passport, he was refused, and his U.S. citizenship was revoked by the State Department.

In Afroyim v. Rusk, the Supreme Court struck down the 1940 law and reversed Perez. Here is another place that George Floyd, the Israelis and the Palestinians come together. The main grounds on which the court argued in 1967 that an American’s citizenship cannot be taken away involuntarily was the 14th Amendment. That amendment established birthright citizenship and confirmed that African-American ex-slaves were U.S. citizens. (Slaves are not citizens, and so the legal status of the ex-slaves after Lincoln’s 1863 Emancipation Proclamation was brought into doubt in some quarters).

The court noted, the the first clause of the 14th Amendment is actually an amendment inserted by those senators fearful that attempts would be made to take citizenship away from African-Americans. It says, “All persons born or naturalized in the United States, and subject to the jurisdiction thereof, are citizens of the United States and of the state wherein they reside. No state shall make or enforce any law which shall abridge the privileges or immunities of citizens of the United States; nor shall any state deprive any person of life, liberty, or property, without due process of law; nor deny to any person within its jurisdiction the equal protection of the laws.”

“Senator Howard, who sponsored the Amendment in the Senate, thus explained the purpose of the clause: ‘It settles the great question of citizenship and removes all doubt as to what persons are or are not citizens of the United States. * * * We desired to put this question of citizenship and the rights of citizens * * * under the civil rights bill beyond the legislative power * * *…. This undeniable purpose of the Fourteenth Amendment to make citizenship of Negroes permanent and secure would be frustrated by holding that the Government can rob a citizen of his citizenship without his consent by simply proceeding to act under an implied general power to regulate foreign affairs or some other power generally granted.”

So African-Americans could not be expatriated. And neither, the court decided, could Beys Efroyim, regardless of whether he voted in an Israeli election.

As Chief Justice Warren had said of citizenship, “Remove this priceless possession and there remains a stateless person, disgraced and degraded in the eyes of his countrymen. He has no lawful claim to protection from any nation, and no nation may assert rights on his behalf. His very existence is at the sufferance of the state within whose borders he happens to be.”

So Senator Howard was trying to protect African-Americans from meeting this fate, of statelessness.

But there are ways of making people second-class citizens without taking away their passports. And that is what has been done to many African-Americans. That is what was done to George Floyd.

So, yes, the Palestinians have this in common with George Floyd. Neither of them was treated as a citizen would be. Palestinians do not have the right to have rights, in Warren’s phrase. They are stateless, disgraced and degraded, with no lawful claim to protection from any nation. George Floyd was not stateless. He had a lawful claim to protection from the American nation de jure, in the law. But de facto, he was deprived of it.

CBS News: “How the Black Lives Matter movement relates to the Israeli-Palestinian conflict”