Ann Arbor (Informed Comment) – Hugh Thomas and a team of Australian researchers have just published a groundbreaking article in the journal Antiquity describing their research into the mysterious “Rectangles” (mustatīl) dotting Northwest Arabia. This region lies due south of Israel-Palestine and Jordan.

The Rectangles date from roughly 7,500 years before present, making them 2,500 years older than Stonehenge and 2,800 years older than the Saqqara pyramid in Egypt. The archeologists have discovered about 1,000 of them, mostly from the air, but they have ground-surveyed some 39. The structures range from 90 feet long to 1,800 feet long. (A US football field is 360 feet long). 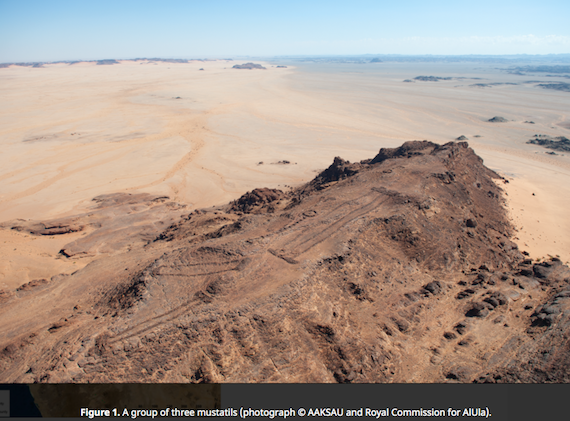 The Rectangles have been found in the Saudi districts of al-Ula and Khaybar. Al-Ula is in the vicinity of the ancient city of Hijr, which was already abandoned in the time of the Prophet Muhammad (d. 632), and which the Qur’an denounces as a center of polytheism: “The people of Hijr impugned the veracity of the prophets” (Al-Hijr 15:80). The Qur’an frequently asserts that pagan populations of the past met a devastating end. It may be that the hundreds of neolithic ruins (as well as more recent ones from the Nabataeans) suggested that this area had been pagan and met with the wrath of the one God. 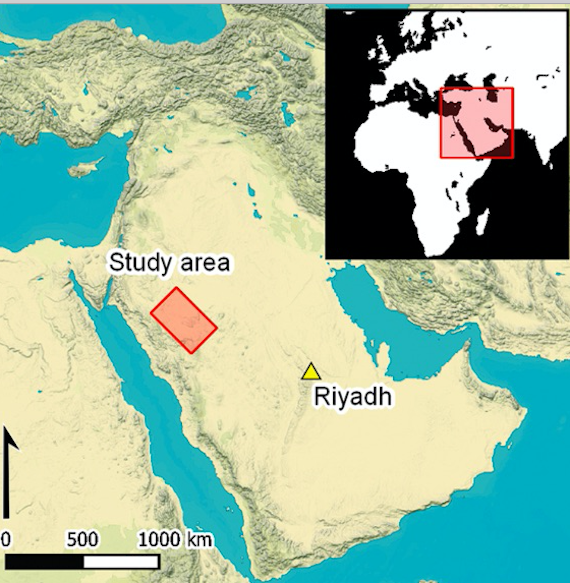 According to the later Muslim tradition, in the time of the Prophet, Khaybar had a substantial Jewish population with which the followers of Muhammad came into conflict.

That is, the people of this area demonstrated a religious genius that birthed one of our current world religions, accounting for a fourth of all human beings. But we are now finding that their religious genius extends into the Middle Holocene and that their massive works preceded Stonehenge, previously the largest Neolithic religious monument.

According to Thomas et al., the Rectangles are made up of a number of important features. These include “a head, courtyard, long walls, a base and, in some instances, a series of associated features including circular cells and orthostats [upright stones or slabs, i.e. monoliths]. They have a long open courtyard. The mustatīls are often grouped together, with as many as 20 in the same area.

Remains of cattle, gazelles and sheep and goats are found in the Rectangles. Mostly the remains are of cattle, and they are clustered around a standing stone or betyl. One of the horns from the cattle was carbon dated to the sixth millennium BC, that is, 7,000 years ago. At that time, the earth was a little warmer than the Holocene average, so Arabia was humid enough to support cattle, which need a lot of water. 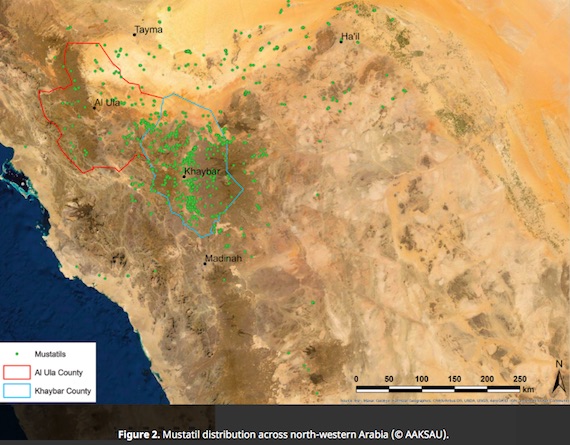 In historical times, the pre-Islamic Arabs worshiped gods and goddesses they believed inhabited featureless standing stones. This practice was denounced in the Qur’an’s chapter of The Table 5:90, “Believers, strong drink, gambling, [sacrificing on] stone altars, and divining arrows are but defilement from the work of Satan, so avoid them so that you will prosper.”

I discussed the conflict between Muhammad’s new religion, Islam, and preceding pagan practices in my book,

Thomas and his colleagues found no sign of human habitation in the Rectangles, so they seem to have been ritual sites for animal sacrifice. They write of the fauna or animal remains found there,

“A ritual function can be hypothesised for the mustatils based on the type and positioning of these faunal remains—an assertion strengthened by previous excavations at other mustatils in AlUla, which have revealed similar dates and assemblages (W. Abu-Azizeh pers. comm.). Similarly, charcoal recovered from a looted mustatil, located south of the Nefud Desert, has also produced a late sixth- to early fifth-millennium BC date, along with similar faunal remains (Groucutt et al. 2020). A ritual function for these structures is also suggested by their size and prominence in the landscape, as well as the low height of the long walls (0.3–0.5m) and narrow entranceways, which suggest that mustatils could not have functioned as animal pens. Moreover, none of the components of these features can plausibly be interpreted as the remains of permanent or seasonal occupation. Nor is there evidence to suggest that these structures were ever roofed.”

The narrow entranceway to the Rectangle and its length suggest to them that people entered single file and moved in a procession to the head. The orthostats or monoliths also suggest a religious purpose, since they have been found at Arabian sites where worship was carried out.

There is no other known assemblage of such structures for a spiritual purpose that is so early. It may be that Arabia not only gave the world Islam, but gave it, in addition, its first monumental ritual sites.