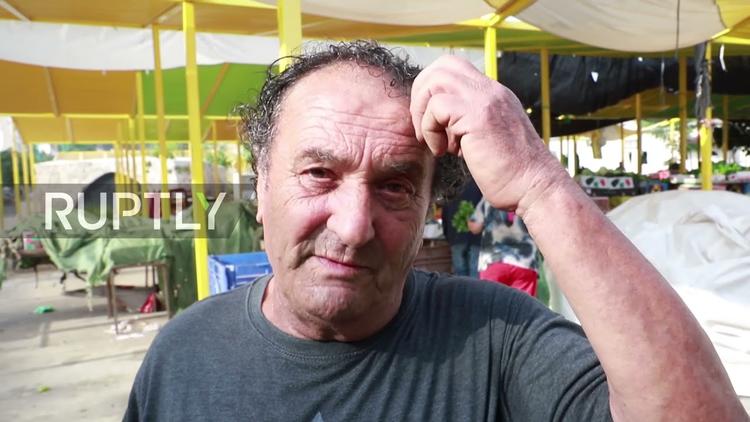 Ann Arbor (Informed Comment) – On Wednesday, Israeli caretaker Prime Minister Binyamin Netanyahu declared a state of emergency in Lod, a small city of 77,000 people just southeast of Tel Aviv, 30 percent of whom are Palestinian-Israelis (my term for them, on the model of “Italian-Americans”). It had witnessed street demonstrations and rock throwing, and threats of militant Israeli squatter militias to come back over the Green Line to attack them. A Palestinian-Israeli man was shot to death by an Israeli Jew. Palestinian-Israelis threw stones at Jewish houses and set fires at restaurants, synagogues, a museum and some parked cars, according to BBC Monitoring, which wrote,

“In an interview with Channel 12 news, the mayor of Lod called the situation in his city a “civil war” and urged the government to send in the army. Protests and confrontations with riot police were also reported in the mixed cities of Haifa and Jaffa, which is adjacent to Tel Aviv.”

In Ramlah, Jewish extremists threw stones at cars driven by Palestinian-Israelis and beat up one member of that community.

The big surprise of the past week in Israel has been the outbreak of protests and solidarity with the Palestinian cause on the part of the Palestinian-Israelis in the country’s mixed cities such as Lod, Ramla and Acre. Sometimes called the “Arabs of 1948,” these are persons of Palestinian heritage with Israeli citizenship who were not ethnically cleansed in israel’s war for independence, and who make of 20% of the Israeli population. The Center for Palestinian Information writes that Israeli police have been shocked and dismayed as the usually docile population has taken to the streets, throwing stones and in some cases setting fires, in several Israeli cities. They are protesting in solidarity with the Palestinians of Jerusalem, and more recently, Gaza.

Palestinian-Israelis went in some numbers to pray at the al-Aqsa Mosque in the past few days, in defiance of Israeli police, who set up barricades and tried to ban the services. They showed solidarity with the Jerusalem Palestinians (about a third of the population there) who are under threat of ethnic cleansing with some 139 facing imminent eviction from their homes in Sheikh Jarrah.

BBC Monitoring says that in the mixed city of Acre, protesters vandalized shops and set fire to a hotel and a Jewish-owned eatery. The mayor asked for border police to come in. Palestinian-Israeli political activists Bulus Nahhas and Hussain Asadi of the Acre Coalition List issued a statement that said, according to Arab 48,

“It is no secret to anyone that we are confronting difficult political conditions in the face of the brutal aggression launched by the Israeli government against our people in Gaza and the worshipers in the Al-Aqsa Mosque, and the attempts to Judaize the Sheikh Jarrah neighborhood in Jerusalem. It is our national and moral duty to stand in a dignified fashion with our people through organized collective protest against these brutal practices that no honorable Palestinian will accept. At the same time, we have a responsibility to see that our mission remains clearly political, without attacks on public or private property, and avoiding destruction inside our beloved city of Acre. For, first and foremost we have a just and true cause, and we say what we say with lofty purpose and our heads held high.

When I was in Acre once, I was talking with a Palestinian-Israeli and I asked him about his identity. He told me, “I’m 100 percent Israeli. I just want equality.” Admittedly, he was from the small Christian minority. But that’s not how these Acre politicians are talking now, at all.

Most Palestinian-Israelis are Muslims, and the Israeli police and security forces invading the al-Aqsa Mosque on last Friday and subsequent occasions was too much for them. It was the fasting month of Ramadan, when Muslims abstain from food and drink from sunrise to sunset. Last weekend was the last Friday of the holy fasting month. Saturday was the Night of Power, when Muslims commemorate the first revelation of the Qur’an to the Prophet Muhammad in 610 A.D. The al-Aqsa mosque is the third holiest shrine in the Muslim world.

The sight of commandos throwing stun grenades and flash bombs at worshipers inside the sacred mosque was too much for many Palestinian-Israelis.

This population has in any case been simmering with resentment. In 2018 the Israeli parliament passed a law investing sovereignty solely in Jewish Israelis, openly declaring Palestinian-Israelis to be second class citizens. Despite getting 13 seats in parliament last year, their Joint List was boycotted by the Jewish parties and they were kept politically on the sidelines. This would be as though in the US there could be no Black cabinet members. They face widespread social and employment discrimination and are over-represented in menial and service jobs whern they are employed at all. They therefore were hit especially hard by the lockdowns instituted to fight the coronavirus during the past year. And then, there is the troubling rise of Jewish extremism and supremacy, which often advocates the ethnic cleansing of Palestinian-Israelis and which is producing militias that are attacking them, as at Ramleh this week.

Having been pushed to the margins of Israeli political and economic life, they have come to sympathize strongly with the 5 million stateless Palestinians under Israeli occupation over the Green Line. The existence of Palestinian-Israelis is sometimes used as a propaganda talking point by apologists for Israel’s Apartheid policies in the Occupied Territories. That is a hard argument to make right now.