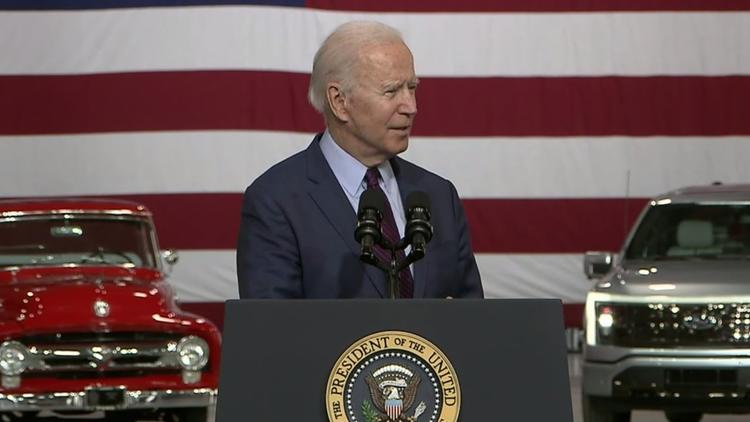 Ann Arbor (Informed Comment) – President Biden came to the Ford Rouge River Plant to tout new electric vehicles, one of his signature climate-friendly programs, on Tuesday. He was met at the airport by Rep. Debbie Dingell and by Rep. Rashida Tlaib, the only Palestinian in the US Congress, who welcomed him but also gave him an earful about how his administration’s backing of the far right wing government of Israeli Prime Minister Binyamin Netanyahu was harming Palestinian rights. So reports Alana Wise at NPR.

Biden thinks of Detroit as UAW territory, and of course it is. But Dearborn, the location of the Rouge River Plant, is also a major Arab-American population center, and it wasn’t possible for the day to be only about the automobiles. Actually, the Rouge River plant helped create the Arab-American community. Many Arab-Americans who came to the US in the late 19th century had engaged in the peddling trade in the Midwest, tramping out to isolated farm families with sewing notions and other goods on their backs. The Sears and Roebuck mail order house in Chicago (the Amazon.com of its day) and the Ford Model T automobile killed the peddling trade and left many Arab-Americans jobless. But the Model T, manufactured at the Rouge River Plant, also created a big labor demand, and many Arab-Americans relocated to Dearborn and got jobs there. Once they were concentrated like that, southwest Michigan then became an attractive place for Arab-American immigrants and so the community grew.

Biden, unbeknownst to him and his staff, was also coming into the heart of Arab-American Michigan on the very day when much of Dearborn joined a Palestinian General Strike, staging protests near the plan. Biden and his team had taken the usual Washington approach to Israel, which was to give the Netanyahu government carte blanche to kill Palestinians on the grounds of “self defense” (most Israeli killing of Palestinians has nothing to do with self defense but with furthering Occupation aims).

Biden felt constrained publicly to express his wishes for Rep. Tlaib’s family in the West Bank to be safe. It was a poignant moment that demonstrated the sea change going on in US public opinion on Israel-Palestine.

So what was the Palestinian protest that Biden accidentally ended up in the middle of? Muhammad Muhsin Watad and Fadi al-Asa report for Al Jazeera on the Great Palestinian General Strike of May 18, 2021.

Throughout “historic Palestine” (i.e. the West Bank, Jerusalem, Israel proper and Gaza) Palestinians struck on Tuesday against the policies of the Israeli Occupation that resulted in the current war on Gaza. The strike began in Jerusalem and spread to Israel itself and to the Israeli-occupied West Bank. It was the first time the Palestinians had demonstrated such solidarity with one another since the Second Intifada or uprising of 2000, when former Israeli Prime Minister Ariel Sharon made a provocative incursion into the al-Aqsa Mosque compound, provoking universal Palestinian ire.

Virtually every Palestinian town throughout Israel-Palestine saw rallies and marches on Tuesday, despite severe Israeli police repression of the protests. Some 1,000 Palestinian youth were arrested inside Israel alone.

One of the incidents the Palestinian-Israelis were protesting was the shooting death of Musa Hasuna (31) in Lyd at the hands of a settler, and the collusion of Israeli police with settler gangs who came back over the border from their squatter settlements on Palestinian land to attack Palestinian-Israelis.

All the Palestinian-Israeli shops in the port of Haifa were closed. Youth canvassed Palestinian-Israeli neighborhoods with pamphlets calling for people not to go to work or school on Tuesday. They were protesting the massive Israeli bombardment of the Palestinians in the Gaza Strip, the heavy-handed police attacks in Jerusalem and the al-Aqsa Mosque, and the expulsion of Palestinian families from their homes in Sheikh Jarrah.

In Nazareth, the largest Palestinian-Israeli town (pop. 77,000), the whole city was closed down and a demonstration was staged in the afternoon. In Majd al-Krum, mothers marched with their children, flying balloons with the colors of the Palestinian flag. Flying the flag itself inside Israel is a serious crime.

There was a backlash from Israeli militant extremists, who burned the Istiqlal Muslim cemetery in Haifa. The leader of the Palestinian-Israeli Joint List in parliament, Ayman Odeh, charged that “the fascists who burned the graves of our grandparents and ancestors bullied the dead because they were too cowardly to confront us in our neighborhoods.”

‭ ‬There were also widespread protests in every town and village of the Palestinian West Bank, which the Israeli army attempted to suppress, resulting in “unprecedented” clashes between the two. The Israeli security forces shot two Palestinians dead, one near Ramallah and the other at Hebron. In Nablus, Israeli live fire left 11 Palestinians wounded. The Israeli army also cracked down on Bethlehem and many other Palestinian towns.

Watad and al-Asa report that Ahmad Milham, head of the Popular Committee for the Defense of the Land and Dwellings in Wadi Ara, said, “We are talking about the gift of a spontaneous popular upraising whose mainstay is the youth movement in the Arab towns, an unprecedented movement unconnected to the traditional organizations. It is delivering a message to the Israeli institutions that the spark of cumulative anger has been ignited, inasmuch as it has become clear that no one can control this gift.”

He said that the protest rallies and marches witness among Palestinian-Israelis inside Israel in support of Jerusalem and the al-Aqsa mosque show that the youth generation has plunged itself into a campaign of self defense in the face of gangs of Israeli squatter-settlers who are attacking the very existence of Palestine.

Another Palestinian organizer on the West Bank, Sulaiman Abu Rashid, said that the collective action of the Palestinians across the Green Line (the border between Israel and the West Bank) showed that the borders drawn by the Israelis were nothing but pen on paper. Moreover, Palestinians with Israeli citizenship had been shown to be just as vulnerable to attacks by police and settler militias as those without.