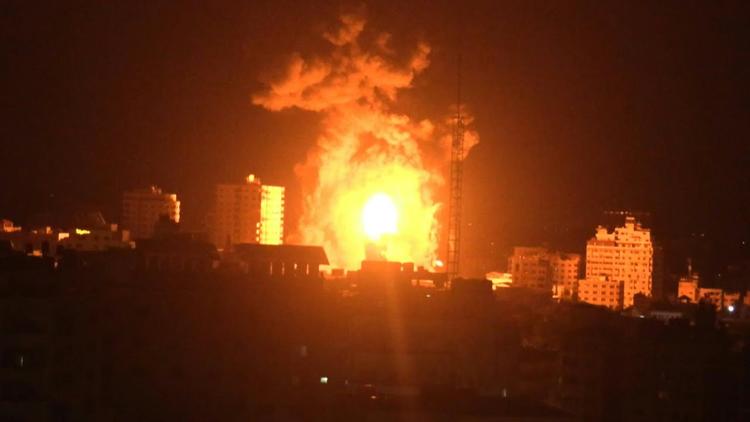 Ann Arbor (Informed Comment) – In the deadliest single day of the Israeli air campaign on Palestinian Gaza, 42 were killed on Sunday, according to the BBC, including 16 women and 10 children. The BBC reports from the Gaza ministry of health that “The overall death toll in Gaza now stands at 197 people, including 58 children and 34 women, with 1,235 injured.”

Some 10,000 residents of Gaza have been forced out of their homes by the airstrikes, which are terrorizing the civilian population.

The BBC adds that Hamas rockets have killed 10 Israelis in the past week, including a child. On Sunday, the rockets were mostly intercepted by the Iron Dome defense system, though a few caused minor property damage in southern Israeli cities like Ashkelon and Ashdod, areas from which the Palestinian refugees in Gaza were expelled by Zionist militias in 1948. In international law, firing unguided rockets toward civilian areas is a war crime.

On Sunday, an Israeli strike on an underground tunnel used by Hamas to evade the Israeli blockade of Gaza, in place since 2007, caused several buildings above it to collapse. The noncombatant residents of those buildings received no advance warning and so many died or were injured. Israeli bombs did also fall directly on civilian structures, killing families. In the international law of war, if you can’t hit an enemy target without killing lots of noncombatant civilians, you’re not allowed to take the shot.

Israel notoriously flaunts international law because Washington runs interference for it. The Biden administration again on Sunday blocked a UN Security Council attempt to call for a ceasefire. The US stance is that this should just go on.

The Israeli dream of destroying the Muslim fundamentalist Hamas as an organization has resulted in these occasional intensive bombing and assassination campaigns, but it has never worked and won’t this time, either.

Hellen Ottens-Patterson, head of mission in Gaza for Doctors without Borders [Médecins Sans Frontières or MSF] has just warned that the health system servicing the 2 million Palestinians in Gaza, half of them children, is in danger of collapse under the impact of the Israeli blockade and airstrikes. There is a severe shortage of medicines, as the coronavirus pandemic continues there, increasing the challenges for hospitals. The biggest problem is that aid cannot be reliably delivered because of the siege and the constant bombardment by the Israeli Air Force. She said that there is a desperate need for measures to ensure that aid can come in and that the damage caused by airstrikes can be repaired.

In a statement on May 13 earlier in the Israeli bombing campaign, Dr. Ottens-Patterson said,

““The Israeli bombing is incredibly heavy and stronger than previous bombing campaigns . . . Relentless bombing has destroyed many homes and buildings all around us. It’s not safe to go outside, and no one is safe inside, people are trapped. Emergency health workers are taking incredible but necessary risks to move around.”

Meanwhile, the Red Crescent Society (like our Red Cross) said that its medical teams treated 909 wounded Palestinians on Sunday in the West Bank, Jerusalem an Gaza.

Al Jazeera English reported that the main hospital in Gaza City was overwhelmed with the hundreds of wounded on Sunday. Hana Adli writes from Gaza, where Al Jazeera’s offices have been reduced to rubble by Israeli fighter jets;

“I have never seen anything like this in my life,” she told Al Jazeera. “There were body parts collected on hospital beds and unbearable scenes.”

As rescuers struggled to pull victims from the debris of destroyed buildings, many of those rescued could not reach the hospital as the main road leading to al-Shifa – the largest medical centre in the Gaza Strip – had been hit as well.”

Most of the wounded were injured when rubble fell on them rather than by shrapnel.

Just to underline, the road leading to al-Shifa Hospital inside Gaza City did not pose a security threat to Israel. A rocket emplacement would be a fair target, but there was none on that road. The Israeli military is simply attempting to degrade Gaza infrastructure in general, regardless of its direct military relevance. General infrastructure, however, serves civilian purposes. Roads are necessary to get to hospital or to the grocery to buy food or to the pharmacy for medicine.

Veteran Middle East correspondent Bel Trew reports for The Independent from Jerusalem that Gaza is on the verge of a complete electricity blackout. In about two days, the main power station will run out of fuel, plunging the Gaza Strip into darkness, including hospitals and clinics if they run out of fuel for their generators as well.

Likewise, the constant bombardment has destroyed electrical wires, already leaving many Palestinians without electricity or much reducing its availability.

It may be that the Palestinians killed by falling rubble and by shrapnel from the bombings are only a part of the death toll, since mortality from lack of medicine and medical care will also rise, for some time to come.