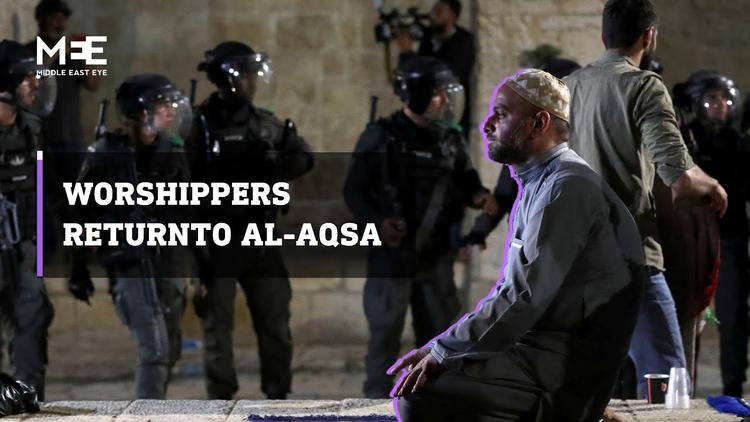 Ann Arbor (Informed Comment) – Al Jazeera reports that despite the Israeli security forces’ attack on worshipers at al-Aqsa Mosque on Friday evening, some 90,000 came back for special evening prayers on Saturday.

Initially, the Israeli forces had intended to prevent the worshipers from arriving there from the West Bank, but given the violence they inflicted on worshipers on Friday evening, they decided to back off and let the vehicle caravans in, according to Arab 48.

In one instance, the Israeli forces stopped Palestinian vehicles near Abu Ghosh Saturday afternoon, so the worshipers simply got out and began walking the six miles to al-Aqsa on foot. Some of those coming in on foot from the West Bank were greeted by vehicle caravans mounted by residents of the Old City, who picked them up and brought them in.

Palestinians in the neighborhood of Sheikh Jarrah again protested the attempt of Israeli authorities to ethnically cleanse dozens of families from the quarter. The Israeli Supreme Court will rule on the matter on Monday. The protests were put down with stun grenades and the Red Crescent Society reported that 90 Palestinians were injured, about a third of them seriously enough to go to hospital. Palestinians also mounted protests about Sheikh Jarrah in several West Bank towns. Israel is declining to recognize Palestinian property claims that go back before the Israeli occupation in 1967.

What can stop Palestinians being evicted from Sheikh Jarrah? | Inside Story

The mainly Palestinian Old City of Jerusalem saw an unprecedented number of Israeli troops and police on patrol.

Before the pandemic, as many as 250,000 might have gathered on a holy night like Saturday at the mosque complex and its environs. The numbers were reduced in part because Israeli forces interfered with Palestinians coming from the West Bank for the prayers. Also, most Palestinians still have not been vaccinated, and Israel as the Occupying power has shirked its responsibility to provide them with shots, so some are still avoiding crowds.

“In the Name of God, the Merciful, the Compassionate.

It is common for Muslims to have a retreat in a mosque on the Night of Power. Many Muslims believe that it is a sacred night, when angels descend to earth, blessings abound, and there is a special peacefulness. It is a time for extra prayers, which are especially likely to be answered, and for recitation of the Qur’an.

So it is especially distressing to have the Occupation forces crack down on that very evening.

Most Muslims believe that the Prophet Muhammad came on a supernatural journey to Jerusalem, from which he ascended to heaven where he saw the angel Gabriel. He is said to have ascended from the very site on which the al-Aqsa mosque stands. To pray on that site on the Night of Power is thus doubly blessed.

I wrote about the Prophet Muhammad and the Night of Power in my book,