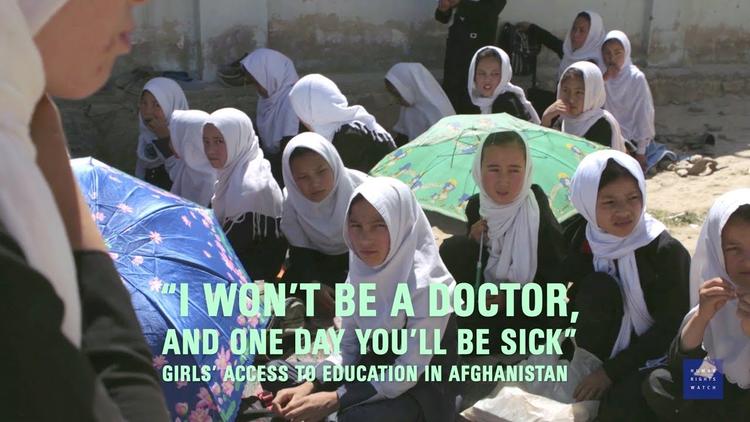 ( Human Rights Watch) – Scenes from Sayed ul-Shuhada High School in Kabul, Afghanistan, where as many as 85 people including many schoolgirls were killed in an attack this weekend, should break anyone’s heart. They certainly broke mine. In 2017 a filmmaker and I spent a week at the school, filming a video to accompany a report on barriers to girls’ education.

The school had difficulties providing girls an education. Girls studied outdoors, in tattered tents or the open air, and the school was desperately overcrowded. Girls lacked essential facilities such as toilets and a library, and faced hardships outside school, too.

Their neighborhood is very impoverished, populated predominantly by members of Afghanistan’s Hazara minority. It has increasingly been targeted for attack, including on a local maternity hospital in May 2020. Families were often unable to afford transportation and many girls walked 45 minutes or more to get there. Many worked in addition to studying, at jobs such as carpet-making and tailoring, to support their families.

But what shone through was the girls’ determination to study no matter what. In a country where less than 30 percent of women can read, these girls bring hope for a brighter future. They were funny and lively, like girls anywhere, but also deadly serious about getting an education. This makes their senseless killing so particularly devastating.

This is a perilous moment for Afghanistan. All US troops are slated to leave the country by September 11, 2021; other NATO troops are going too.

A devastating picture of what lies ahead is emerging, one of rising violence and likely increased Taliban control, both of which will disproportionately harm women and girls. Intensifying fighting may also bring more atrocities by the Afghan branch of the Islamic State (ISIS), which has been behind many of the attacks on Hazaras. Recent months have brought attacks on female journalists and other high-profile women.

US President Joe Biden has called “the end of America’s longest war” an accomplishment. But the war has in no way ended, and its front line yet again reached the gates of a girls’ school. The US and other countries withdrawing troops should understand that their responsibility to Afghan girls and women is not finished. They should assist efforts to investigate and ensure accountability for this and other unlawful attacks on civilians, and support safe access to essential services like education for everyone.