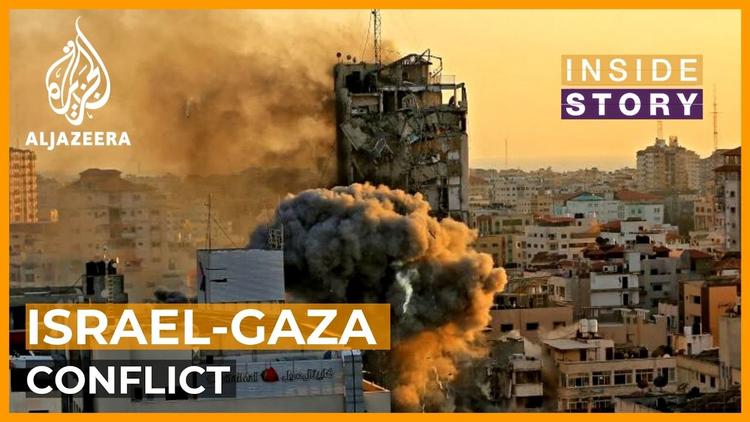 Ann Arbor (Informed Comment) – Steve Hendrix, Shira Rubin and Michael E. Miller at WaPo report that Israeli air strikes on the densely populated urban areas of the Gaza Strip had by Thursday evening killed 109 Palestinians, among them 28 children, and had wounded 621 persons.

The Israeli Air Force deliberately destroyed some of Gaza’s taller buildings, alleging that the ruling Hamas party had offices in them. They gave advance warning so that families could leave their homes. But the huge bombs falling on a civilian city inevitably did damage also to nearby buildings and have left families homeless. Flying glass and debris injured noncombatants.

Claire Parker and Adam Taylor at WaPo report that Hamas and other militant groups in the Palestinian Gaza strip have fired a thousand rockets into Israel since Monday. Almost all landed uselessly in the desert or were intercepted by Israeli Iron Dome interceptors. Despite being unguided, some landed on buildings or parked cars, apparently more or less by accident, and they killed seven Israelis, including a teenage boy and a young girl. These are war crimes on the part of Hamas and the other groups in Gaza, since indiscriminate fire into civilian areas is strictly forbidden in international law.

It has to be underlined, however, that the thousand rockets did not damage a thousand buildings. More like a handful. Most Gaza rockets only travel 3 to 6 miles, and at that range they just stir up desert sand. Hamas has deployed a few longer range rockets, and hit Tel Aviv.
But the rockets are still primitive and there weren’t many longer distance ones.

This is psychological warfare. The organization is letting Israelis know that it can strike relatively distant targets. The barrage was provoked by the Israeli attack on worshipers in the al-Aqsa Mosque. Hamas styles itself and Islamic party and could not let this defilement of Muslim sacred space go unanswered.

The rockets killed Israeli noncombatants, which is terrorism.

But there is also a principle of proportionality in the law of war. and Israeli fighter jets have killed many times the number of Palestinians as Hamas rockets had Israeli civilians. That is state terrorism.

Since the situation in Gaza is not well understood in the outside world, it is worth reviewing it.

Nearly two million Palestinians live in the Gaza Strip, roughly the population of Houston inside city limits. It is one of the more densely populated places on earth.

Some 50% of the population consists of children. One in 10 children there are stunted, in part because of food insecurity imposed by the Israeli blockade.

Over 70 percent of the families in Gaza are refugees, having been ethnically cleansed from southern Israel.

Gaza is not an independent state. Its people are stateless and at the mercy of the Israeli military.

Here are the facts and figures given by the UN Relief and Works Agency:

Ashkelon, for instance, was the Palestinian town of Majdal, a town of some 9,000 in 1945, mostly Muslim but with some Christians. They were farmers or weavers and Majdal fabrics were famous. Some 8,000 were forced to flee advancing Zionist forces in 1948. Some slipped back in after the Israeli conquest, but in 1950 Israeli Prime Minister Ben Gurion ordered their expulsion. Some 2,300 were expelled to Gaza, joining townspeople who had already fled there two years before.

Other Palestinians in Gaza come from Beersheva, Ashdod, and other southern towns. Israelis now live in their homes and farm their land, while the Palestinians huddle in refugee camps. About a third of the Gaza population, 600,000, still live in eight refugee camps. Israel ruled Gaza directly 1967-2005 (doing nothing to improve their lives), and since 2005 has kept it as an open air concentration camp.

The Israeli Air Force destroyed the Gaza airport and port. Israel is considered in international law the Occupying power in Gaza, but often takes steps inconsistent with its responsibilities in this regard. At one point in the zeros the Israeli military made a plan to only allow enough food into Gaza to keep the population from becoming malnourished, but nothing more. No chocolate for the children. It was one of the creepiest moments in the history of colonialism.

The unemployment rate in Gaza is 50%, the highest in the world. Half the population depends on food aid. The aquifer is polluted and increasingly salty from rising seas owing to climate change, so truly clean water is available to only about 5 percent of the population. Israel has several water purification plants. The Palestinians of Gaza do not.

There is no equivalence between Israel and Gaza. Israel has the best-equipped military in the Middle East and has several hundred nuclear bombs, Its gross domestic product (nominal) per capita is on the order of $42,000 per year.

The nominal GDP per capita in Palestine is $3000, and those who live in Gaza earn less yet.

Al Jazeera: “Can diplomacy prevent another war in Gaza? | Inside Story”