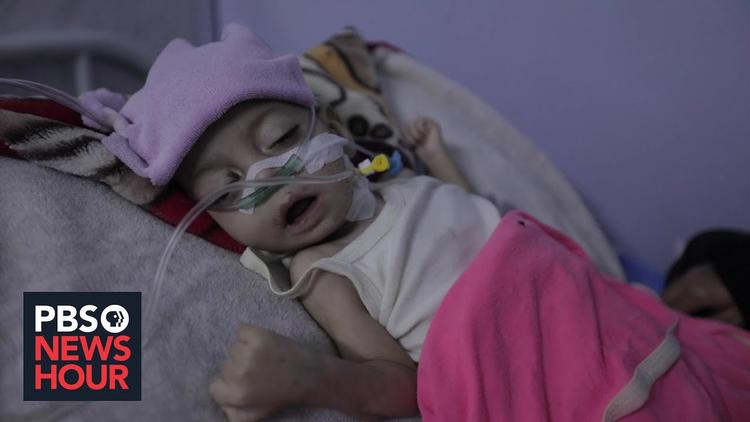 ( Waging Nonviolence) – During the early days of the war, when Iman Saleh called her family in Yemen, they would lie to reassure her they were safe. “They would always say, ‘Don’t worry, it’s happening far from us,’” Saleh said. “It felt like I was becoming a burden to them, because now they were trying to make me feel better, on top of trying to survive.”

Now, when Saleh calls her family in Yemen, she simply asks how their day is going. For the past six years, the 26-year-old organizer from Detroit has struggled with survivor’s guilt, watching her homeland ravaged by a war between the U.S.-backed Saudi coalition and the Houthi rebels. As a founding member of the Detroit-based Yemeni Liberation Movement, Saleh works to educate and mobilize the Yemeni diaspora for an end to the war.

Since its start in 2015, the Yemen war has become what UNICEF declared “the world’s worst humanitarian crisis,” resulting in the deaths of more than 230,000 people. Roughly 80 percent of the population is in dire need of humanitarian aid. Children have accounted for a quarter of the casualties over the last three years — and as Yemen heads towards the most devastating famine in modern history, over 400,000 Yemeni children are projected to die this year alone in the absence of urgent intervention.

The United States has played a pivotal role in this man-made humanitarian crisis, providing the Saudi-led coalition with billions of dollars worth of weapons, training and military support they would be unable to get elsewhere. The United States has also been complicit in war crimes committed by its allies, including brutal air campaigns against civilians and critical infrastructure, as well as the use of starvation as a war tactic.

Over the course of the war, Yemenis have endured the COVID-19 pandemic, a cholera epidemic, natural disasters, mass displacement and violent air raids. They’ve also been subject to a crippling air, land and sea blockade — and since December 2020, the Saudi coalition has prevented fuel from entering the country, preventing food and necessities from reaching people who desperately need them.

Earlier this year, President Biden vowed to end all U.S. support for offensive operations in Yemen. Although antiwar advocates and members of Congress have called for clarification on what that would look like, they have yet to receive an answer.

“We were just feeling hopeless, seeing our families suffer and seeing the country of Yemen suffer,” Saleh said. “We wanted to do something that was not only radical, but in solidarity with the people of Yemen.”

On March 29, Saleh and her 23-year-old sister, Muna, embarked on a hunger strike in Washington D.C. For over three weeks, the sisters survived on a diet of only water and Pedialyte. Their primary demand was for the United States to end all support for the Saudi blockade.

Throughout the strike’s 24-day span, Saleh documented the physical and mental toll of hunger on the movement’s social media pages. The group also hosted rallies in front of the White House and a vigil in memory of those who have lost their lives to the blockade, catching the attention of Congresswomen Cori Bush, Ilhan Omar and Rashida Tlaib.

I spoke with Saleh last month about the blockade, going on hunger strike and her vision for building international solidarity.

How has the blockade affected everyday life for citizens of Yemen?

At the beginning of the year, the Saudi coalition decided to impose a fuel blockade on Yemen. I like to call this a kind of humanitarian war crimes gymnastics. Basically, they can say, “Oh, we’re not blocking food and medicine from coming into Yemen, we’re blocking fuel.” But you can’t transport any food or other necessities throughout Yemen if you don’t have fuel — so what we’re seeing is a huge increase in starving children coming into hospitals for critical care. A lot of these hospitals can’t operate because there’s no fuel for their generators. People can’t power their homes, and there’s no way to get food around. It’s a really cruel environment people are suffering from. We always say that the people of Yemen aren’t starving, they’re being starved.

You and your sister were on hunger strike in D.C. to end the blockade for more than three weeks. What kept you going?

Besides the people of Yemen, it’s the experience itself. Experiencing starvation is a violation of the body. Even though I did this by choice, I felt so extremely violated, because I imagine myself being forced into this. Being forced to starve. There’s so many factors that people don’t think of when they think of famine, but I’ve been able to talk to the world about it, and I’ve been able to show what people are going through at the hands of the United States.

When we think of starvation, we think of the body, but it’s really more than that. For children going through malnutrition, there are permanent effects on the body during their development. They can suffer from mental health problems for the long-term. There’s also chronic malnutrition. Even if they are able to somehow get better, going through starvation puts them at higher risk of experiencing critical malnutrition again.

For adults to watch their families go through this and to feel no hope, like no future is ahead of you — that’s a huge toll on your body. And then there’s the physical aspect of it: There’s the memory loss, the brain fog, feeling more tired, feeling your body getting weaker. You just sort of feel like you’re waiting to die. So I’ve been able to talk about this with people and to bring awareness.

Is there anything else that people misunderstand about hunger strikes?

Hunger strikes are supposed to be this nonviolent form of protest. I’ve been telling everybody that it’s actually the opposite. When we say hunger strikes are nonviolent, it’s like — “nonviolent to who, exactly?” Because I felt extreme violence while I was striking, and I wasn’t even being forced into this. So I can’t imagine an entire nation of millions of people being forced into this. I don’t care what Gandhi said; this is extremely violent. I wish it didn’t have to come to this, where you use your body as a last resort.

While in D.C., the Yemeni Liberation Movement hosted a vigil to honor those who have lost their lives in Yemen due to the blockade. What was that experience like?

The vigil was a really powerful moment. We had well over 50 people in attendance, including Reps. Rashida Tlaib and Cori Bush, who came to pay their respects and speak in solidarity. We try to always make sure that when we talk about the people in Yemen, our voices are just the extension of theirs. We don’t want to only talk about the impact of the war and make people’s lives political. We want to humanize our people, and to not allow the desensitization of their suffering. About a week and a half into the hunger strike, I found out that my great uncle in Yemen died from COVID-19, due to the blockade, so it’s been really difficult.

For many people in the United States, Yemen seems very distant. What do you wish people knew about your homeland?

Yemen is not just a very beautiful country geographically, we’re also a very strong people. We have so much culture and history. Since the war, the Saudi coalition has bombed around 80 UNESCO World Heritage sites — these are thousands and thousands of years old, these mud brick homes in Yemen. Actually, Sanaa, one of the oldest cities in the world, is in Yemen.

In the past, we’ve organized against the Ottomans and kicked them out. We’ve also fought against British colonizers who’ve been in Yemen for over 160 years and pushed them out, using guerilla tactics. Our people are mountain people. You can’t really occupy them, and it’s hard to go to war with them. Saudi Arabia and the United States are both big countries that have all the money in the world to spend and enough time on their hands to do it — and yet they still can’t destroy the people’s will. They’re doing their absolute best, but I would still call them unsuccessful in doing that.

We have this proverb in Yemen — the translation is basically, “No one in Yemen goes hungry.” That’s really a testament to how hospitable and how united our communities are with each other. We keep our culture and our people very close to us.

After 24 days, you and your sister ended your hunger strike. What has that transition been like?

It’s Ramadan right now, so we’re still fasting. We’re just kind of taking it day by day. We’re under medical supervision, so we have to eat very slowly and eat small portions, and build it from there.

My sister and I made the decision together, along with the rest of the Yemeni Liberation Movement and the Palestianian Youth Movement, who we’ve been collaborating with. I didn’t really want to end it, because of our long-term goal — but also, that goal requires a lot of work, and it requires us to be in our best health. It’s kind of bittersweet, because I’ve been eating, but at the same time, we know that the work is not done.

Even before the hunger strike, the Yemeni Liberation Movement was collaborating with groups like the Palestinian Youth Movement, Anakbayan (a grassroots organization of Filipino youth) and Detroit Will Breathe, which fights against police brutality. As an organizer, what have you learned from building these bridges?

When we talk about international solidarity and how that operates in organizing spaces, it’s really important that it’s not just talk or photo-ops. It has to be about actually doing the work and building trust within our communities. We won’t really achieve liberation until we can all see our liberation within another community. Let’s take Yemen, for example: When we work towards Black liberation, that also means Yemen’s liberation, because when you weaken the system of imperialism and colonialism, you essentially weaken that everywhere.

Throughout history, international solidarity has been a huge part of Black liberation. We’ve seen that in the way the Black Panthers had chapters in Algeria, when the Algerians were fighting against French colonialism. The only way that we can achieve liberation back home — as well as in the states — is if we all come together and recognize that though our struggles may look a little different, they ultimately come from the same oppressor. We’re stronger together.