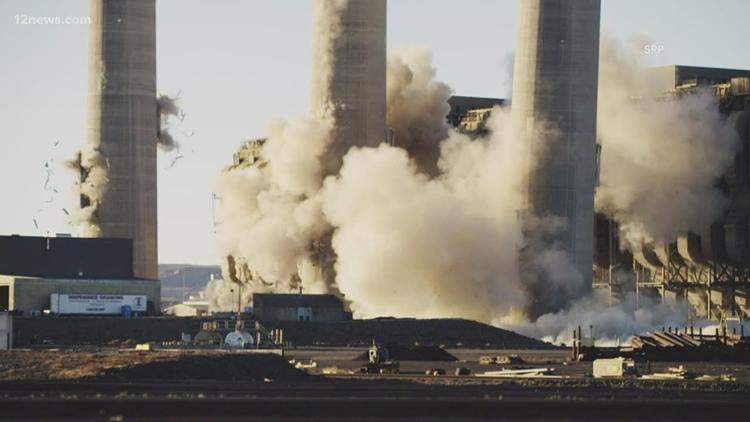 ( Cronkite News) – WASHINGTON – Navajo and Hopi witnesses agreed the region needs to move away from its economic dependence on coal, but specific proposals on how to get there remained elusive after a House hearing Tuesday.

The tribal representatives joined witnesses from across coal country at a House hearing on “supporting communities through the energy transition” – a transition that has been particularly hard on northeastern Arizona. The recent closure of mines there has left hundreds unemployed in an area with chronically high jobless rates.

“Our Navajo Nation government’s gross income from coal revenue severely decreased and we still have not found a way to replace the revenue in future fiscal years,” said Navajo Council Member Rickie Nez.

Nez said that while the transition away from coal has been “very painful,” tribal communities such as his are built on “a wealth of natural resources, including the critical minerals and rare earth elements necessary for achieving a renewable energy transition.” The area has the natural resources to rebound if the federal government stops throwing up hurdles to development, he said.

“We believe we have the right and responsibility to develop and manage these resources,” said Nez, who is also chairman of the council’s Resources and Development Committee. “Unfortunately, an estimated 86% of Indian lands that have this mineral wealth potential remain underdeveloped because of the federal government’s often heavy-handed regulation of Indian property.”

But other witnesses said that before moving forward, the government needs to make sure that mining companies clean up what they left behind.

“We Hopi people are very concerned that there is virtually nothing being done to repair and rehabilitate our lands that have been damaged and destroyed by over half a century of coal mining at Black Mesa,” said Ben Nuvamsa, executive director of the KIVA Institute and a former chairman of the Hopi tribe.

Nuvamsa, in joint testimony with Tó Nizhóní Ání Executive Director Nicole Horseherder, said the federal government’s focus should be on repairing the environmental damage that coal mines left behind.

“A half-century of coal mining and water withdrawals by Peabody have left considerable damage across the two mine sites that still remains unaddressed years after closure,” said Horseherder, founder of the grassroots Navajo group.

Peabody, which operated the Kayenta mine, declined a request for comment.

The Kayenta mine closed when its only customer, the nearby coal-burning Navajo Generating Station, ceased operations in 2019. Most of the workers there were Navajo or Hopi.

The Salt River Project, which owned the Navajo Generating Station, said in 2017 that it was no longer economically feasible to run the coal-burning plant in the face of competition from cheaper, natural gas-fired generating stations.

But Republicans on the committee repeatedly pointed to Kayenta as proof of failed Democratic environmental policy.

“We’re here today to hear various witnesses complain about job losses in the coal industry in Arizona and New Mexico that are the direct result of the Obama administration’s war on coal,” Rep. Paul Gosar, R-Prescott, said Tuesday.

Rep. Pete Stauber, R-Minn., said Republicans have been talking about the issue since before the closure of Kayenta and the Navajo Generating Station.

“They rightfully warned that the economic impacts would be long-lasting and the jobs would be difficult, if not impossible, to replace in the short term,” Stauber said. “They were correct.”

Whatever the cause, Horseherder and Nuvamsa said the federal Office of Surface Mining Reclamation and Enforcement (OSMRE) is “failing miserably” at its job of holding Peabody responsible for returning land to the tribes in “as good condition as received,” as required under the Surface Mining Control and Reclamation Act.

The Navajo Generating Station, once the largest coal-burning plant in the West, closed in 2019 when coal was no longer economically feasible fuel. It was the only client of the nearby Kayenta mine, which also closed. (Photo by Bill Morrow/Creative Commons)

Joseph Pizarchik, former director of OSMRE, acknowledged these shortcomings, but said no one could have anticipated the collapse of coal mining when the act was written decades ago.

“Some parts of SMCRA do not provide OSMRE and states with the tools they need to effectively manage the current industry crisis,” Pizarchik said. “We have issues to address. Some states fail to effectively implement the law.”

Horseherder and Nuvamsa testified that communication from OSMRE has fallen short, making tribal participation in and monitoring of the reclamation process “incredibly difficult.” Their groups had to hire someone to go to Denver to scan paper copies of OSMRE documents that are supposed to be online, they said.

They called on the government to require that Peabody “allow full participation and involvement of our tribes in helping determine the scope and direction of reclamation,” a move they said could mean jobs for laid-off miners.

Mary Cromer, deputy director of the Appalachian Citizens Law Center, agreed that mine “reclamation work is often completed by individuals that were previously employed mining the coal. By requiring timely reclamation, OSMRE will also be preserving much-needed jobs in coal communities.”

Whatever happens, tribal representatives said they need to be included in the decision-making.

“Indian Country and the Navajo Nation need to be at the table when discussing the energy future and transition of the United States,” Nez said.

In the meantime, he said, the Navajo Nation will push to keep the Navajo Mine and Four Corners Power Plant plan operating through 2031.

“We have just 10 years to transition our economy and jobs to a new energy future responsibly,” Nez said.

12 News: “Drone video captures the demolition of the smokestacks at the Navajo Generating Station”