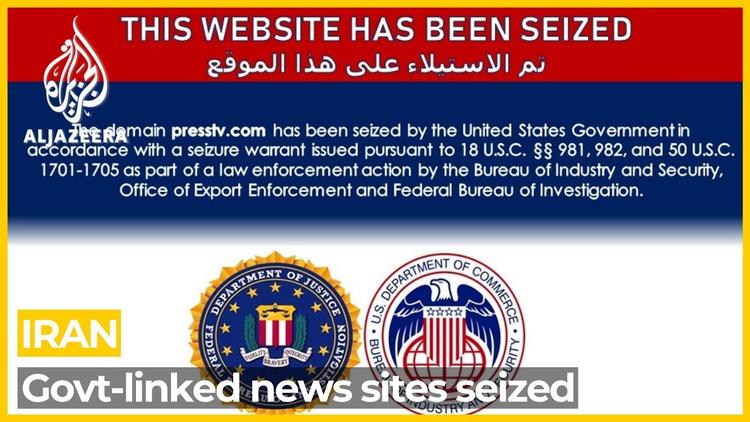 Oxford (Special to Informed Comment) – The Bureau of Industry and Security, an agency of the United States Department of Justice, in a statement on Tuesday 22 June announced that it had seized 33 websites and news outlets used by the Iranian Islamic Radio and Television Union (IRTVU), and another three run by the “Iran-backed” Kata’ib Hezbollah in Iraq for allegedly engaging in “disinformation campaigns and malign influence operations”.[1] The list included Press TV, Iran’s main international English-language channel, and Al-Alam, Iran’s Arabic-language channel.

The sites were replaced on Tuesday with notices in English and Arabic saying that they had been “seized” as part of a law enforcement action.[2] Clearly, nobody had told them that Iranians speak Persian, not Arabic.

Whoever was responsible for this gross act of censorship clearly did not know much about various news outlets in the Middle East, because in addition to closing a large number of Iranian news outlets, they also closed down a number of non-Iranian outlets, some of which are even hostile to Iran. They included Forat website that belongs to Amar al Hakim, who is perceived to be one of the best friends of the United States and the Saudis in Iraq.

Additionally, a children’s station, Hud-hud, was shut down, as well as three non-Iranian TV stations, two of which, Al-Anwar and Ahlulbayt based in London and Iraq, belong to the anti-Iranian Shirazi movement. The third, Karbala, belongs to the Imam Hussain Shrine that comes under the supervision of the Iraqi Shia source of emulation (marj’a), Grand Ayatollah Ali al-Sistani. Lualua TV, an Arabic-language Bahraini channel that broadcasts from the UK, was also taken down.

Several other Shia media outlets, in places as far as Azerbaijan and Nigeria, also displayed seizure notices, prompting some observers to speculate that the crackdown was an attack on Shia sites, both religious and political, in Iran and abroad. Presumably, in the minds of many in the US government, Shia equals the Iranian State.

The seizures have affected only the .com, .org and .net domains that are under US jurisdiction. Some of those websites went back online shortly afterwards under different domains, including Press TV that remains available at the .ir domain.

When Iranian officials block some foreign media that clearly engage in hostile propaganda against the Iranian government and in some cases openly call for boycotting the elections and toppling the regime, US officials are quick to accuse Iran of censorship. During the past few days, Western and especially American authorities and media have been up in arms about the closure of a TV station in Hong Kong. However, as an example of American exceptionalism, the same does not seem to apply to them.

This is despite the fact that the United States claims to be a supporter of free speech, but this grotesque act of censorship is a clear case of double standards and the best example of “do as we say, not as we do”. You cannot establish democracy and free speech in other countries by violating those values so blatantly.

The move also weakens international trust in the independence of US domains and gives credence to the propaganda that the internet is a tool of the empire. It will also strengthen the arguments of Iranian authorities that Western, particularly American, domains are unreliable and even hostile, and Iran has to develop its own National Information Network (NIN), which is an internet nationalisation initiative by Iran.

It is difficult to understand the logic behind this overt act of censorship. One is bound to ask what makes U.S. authorities so afraid. How many Americans watch or listen to the Iranian media that these officials are so worried that they might be misled by Iranian “disinformation”!

Some have argued that the aim of such antics has been to increase leverage against Iran in the nuclear talks. One lesson that we should have learned from President Trump’s violation of the nuclear agreement and his policy of maximum pressure on Iran is that it failed miserably. Not only that policy did not bring Iran to its knees and force it to accept US diktat, on the contrary, it persuaded her to engage in “maximum resistance” and to even increase its nuclear activities.

In January 2020, following the assassination of the commander of Quds Brigade, General Qasem Soleimani, Fars News Agency’s .com domain was blocked. A few months later, the United States seized two websites utilised by Kataib Hezbollah, as well as 92 Iranian domain names. If those measures did not produce enough leverage against Iran, it is unlikely that the closure of 33 other Iran-linked websites would act as a leverage.

The resumption of Iran-US dialogue and the return to the landmark nuclear deal are too important to be subjected to such childish tactics. Furthermore, such hostile actions are contrary to any good-faith negotiations with Iran in the midst of nuclear talks. They will only further alienate the Iranian people from the West and persuade them that the United States has hostile intentions against them, as the Iranian government claims.

It is not clear whether President Biden or senior officials in his administration were involved in or informed of this move. The State Department spokesman Ned Price refused to comment, indicating that US officials working on Iran were likely not in the loop.[3]

If true, this by itself is alarming and shows that neocon influence in all US administrations, Republican or Democratic, is so dominant and widespread that they take major decisions on their own initiative, even against the wishes of their bosses. The same was true of the influence of the neocons under the Clinton and Bush administrations. Even under the Obama administration, the Treasury seemed to pursue its own policy of imposing sanctions on Iran despite the nuclear deal, which was the most important policy initiative by President Obama.

In May 2021, after the United States imposed sanctions against the Islamic Radio and Television Union, the pro-Israeli Washington Institute for Near East Policy praised the move, but called for additional action against traditional media entities and “affiliated television channels, radio stations, websites, and related organizations around the region.”[4] This move seems to be in line with the demands of that think tank and other hawkish pro-Israeli entities.

However, regardless of who has been responsible for this short-sighted and counterproductive action, global public opinion will blame the Biden Administration for it. During the presidential campaign, Biden tried to distance himself from Trump’s illegal acts and unilateral sanctions, and after being elected he announced that “America was back”. However, these moves make it difficult to decide which America is back, because such actions are reminiscent of the illegal and chauvinistic behaviour of the Trump Administration, especially the intensely anti-Iranian campaign waged by former Secretary of State Mike Pompeo.

During his inaugural address, President Biden said: “We will lead not merely by the example of our power but by the power of our example.” We have seen the effects of the US example of power in many disastrous wars fought in Iraq, Afghanistan, Libya, Somalia, Syria, Yemen and elsewhere.

After thousands killed and trillions spent over the past 20 years, US forces are withdrawing from Afghanistan in what should be regarded as a humiliating defeat. Even before the remaining US forces have left, the Taliban forces are resurgent and are advancing in various parts of Afghanistan, and the Afghan government is in a very shaky position.

The trip by Afghan President Ashraf Ghani, and Chairman of the High Council for National Reconciliation Dr Abdullah Abdullah to the White House on 25 June has been described by Afghan officials as most disappointing. Apart from platitudes that the United States was committed to supporting the Afghan people, there was no clear or tangible offer of assistance. The Afghan government could not check the advances of the Taliban when thousands of US forces were stationed in Afghanistan. It is not clear how they can stem the tide when US forces have withdrawn completely.

As for the force of the values, freedom of speech is one of the strongest American values, enshrined in the First Amendment. By censoring foreign websites and radio and tv stations, any pretence of upholding freedom of speech sounds hollow.

All this makes it clear that in its foreign policy the United States under the Biden Administration, as under the Trump Administration, has no strategy, no vision and no imagination for dealing with complex global issues, apart from resorting to force or coercion. Biden is still continuing the illegal sanctions imposed on Iran by Trump, and has been dragging his feet in re-joining the landmark nuclear agreement.

He has failed to reverse Trump’s illegal policies towards the Arab-Israeli conflict and the sham agreements forced on some small Arab states in the name of the Abraham Accords. Not only did it not condemn Israel’s policies of ethnic cleansing in the West Bank and its ferocious attack on besieged Gaza, it is even increasing US military support for Israel. It has not called on the ultra-right new Israeli government to stop the expansion of illegal settlements and annexing more Palestinian territory.

Biden’s anti-Russian and anti-Chinese crusade, resulting in a new Cold War between the East and the West, is making the world much more dangerous than before. In the midst of the pandemic and the threat of climate change, the United States is spending billions of dollars on new nuclear-armed submarines.[5]

What the United States and the world need is a thorough rethink of US foreign policies and a serious attempt to uphold its values, for a change, in deeds and not in words alone. The continuation of the current state of confusion, unipolar policies, neglect of US values, exceptionalism and disregard of international law will prove disastrous for the United States and its relations with the world.

[5] “Do We Really need Multi-Billion-Dollar Naval Vessels that can deliver 16,128 Hiroshimas?” https://www.juancole.com/2021/06/billion-vessels-hiroshimas.html