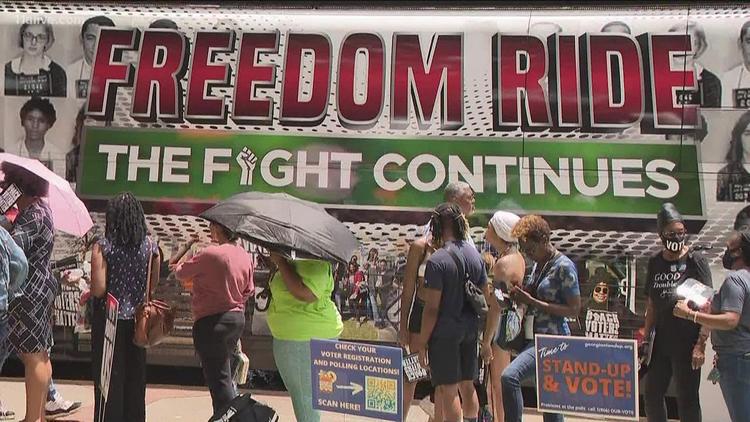 This is the civil rights issue of our time, and it’s a fight we can and must win.

( Otherwords.org) – We suspected it for years, and now we know it: Jim Crow was never dead. You might even say he was too mean to die.

We know this because in too many places, the forces of racism are raging as laws aimed squarely at suppressing the votes of Black and brown Americans pass in state after state. New voting restrictions became law in 14 states this year, and far-right lawmakers are pushing new measures to suppress the vote in many more.

This is a bitter pill for those of us who came of age during and after the civil rights movement of the 1960s — when we fought alongside our parents and grandparents, and so many even laid down their lives, for voting rights.

We know these new laws have the same immoral aim to break the spirits and silence the voices our creator gave us. And that is why these times cry out for the moral leadership of an institution at the heart of the Black community: the Black church.

Over the Sabbath weekend of June 12-13, our two churches joined many Black churches nationwide in calling on congregations to take action against this “Jim Crow 2.0.”

Churches from Philadelphia to Tuskegee, Alabama and from Detroit to Smyrna, Georgia asked worshipers to sign a petition in favor of S1, the federal For the People Act to protect voting rights. We asked them to contact the White House to make their case. And we asked them to pray for justice to prevail.

We are calling on Washington to act because through the decades, when states have tried to deny rights to people of color, the federal government has had to assert its constitutional authority and moral obligation to protect those rights.

This month we saw the Justice Department acknowledge the voting rights emergency in our country and announce a major campaign to stop it. That is very welcome. But it is not enough.

We need federal legislation — most urgently the For the People Act, which would invalidate states’ current voter-suppression efforts. The John Lewis Voting Rights Act, which would prevent many such laws in the future, is also vitally important.

To those who won’t commit, let us be clear: When racism, bigotry, and voter suppression are happening all around you, inaction is not a moral position.

We may not be able to change the minds of the dyed-in-the-wool enemies of voting rights. And we know who many of them are. But President Joe Biden and Vice President Kamala Harris have the ears of an entire caucus that purports to favor voting rights, including many lawmakers who

clearly would not be in office but for Black voters.

Our message to Biden and Harris is this: Use the influence that only you have. Use it to protect voting rights. Use it to get the For the People Act over the finish line this summer.

This activism might surprise some, but it’s nothing new for us. Black churches have provided guidance and a moral compass throughout our country’s civil rights struggles. This is the civil rights issue of our time, and it’s a fight we can and must win. We hope you’ll join us.

Rev. Levon C. Manzie is pastor of St. Joseph Baptist Church in Mobile, Alabama. They are members of People For the American Way’s African American Ministers in Action. This op-ed was distributed by OtherWords.org.