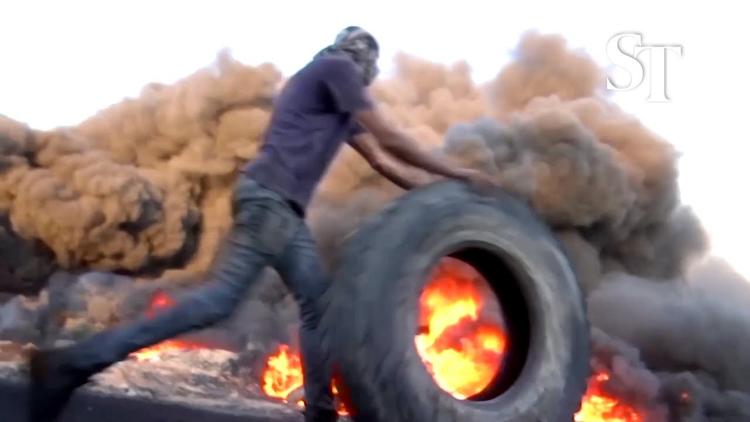 Ann Arbor (Informed Comment) – 73 Democratic Congressional representatives wrote a letter to President Biden on Friday urging him formally to withdraw from Trump’s so-called “deal of the century,” which actually authorized Israel unilaterally to steal large swathes of Palestinian land. And these representatives frankly say this.

They want an outbreak of frank talk and a reversion to the discourse of international law. The Palestinian Territories are militarily occupied by Israel. Period. The late casino mogul and Likudnik Sheldon Adelson attempted to make calling Palestine “occupied” taboo in US politics, wielding his checkbook in that battle and sidelining Chris Christie when he would not agree.

Not only are the Palestinians an occupied population, these representatives say, Israel’s squatter-settlements in Palestine are illegal. They are illegal, by the Fourth Geneva Convention. Except in the anti-Palestinian US, this point of law is disputed nowhere in the world.

What is new here is that these Democrats highlight the issue of the Israeli expulsion of Palestinians from their own property in Sheikh Jarrah and Silwan in the East Jerusalem area.

Also, the new government of Israel objected to the US re-opening of its Jerusalem consulate for Palestinians, but these representatives demand it.

In their letter, they put forth eight major points:

“● Formally withdraw the previous administration’s “peace plan” which paved the way for possible unilateral annexation of territory and reaffirm as official United States policy the principles for resolving the conflict referenced by the House of Representatives in H. Res. 326 (116th Congress);

● Insist through all channels that Hamas stop further rocket attacks against Israel;

● Quickly fulfill your welcome commitment to reopen a separate U.S. consulate in Jerusalem [for Palestinians];

● Make clear that the United States considers settlements to be inconsistent with international law by reissuing relevant State Department and U.S. customs guidance to that effect;

● Strongly oppose the forced expulsion via eviction of Palestinian families from their homes in East Jerusalem and throughout Palestinian territory;

● Ensure that all relevant official U.S. documents and communications once again consistently refer to the status of the West Bank and Gaza Strip as occupied;

● Ensure that all remaining congressionally appropriated aid to the Palestinians is disbursed without undue delay, following all applicable U.S. laws and vetting standards for recipients and implementing organizations, and;

● Consistently and proactively issue firm public condemnations of specific actions that violate the rights of either party or undermine the prospects for peace.”

About one third of the Democrats in Congress signed this letter, which, since it demands even-handedness and accuses Israel of acting illegally and protests Israeli expulsions of Palestinians, would be very unwelcome to the Israel lobbies. If we include Democrats who did not sign because they thought the letter did not go far enough, the proportion would be even larger. In fact, the letter is a sign of how former Israeli prime minister Binyamin Netanyahu, having heavily courted Republicans, lost the support of a substantial portion of the Democratic Party for his colonial policies, including drive to annex large portions of the Palestinian West Bank.

The letter was spearheaded by Reps. Gerry Connolly (D-VA), Peter Welch (D-VT), and Jan Schakowsky (D-IL). Although the letter seems shockingly frank in the era of right-wing cheer leading for Israel’s extremist political parties and their colonization project in the Occupied Palestinian Territories, it simply asks Biden to return to the U.S. status quo of only a few years ago. Perhaps because they did not think it went far enough, some Democratic Socialists of America such as Alexandria Ocasio-Cortez, Rashida Tlaib or Cori Bush are not listed as signatories, though Jamal Bowman, the fourth DSA member in Congress, did sign. So too did Squad member Ilhan Omar, who is to the right of most other members of the Squad (Ocasio-Cortez, Tlaib, Bush, Omar, and Pressley).. Another Squad member, Ayanna Pressley, signed, though she skews to the right on the Palestine issue. Several Jewish American representatives in addition to Schakowsky signed, showing that distaste for Israel’s land grabs and backing of squatters in Palestine is recognized by many in Congress as a violation of the basic norms of ethics and international law regardless of religious background.

Palestinians wage a battle to stop a new Jewish settlement