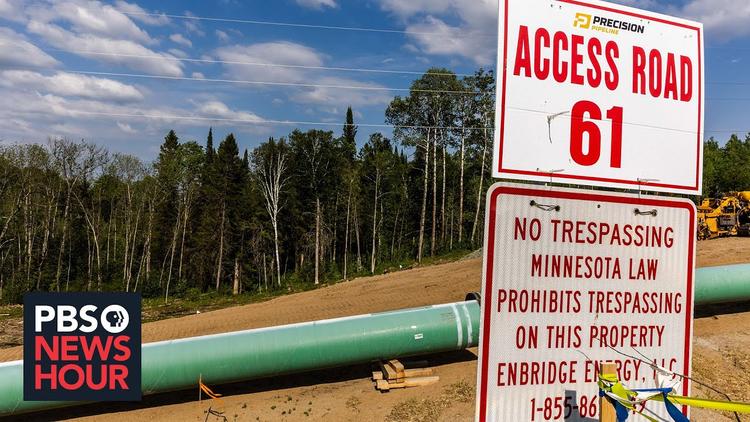 The fight over a northern Minnesota pipeline project could have global repercussions.

( Otherwords.org ) – A decades-old pipeline called Line 3, run by the Canadian company Enbridge, is in the midst of a controversial upgrade. That has sparked fierce resistance from Indigenous communities living along the route.

Line 3 is being replaced to transport nearly 800,000 barrels of dirty tar sands crude oil per day from Alberta, Canada to Superior, Wisconsin. The pipeline cuts across northern Minnesota, where the Anishinaabe people have treaty rights to hunt, fish, and harvest wild rice and maple syrup.

The United States has more pipelines, both existing and planned, than any other nation on earth. Some of these — like the Keystone XL and Dakota Access pipelines — have become major sources of protest.

Indigenous leaders are now calling on all Americans to demand an end to the Line 3 project as well. One of them is Nancy Beaulieu, co-founder of the Resilient Indigenous Sisters Engaging (RISE) Coalition, and the northern Minnesota organizer for 350.org.

“As Indigenous people, we have the inherent responsibility to protect the waters and all that is sacred,” she told me. And as settlers — people who signed those treaties with our ancestors — [other Americans] have an obligation to uphold those treaties.”

According to Beaulieu, President Biden could cancel the Line 3 project with “the stroke of a pen” — and she’s perplexed why he hasn’t. Biden has pledged to slash U.S. emissions by 50 percent in less than a decade. Canceling Line 3 would help meet that ambitious goal.

In the past, Enbridge has responded to attempts at regulation with shocking contempt.

Last year in Michigan, Governor Gretchen Whitmer demanded the closure of another decades-old pipeline run by Enbridge called Line 5. That pipeline, first built in 1953, carries more than half a million barrels of crude oil per day under the Great Lakes. It’s had dozens of leaks over the years, spilling more than a million barrels of oil.

The Great Lakes hold more than a fifth of the entire world’s fresh surface water, which remains in jeopardy as long as the aging Line 5 pipeline continues to operate. Yet rather than comply with Whitmer’s order, Enbridge simply refused to shut it down.

Enbridge is taking a similarly defiant position in northern Minnesota. The company is even paying local Minnesota law enforcement for costs related to policing the resistance. The Canadian fossil fuel corporation is essentially hiring U.S. public servants to protect their private financial interests — against the public.

Indigenous leaders like Beaulieu say Line 3 threatens their treaty rights to pristine land and water. The facts are on their side.

According to Greenpeace, Enbridge’s pipelines have leaked hundreds of times, spilling millions of gallons of hazardous material and contaminating water in at least 30 cases. The original Line 3 project caused the largest inland oil spill in the nation’s history in Minnesota in 1991. And Line 5 dumped hundreds of thousands of barrels of tar sands into Michigan’s Kalamazoo River in 2010.

Meanwhile, fossil fuel companies have been laughing all the way to the bank. Since 1990, the world’s top four oil and gas companies have accumulated nearly $2 trillion in profits.

However, the climate justice movement is slowly turning the tide.

A Dutch court recently ordered Shell — one of those top four — to slash its emissions by 45 percent by 2030 in a historic case that could inspire similar legal challenges. Another, ExxonMobil, is being challenged internally by a shareholder who ousted at least three board members over the company’s climate policies.

Joining such efforts are on-the-ground movements like the one opposing the Line 3 pipeline in Minnesota.

“We are going to peacefully resist this pipeline, and we’re calling on all our allies across Turtle Island to come here to northern Minnesota,” Beaulieu said, using a Native American term for North America. “Treaties don’t only protect us as Native people. They protect those people that signed the treaties as well.”

Sonali Kolhatkar is the host of “Rising Up With Sonali,” a television and radio show on Free Speech TV and Pacifica stations. This commentary was produced by the Economy for All project at the Independent Media Institute and adapted by OtherWords.org.