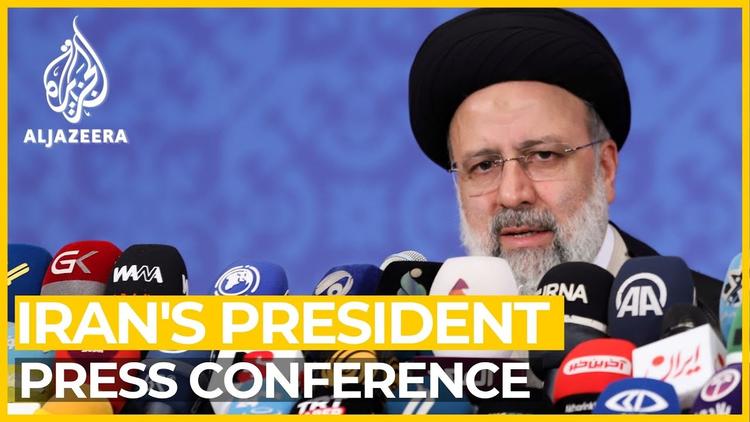 When Iranians elect a new leader, the world watches. So the election of Ebrahim Raisi, a hardline right-winger, to replace the more centrist Hassan Rouhani, is global news of some significance.

Raisi is the choice of Iran’s socially arch-conservative and politically anti-reformist “deep state”. This ideological core of the state includes the powerful Islamic Revolution Guard Corps and the supreme leader, Ayatollah Ali Khamenei, who hovers at the centre of an intricate political system.

Raisi would also not have been voted into office without the disqualification of competing candidates by the Guardian Council, which vets candidates for their political and religious credentials. As a result of this skewed process, only two rather lacklustre “reformists” were left standing.

In this election in particular, the spectrum of choice was seriously narrowed, which benefited Raisi and the conservative camp. In the 2017 election, Raisi lost to the rather more pragmatic Rouhani by quite a decisive margin.

Having said that, Raisi has now convinced 17.9 million Iranians that he is the right candidate. But the turnout, at 28.9 million, or 48.8% of the electorate, was the lowest for any elections held since the Islamic Republic was formed after the revolution in 1979.

This is due to two factors. The first is a real disillusionment with the Rouhani administration and the left-of-centre (or reformist) politicians that represented the core of his support, in particular their hypocrisy regarding social reforms and their incompetence in terms of economic policy.

The second is the decision by former US president Donald Trump in 2018 to quit Iran’s nuclear deal with the west and extend sanctions. This has impoverished the middle-income class of Iran, the natural constituency of the reformists. Under such circumstances, the only candidate representing the reformist camp, didn’t stand a chance.

It’s a similar story to Mahmoud Ahmadinejad’s election in 2005. Ahmadinejad, the darling of the right-wing in 2005, managed to win, largely because overtures to the US by reformist president Mohammad Khatami (1997-2005) had not been reciprocated by the US and Europe. In both elections it was fairly easy for the Iranian right to represent reformists as sell-outs and unpatriotic fools.

It has been widely noted that voter turnout in this year’s elections was the lowest in the state’s history. This can’t be merely attributed to the pandemic. Rather, it reflects a long-term disillusionment among many Iranians with what they see as a self-serving political establishment and with its candidate.

Not voting is, therefore, a form of protest and resistance against empty sloganeering and the illiberal policies of the state – whether right or left wing. Not engaging in an election with limited options is a vote for civil resistance. For many Iranians, the candidates were seen to have only a nodding acquaintance and a faint acknowledgement of the social and political calamities in Iran.

In Iran as elsewhere, real reforms emanate from civil society, from those individuals who wield the informal power to dissent. In my latest book, “What is Iran?”, I argue this is pluralistic momentum. Change in Iran is always forced upon the state from the bottom up.

The recurrent spasm of demonstrations, the latest started in 2019 and ended just before COVID struck, are a good indicator that Iranians continue to voice their demands. The yardstick of freedom which the revolutionaries of 1979 set massively high is a real historical driver for this momentum towards change, even among some so-called “hardliners”.

When Ahmadinejad took over the presidency in 2005, Israeli commentators mocked that their intelligence agency, Mossad, couldn’t have placed a better candidate in the country as Ahnadinejad’s escapades seriously deteriorated Iran’s international image. Similarly, many Iranians (correctly) felt the election of Donald Trump would destabilise the US.

With Raisi it’s similar again. Ironically for his political allies in the deep state, including the mighty Islamic Revolutionary Guard Corps (IRGC), he too is likely to weaken the Iranian state, even the institutions that paved the way for his election. As a politician, Raisi lacks both legitimacy and acumen to unite the fractured political landscape in Iran.

Ayatollah Khamenei seemed to have recognised this danger when he said in the build up to the election that some candidates were treated unfairly. He seemed to be wary of the voter apathy that the qualifications buttressed.

Ultimately, the late revolutionary leader Ayatollah Ruhollah Khomeini recognised the importance of popular legitimacy of the system. Compared to him, Khamenei appears like a hapless CEO of an ailing political conglomerate. On this occasion, the system that he is meant to popularise has delivered a problematic outcome.

Indeed, Khamenei can’t be oblivious to the fact that Raisi has been accused of involvement in some of the worst human right atrocities in Iran and that he is a divisive politician because of that. Undoubtedly, the legitimacy of the state that Khamenei stands for has been compromised by this election.

What are the consequences for the rest of the world? It’s almost certain that Iranian foreign policy will follow the trajectory of the past few years. Negotiations over the nuclear deal will continue. But unlike the outgoing president, Raisi’s political fortunes don’t hinge upon reaching an agreement. Therefore, he will be less likely to compromise.

Elsewhere, Iran will try to bargain its way out of isolation with China and Russia and the country will continue to support its allies in the region and try to reach out to powerful countries in the global south.

So there will be continuity. But given Raisi’s stated political views, the more progressive image projected by his predecessor Rouhani will be replaced by a rather more retroactive language of “defiance” by the new ultra-conservative president.