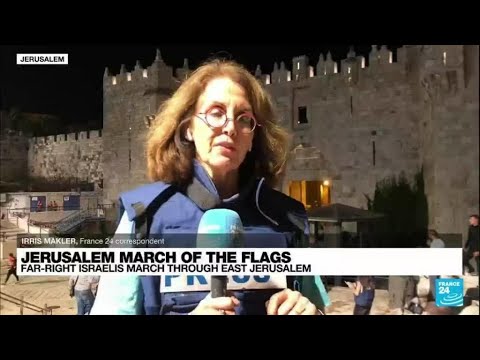 Ann Arbor (Informed Comment) – Dia Hajj Yahya writes at the Israeli newspaper Arab 48 that because of extreme right Israeli squatters’ deliberately provocative march through Palestinian neighborhoods, 33 Palestinians were injured during confrontations with the Israeli Occupation authorities in the area of the Old City in occupied Jerusalem on Tuesday, one of them by live fire, and at least 17 were jailed.

The old government led by Binyamin Netanyahu authorized the march, against the best judgment of then Defense Minister Benny Gantz, who had wanted to cancel it this year. Netanyahu, in contrast, insisted that it be held. The new government of Naftali Bennett could have faced a challenge if the march produced big Palestinian protests, but it appears that it passed without any big escalation. The government did prevent the militant squatters from marching through the heavily Palestinian Old City.

The occasion for the crackdown on the Palestinians was what the squatters call “Flag Day,” when they proceed with Israeli flags through Palestinian neighborhoods in East Jerusalem to commemorate the opportunistic 1967 Israel grab of the Palestinian West Bank. Since then, Palestinians have been a stateless, militarily occupied population and squatters have stolen much of their land and water, cut them off from other villages by checkpoints and settler-only highways, and chopped down a million of their olive trees, a keys source of Palestinian income. The squatters, who have stolen from the Palestinians and intend to steal more, displacing them from East Jerusalem, in this way rubbing the occupied population’s noses in their life of defeat and ongoing humiliation.

The Flag march arrived at the Wailing Wall on Tuesday evening, after its participants moved from Damascus Gate, where they had assembled, and where they chanted “Death to Arabs,” “May your village burn,” and “There will be a second ethnic cleansing (Nakba),” under the protection of the Israeli police. The Nakba was the 1948 expulsion by Israeli forces of some 720,000 Palestinians from their homes in Palestine, which then became Israel.

Prime Minister Bennett’s coalition partner, centrist Yair Lapid, condemned the chants as “not Judaism and not Israeli.” Bennett himself, however, is on the religious far right and has said horrible things about Palestinians.

Itimar Ben-Gvir, a prominent Israeli far right extremist in Parliament from the Religious Zionism Party who celebrates the murder of Palestinians, was among the marchers and was one of the sponsors of the procession, according to Al Jazeera. BBC Monitoring Hebrew reports that he tweeted that he would be there “waving the Israeli flag,” adding, “We don’t need permission from Hamas or Islamic Jihad to march in the capital of Israel. The march will take place in spite of them.”

The same source notes that four Palestinian Israeli members of parliament, Ahmad Tibi, Ayman Odeh, Osama Saadi and Sami Abu Shehada, came to the Damascus Gate and voiced criticism of the cabinet for permitting the march.

Al Jazeera reports, “A second video shows another woman, identified as Hala Abu Ghureiba, raising the Palestinian flag in the face of the Israeli nationalists during the so-called Flag Parade, before she was knocked to the ground by Israeli forces.”

Some 16 others were arrested on charges of throwing stones, assaulting police, or generally disturbing the peace. The Palestinians were shouting “It, it, it is Arab Jerusalem.”

Six Palestinian protesters had to go to hospital for their injuries, one of them hit with live ammunition by Israeli security. The occupation forces refused to allow Red Crescent staff to transport the wounded, and at one point fired on their vehicle, preventing its teams from moving freely.

About a thousand Israeli squatters participated in the ritual humiliation of the Palestinians via the Flag Day procession, with two thousand Israeli police providing them security according to Yediot Aharanot. The march was much smaller than expected; estimates of likely participation had ranged up to 5,000, but only a fifth that number actually came.

Those marching performed a “flag dance” at Damascus Gate, a Palestinian area, to humiliate the local residents, shouting “Death to Arabs.”

Some Palestinians in the Occupied West Bank and in Israel proper attempted to go to Jerusalem to mount a counter-demonstration, but apparently without much success.

In contrast, they did hold protests around the West Bank and in Israel against “Flag Day,”
according to Al Jazeera. At some of the rallies attendees burned pictures of former prime minister Binyamin Netanyahu and current Prime Minister Naftali Bennett.